'Return of the Psammead' - the Television Series Content from the guide to life, the universe and everything

Five Children and It | Return of the Psammead 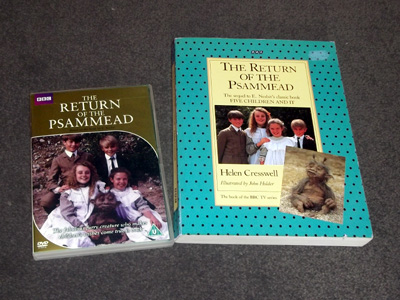 In 1907 four children in the Garsington family - George, Ellie, Phillip and Lucy - are unexpectedly sent to stay with their great aunt in a large rural home called the White House when their younger brothers catch scarlet fever. While their parents stay at home to care for their young siblings, the older four are looked after by their nurse Bessie at the White House. Their Great Aunt, Miss Constance Marchmont, does not like children and appears to have a heart of stone. She refuses to let the children call her by her Christian name as that is too familiar, and insists they call her the more formal Aunt Marchmont. She is also is planning to evict Dawkins and his young daughter Little Lil from their home on her estate. This is because of the influence of Mr and Mrs Dobbs, Marchmont's housekeeper and groundskeeper, who are scheming to get Dawkins replaced with their nephew. As Lil has consumption and her mother has recently died, the Garsingtons quickly decide they need to prevent this.

Near their aunt's home they discover the last Psammead or Sand-Fairy, who can grant one wish a day that will last until sunset. Can magic or golden deeds melt their aunt's heart of stone, or will she go off her chump? What is the significance of the words 'Norah is a cross-eyed piggy-wiggy'? What will happen when Dawkins goes hunting for rabbits in the Psammead's sandpit?

Return of the Psammead: The Television Series

Building on this success Cresswell quickly wrote a sequel to Five Children and It entitled Return of the Psammead in 19922. She adapted this for television in 1993. This adaptation used the same animatronic puppet Psammead and used many of the same locations, principally around Wolfeton near Dorchester. It also had the same opening music and magical closing song.

The sequel series was very similar to the original, but less episodic. A strong narrative thread running throughout was about trying to ensure Li'l Lil would not be evicted from her home while trying to discover what the Dobbs family are up to.

Difference with the Novel

Helen Cresswell's adaptation does include some differences from her own novel. For a start, the opening scene is different. After a prologue in which it is explained how this sequel to Five Children and It does not contradict The Phoenix and the Carpet or The Story of the Amulet, in the novel the children are first seen in their home. When it is realised that their younger twin brothers have scarlet fever, the children are sent away to their great aunt's house. The television series opens with their having all but completed that journey and being on the train.

Perhaps the biggest difference is in the episode in which they travel into the future. In the novel they travel 80 years into the future and try to take £9.43 worth of shopping from a supermarket, but they 'bunk as they are not flush of chink and their tin's no good3'. In the television series they grab a large block of cheese, cornflakes, frozen pizza, pork pies, ham, a packaged sandwich, biscuits, cocoa curls, chocolate fudge slices and skittles, which costs £20.43 - £11 more than in the novel. They also encounter the politest, if not poshest, supermarket employee ever. After this they go to their home4 which they discover is now the home of Stella Dawkins. In the novel she is a very young, lonely girl who locks them in the summerhouse. In the television series she is a young teen hosting a disco party complete with cans of drink and packets of crisps, as well as having a dancing style that can only be described as similar to that of a drunken Thunderbird puppet. The disco ends with the children dancing the conga back into Edwardian England. The television series does have the added detail of a photograph of Dawkins, Lil and Bessie being displayed in the future before it had been taken. Both the novel and television series feature a parrot in the house that is identical to their own pet, Methuselah.

The other main change is that there are two further chapters in the novel that do not make it into the finished production. In these, after Aunt Marchmont had been told by Lucy that her thimble was magic, she wishes that it really was a magic thimble. This means that when the children wish they were with smugglers they find themselves hiding in a cave from desperate men who are convinced they are spies for the Revenue. None of this appears in the series, nor does a sweet scene in which Lucy saves the Psammead from the rain with an umbrella.

The only cast member to return from Five Children and It was Francis Wright as the Psammead. He is a highly-acclaimed puppeteer whose work includes Labyrinth. Anna Massey is a BAFTA-winning actress, winning the award for the 1986 adaptation of Anita Brookner's novel Hotel du Lac. She is perhaps best-known for starring in Peeping Tom (1960) and starred as Miss Prism in the 2002 adaptation of The Importance of Being Earnest.

As the television adaptation is a modern sequel to a classic novel by E Nesbit, how do you convince the audience immediately that the new series is a worthy part of her legacy? As Nesbit is perhaps best known for The Railway Children, showing the children of Return of the Psammead arrive by steam train strongly ties the television series in with that tradition. Yet very few steam railways in England have vintage stock that dates from the era in which Return of the Psammead is set – how could the producers best ensure the series begins with a strong, period setting?

The answer is, of course, by filming at the Isle of Wight Steam Railway, which even today remains at heart a Victorian or early Edwardian branch line. The children travel on a train pulled by Terrier engine W11 Newport, a tank engine built in 1878 that came to the Island in 1902 and had been returned to service after a lengthy restoration in 1989. Newport can be seen pulling two carriages. The first, number 465, was built in 1864 and has been on the Isle of Wight since 1897. This, classed as a 4-wheel 4 compartment composite carriage, was the first grounded carriage body to be restored to passenger service by the Railway and whose restoration in 1986 was recognised with the Association of Railway Preservation Society's Best Preserved Carriage award. The carriage that the cast are seen travelling in is 4112, built in 1898 and in service on the Island since 1924. This 4-wheel saloon brake third carriage had only recently been restored before filming in 1991. Both carriages had spent time being used as bungalows before their return to service.

The train passes beneath Deacons Lane Bridge and stops at Ashey Halt to let the characters out. This stretch had only just been reopened following the Isle of Wight Steam Railway's 3½ mile extension to Smallbrook Junction in 1991, and the cast used Ashey Halt station before it was fully open to the public as a request stop in 1993.

Return of the Psammead is a worthy sequel series to Five Children and It, retaining the spirit and charm of the earlier series and continues to exude a sense of magic. The scenes set in the 'future' are perhaps the most memorable, even if 80 years from 1907 would be the past and 1987, rather than 1993 when the series was first broadcast. The Garsingtons are confused by trouser-wearing women, bungalows, and supermarkets where customers help themselves to what they want rather than being given their desired purchases by the shopkeeper.

Of course the highlight is the scenes featuring the Psammead, one of the greatest animatronic creations of the late 20th Century. In the adaptation of Five Children and It it was obvious that every scene featuring him was set in the same spot, but in this series he is much more mobile. In the middle of the series the Psammead is 'Itnapped' by George when he discovers that Dawkins and his fierce hunting dog Tiger plan to go hunting and shooting in the sandpit, to prevent his being harmed. George takes the Psammead to the White House's summerhouse and leaves him in a basket, not realising that the Psammead needs sand or it will die. This not only means that the Psammead is seen outside the sandpit in baskets, perambulators and in the countryside, but other characters unaware of the Psammead's existence have their wishes granted. When the Psammead attempts to escape the summerhouse and return to the sandpit, it goes missing and gets lost, causing everyone great distress.

Return of the Psammead seeks to develop beyond the episodic format of Five Children and It. Unlike the first series there is a degree of character development. At first the fearsome Aunt Marchmont, who enjoys a quiet life dedicated to cross-stitch and order, appears a right 'sew and sew' or 'Sunday school prig' as the children put it. However, over the course of the series it is revealed that her own childhood was unhappy, being a lonely, only child raised by a harsh nanny named Norah. Since then she has spent her whole life sewing cross-stitch because she was expected to as a child7, despite not actually enjoying it. Over the course of the series her clothing becomes lighter in colour and less severe in style. She comes out of her dark room and into the light as she warms to the children and her (believed) heart of stone melts.

1Followed by The Phoenix and the Carpet and The Story of the Amulet.2Helen Cresswell is not the only author to have written a sequel to Nesbit's novel; in 2012 Jacqueline Wilson wrote Four Children and It about a modern family finding the Psammead while Kate Saunders in 2014 wrote Five Children on the Western Front set a decade later, in which the original children encounter the horrors of the Great War.3Run off as they don't have much money and what they have is no longer legal tender.4In the television series they are fascinated by the fridge freezer, despite having all but ignored the chilled and frozen goods sections in the supermarket they were in earlier.5Later renamed 6336 by Southern Railways.6Good job George wasn't killed in the World Wars...7Although she did once rebel enough to secretly sew the hidden words 'Norah is a cross-eyed piggy-wiggy'.