Andrew Carnegie: Steel, Money and Culture Content from the guide to life, the universe and everything 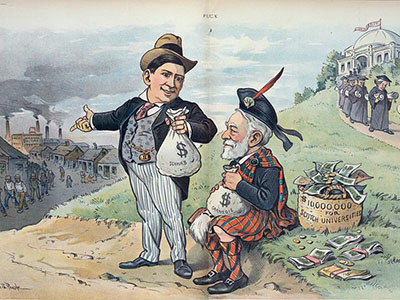 Andrew Carnegie [pronounced 'Car-NEH-ghee'] (1835-1919) was one of the human wonders of the world. He combined, in equal measure, energy, determination, curiosity, generosity and sheer pigheadedness. Carnegie believed in the Gospel of Wealth: the idea that western civilisation was supposed to produce rich entrepreneurs, who were then expected to use that wealth to benefit others. He also believed that dying rich was a disgrace, and so gave away 90% of his wealth during his lifetime. Carnegie opposed imperialism, loved learning, and left his name to libraries and concert halls. He loved his adopted city of Pittsburgh, Pennsylvania1 with all his heart – though many of his fellow Pittsburghers, during his lifetime and since, have not returned the compliment. What made Carnegie such an influential and sometimes controversial figure?

To get at the man's story, it is probably best to go back to the beginning. Carnegie was born in a one-room cottage in Dunfermline, Scotland2 in 1835. There, the weavers had fallen upon hard times.

If It Wasna for the Weavers

Carnegie spent the first 13 years of his life in Dunfermline, influenced by hard work and the inspiration of Robert Burns and other Scottish authors, whose works he learned in the local school, where he began attending at the age of eight. His father, a handloom weaver, couldn't find enough work to keep the family going. Scotland was starving in the 1840s, so the Carnegies took the plunge: borrowing ticket money, they boarded the Wiscasset, a ship bound for America from Glasgow. They arrived in New York on 14 August, 1848.

The Carnegie family, like many new Americans, were desperately poor. Settling in Pittsburgh, they found work wherever they could. Everyone in the family worked. While the older Carnegie men worked in the cotton mills, mother Margaret Carnegie bound shoes for a living. Little Andrew worked 12 hours a day, six days a week, as a bobbin boy in the cotton mill. He was paid $1.20 a week.

In 1850, things got better for Andrew. He got a job at the Pittsburgh office of the Ohio Telegraph Company, for the amazing salary of $2.50 a week. This was the moment when people found out something unusual about young Andrew Carnegie: he had abilities. Instead of writing the telegraph signals down in order to interpret the code, he learned to hear the messages, and translate the language of Morse code in his head. His skills impressed the telegraph company. Within a year, Carnegie had achieved the status job of telegraph operator.

Carnegie was an autodidact. You had to teach yourself, back then, if you wanted to learn and weren't rich. There was no time and no money for schools for the likes of Andrew Carnegie. But his new job had a perk: free theatre tickets. Carnegie saw Shakespeare, and it was a revelation. Colonel James Anderson of Pittsburgh opened his personal library – 400 volumes – to poor working boys, once a week on Saturday night. Carnegie read and read.

In 1853, Carnegie got a job as a telegrapher for the Pennsylvania Railroad Company. The salary was good: $4.00 a week. Even better were the investment opportunities. Carnegie's boss was involved in insider trading, and he let his young employee in on the deals. Carnegie made lucrative investments and vital contacts for his future career. The Gospel of Wealth was on its way – and if the meek weren't going to inherit the Earth, a stubborn workaholic just might manage it.

Growth of an Empire

During the US Civil War (1861-1865), Carnegie was instrumental in keeping the Union's telegraph lines working and railroads running. In fact, he argued jokingly that he was the first casualty of the war. When he personally freed a trapped telegraph wire, it snapped and hit his cheek. He was left with a scar as souvenir of the conflict.

Towards the end of the war, Carnegie invested heavily in oil fields, reaping a huge profit. His purchase of property at Oil Creek, Pennsylvania, the first commercial oil field, yielded $1 million in one year. After the war, Carnegie made even more money: by becoming involved in the iron and steel industries. His adoption of the new Bessemer conversion process for steelmaking, along with his use of vertical integration – a business strategy that combined industries – was a wild success. By the late 1880s, Pittsburgh was outproducing the UK in steel. The hundreds of thousands of immigrants who poured into the region from all over Europe kept the steel mills of the Allegheny, Monongahela, and Ohio rivers belching out smoke that spelled pollution and profit.

In 1901, Carnegie, with the help of financier JP Morgan, founded the US Steel Corporation. US Steel was a landmark: the first corporation in the world with a market capitalisation of over $1 billion. Any 'captain of industry' would be exhilarated. Carnegie had achieved the dream of the 19th Century. He'd gone 'from rags to riches'. Surely he longed for new worlds to conquer? If he did, they weren't on the shop floor.

Carnegie retired. He left the business end of things to his colleagues, such as Henry Clay Frick, and turned to his next important goal: getting rid of his personal wealth. He was determined not to die rich.

Besides his skill at making money, Carnegie had two great qualities: he was interested in literature, and he believed in philanthropy. Philanthropy was what the Progressive Era – the late 19th- and early 20th-Century belief system about social improvement – called these acts of endowment by rich, but generous people. Carnegie did a lot of it. You can find his name in many places: Carnegie libraries, Carnegie music halls, the Carnegie Leisure Centre in Dunfermline, (originally the public swimming baths constructed in 1879), the Carnegie Laboratory in New York City, to name but a few.

Carnegie's widespread library grants aided readers around the English-speaking world, from the UK to Australia. Carnegie never forgot how vital access to a personal library had been to his own development, and found a practical way to share this advantage with others. He also helped make cultural events more widely available to the public through his concert halls.

Carnegie's view of life was simple. A man with talents like his was supposed to spend the first part of his life accumulating wealth. Then, he was supposed to spend it for the benefit of others. This would make his life worthwhile. Whatever one may think of this philosophy, it is clear that Carnegie lived by it.

Industrialists like JD Rockefeller and Henry Ford built family dynasties, leaving their vast wealth to their sons. Carnegie, who married later in life3, had only one child, his daughter Margaret. Margaret was named after Carnegie's beloved mother, a hardworking and dedicated woman. Carnegie loved his wife and daughter very much, but he did not leave them his huge fortune. He provided for their material comfort, but put the bulk of his wealth to work in ways that made a social difference in the lives of many.

Carnegie liked to write, and was good at it. He wrote business books, travel accounts, a biography of fellow Scotsman James Watt, and a posthumously published autobiography. His book The Gospel of Wealth was influential in spreading his personal view of the goals of late 19th-Century industrialism. Carnegie had a lot of literary friends, including Matthew Arnold and Mark Twain.

Carnegie's views, which he expressed in his books and newspaper articles, were not always popular. British readers, in particular, were irked at Carnegie's insistence that republican government was the only right path for society. His attacks on the monarchy in Triumphant Democracy made him controversial in some quarters. Even more startling was Carnegie's opposition to imperialism.

In the late 1890s, imperialism was a popular policy in the US. American business, government, military and diplomatic leaders all agreed that the US should extend its influence in South America and across the Pacific. They would use just about any means necessary to achieve this goal. Within little more than a decade, the US had tolerated businesses' toppling Central American governments and setting up 'banana republics', usurping the sovereignty of Mexico, fomenting war in Cuba and the Philippines, and involving the US in China's Boxer Rebellion. The 'March of the Flag' was a popular idea with many Americans, but not all. Mark Twain and Andrew Carnegie strenuously objected. Socialist Eugene V Debs did, too – and that might have been the only point on which they all might have agreed4

Carnegie believed American imperialism was morally wrong and practically ill-advised. When the Spanish American War of 1898 caused the US to buy the Philippines from Spain for $20 million, Carnegie was furious. Knowing that the Philippine people did not want to become a territory of the US, Carnegie offered to pay $20 million of his own money to give them their independence. He got no takers, so he joined the Anti-Imperialist League, whose secretary was his friend Mark Twain.

The Anti-Imperialist League had prestigious members, such as former US presidents Grover Cleveland and Benjamin Harrison. Although the League didn't start much of a revolution, it did succeed in giving a voice to those in the US who opposed military support for business expansion and the oppression of native peoples in the Philippines and Hawaii. It took stubbornness and character to be an anti-imperialist – qualities Carnegie possessed.

Long after his Gospel of Wealth has been forgotten, and the Anti-Imperialist League reduced to a footnote in the history books, Carnegie's legacy lives on. Whenever someone at Carnegie Mellon University makes a new discovery – or when its computer wins a chess match – people hear the old Scotsman's name. He's remembered in the architecture of many a town and city, too.

Here are some other Carnegie memorabilia:

All in all, Andrew Carnegie accomplished what he set out to do. First he made a lot of money. In fact, he was the second-richest man in the world after John D Rockefeller. But unlike Rockefeller, Carnegie didn't stop there. He set out to repurpose his wealth, and he succeeded. The libraries, colleges, concert halls – even the cactus – are tribute to his Scots tenacity and the odd mixture of industrialism and cultural aspiration that was exemplified in late 19th-Century Pittsburgh.

Image credit: Library of Congress
1Pittsburgh, Pennsylvania is in the United States.2Dunfermline, Scotland, is in the United Kingdom – at least, as of the 2014 referendum.3Carnegie and his wife Louise spent their honeymoon on the Isle of Wight, sometimes lived in England, and kept a summer home in the Scottish Highlands. According to Carnegie, his doctor told him to avoid excessive sun exposure, so a Scottish castle was a perfect place for a summer home.4Twain and Carnegie were good friends. Hearing of Carnegie's impending retirement, Twain sent him a jocular letter asking to borrow $1.50 'to buy a hymnbook'. Twain sometimes teased Carnegie about his good works, addressing a letter to him as 'Saint Andrew'.