Henry Ford Content from the guide to life, the universe and everything 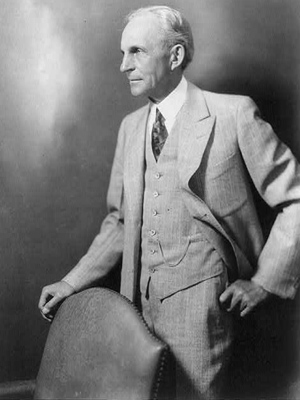 When one thinks of early 20th-Century America, one may picture a Model T automobile. It was not the first automobile in existence but it was the most widely used before World War I. This article is about Henry Ford, the man who created that car. To do so, Ford pioneered the system of mass production by using an assembly line. This would become the standard for years to come and shape the very nature of American manufacturing; it would spread worldwide for use in various industries.

In 1863, the US was in the middle of a civil war. This did not stop people from having children; in fact the author of this article had a grandfather1 born in Cayuga County, New York that year. Meanwhile in the (then) farming town of Dearborn, eight miles (13 km) west of Detroit, Michigan, Mary Litogot Ford, the wife of prosperous farmer William Ford, gave birth to Henry, the second of eight children on 30 July. On 2 January, 1871, Henry was due to appear at the one-room Scotch Settlement School in Dearborn, but because the weather was so cold and the snow so deep that week, his mother held him back until 9 January. One of his favourite teachers, John Brainard Chapman, allowed young Henry to tinker with watches during class as long as he did not make a noise by doing so. Henry had no love for farm animals but did seem to like the almanacs and their pictures of American products. As he grew up he was always dreaming of the day when machines would take some of the workload. His sister once scolded him for taking toys apart to see how they worked. In 1870, his father took him to see the locomotives in the railroad roundhouse. Then, when Henry was almost 13, his mother suddenly died. When he thought back on the time after her funeral he said, 'the house was like a watch without a mainspring.'

In 1879 Henry left the farm and took up lodging with an aunt. He got a job at a firm that built streetcars. However he got fired almost the same week for daring to fix something the older workers couldn't. He remarked later: 'I learned then not to tell all I know.' He then went to work in a foundry running a small milling machine. That job lasted less than a year. He returned to help his dad get the harvest in and then found another job. By the age of 19 Henry had mastered most of the mechanical inventions of his day and read publications like World of Science or Scientific American for new ideas. Among the places he worked was the Edison Illuminating Company, where he met Thomas Edison. Ford and Edison would later become close friends.

During the late 19th Century Michigan was a state with lots of wood, while coal had to be imported from other states. In 1882, one of Ford's neighbours John Gleason bought a steam engine to use for threshing and sawing timber. Henry was hired to run it. Paid three dollars a day, he travelled from farm to farm using the engine.

In 1883-4 Henry entered business school, learned about keeping books, and learned to speak like an accountant. He was a good student and learned to thread his way though the intricacies of high finance.

In 1903, with 28,000 US dollars and 12 stockholders, Henry Ford started the Ford Motor Company. He had to either invent things like spark plugs and carburettors or find someone to do it for him. A man named George Seldon had filed a patent on gasoline-powered automobile engines; the group which bought this patent started an exclusive association to license such vehicles. As the Association of Licensed Auto Manufacturers (ALUM) would not grant Ford a license, this put an initial crimp in Ford sales. After an eight year legal battle2, a Michigan Appeals Court ruled that Ford was not infringing on this patent.

Ford had planned for cars that were just alike and all painted black3. These would be built by a line of workers each doing a specific part of the job and no other. In this system, both parts and those making them were easily replaceable. The Model T would be a car well-built and within the price range of the normal workman. On a 60-acre site in Highland Park Ford put up his factory. In it each man stood in one spot while the conveyor belt brought the job to him and then took it to the next man. By this method a new car rolled off the assembly line in less than three hours. Riding on 30-inch (76cm) vanadium steel wheels, it was well suited for rough or muddy roads and on a smooth road the 177 cubic inch (2.9 litre) engine could easily make the car go 25 miles an hour (40km/h). By the end of 1913 they had sold half a million of them and Ford was a millionaire.

In 1914, the plant shifted to having three eight-hour shifts and raising the wage of every man working there to five US dollars per day so they could afford to buy the vehicles they were building. To get this kind of wage, an employee had to exhibit proper behaviour, not only at work but also at home. Ford even had a Sociological Department full of inspectors to conduct inspections of his employees' homes. This system of standardised lines and incentives to fit in the system became known as Fordism. Ford at one point stated:

Power and machinery, money and goods, are useful only as they set us free to live. They are but means to an end. For instance, I do not consider the machines which bear my name simply as machines. If that was all there was to it I would do something else. I take them as concrete evidence of the working out of a theory of business, which I hope is something more than a theory of business – a theory that looks toward making this world a better place in which to live.

In international circles this philosophy was sometimes confused with Fascism4, and rumours spread that Ford was the absolute dictator over his home city state and the government their took their orders from him. People completely overlooked the fact that elected officials got their offices the same way in Dearborn as in any other American city.

In 1916 over his personal objections, the Republican Party ran Ford for President. He actually got 32 votes at the Convention before Charles E Hughes from New York won and became the Republican nominee, narrowly losing the election in November to Woodrow Wilson. Also in 1916, Ford was concerned that the news media was overly representing the views of big bankers and so decided to start his own paper. It would accept no advertisements and have one page expressing what Ford wanted it to say. Ford wanted men who 'worked out not their ideas, but his'; thus the Dearborn Independent came into being. It sold for five cents a copy and had 16 pages per issue. President Wilson convinced Ford to run for the US Senate as a Democrat in 1918. He lost the election to the Republican Truman H Newberry. At the end of 1918 Ford resigned as president of the paper and put his son in that spot. However, he never completely let go of controlling what the paper said. In fact many of the statements made there were anti-Semitic5. As the Twenties became the Thirties and then the Forties, the concept of Fordism grew and was used as an example of American capitalism by Marxist leaders in the Soviet Union. Joseph Stalin was quoted as saying:

American efficiency is that indomitable force which neither knows nor recognises obstacles; which continues on a task once started until it is finished, even if it is a minor task; and without which serious constructive work is inconceivable.

Meanwhile in Germany, Fordism had gained acceptance, not only with the Nazis but also with intellectuals. Its appeal was embraced by both left and right, each seeing it through the lens of their own ideology. Even Hitler considered it part of the beginning of great civilisations. While it may be true that Hitler had a framed portrait of Ford, you would not find any reciprocity in Dearborn: Ford disavowed having any connection to Hitler.

Aldous Huxley took this one step further satirising the whole idea when he published in 1932 his novel Brave New World, which envisioned a civilisation patterned after Fordism. In his book, even human embryos and the resulting person would come off an assembly line.

On 19 April, 1886, Ford became engaged to Clara Jane Bryant. They were married on 14 April, 1888. On 6 November, 1893, their son Edsel Bryant Ford was born. Ford was dead set against the US entering World War One and also made comments about border skirmishes with Mexico. As a result, in 1916 the Chicago Tribune called him an anarchist and an ignorant idealist. Ford sued them for libel, but it wouldn't be until July 1919 that a jury in Mt Clemens actually deliberated the case and awarded him a judgement of six cents. Meanwhile Henry had talked his son Edsel into getting a deferment from serving in the war. Collecting evidence of American history became one of his passions. Ford decided to build a museum to give a true picture of the past. In 1929 he opened the museum, originally called the Edison Institute but today known as the Henry Ford Museum and Greenfield Village.

Ford's passion for remembering the past continued into the Thirties. Among historic sites he had restored was Fort McAllister Historic Park in the American state of Georgia. Old age was not a happy time for Henry Ford. He fought the unionisation of his workers, but it happened anyway. He fought the programmes of Franklin D Roosevelt but could not stop them. During World War II Ford initially fought the participation of the US in the war but changed his mind and contributed greatly to the war effort; during WWII his company made more than 8,000 four-motored Liberator bombers, as well as tanks, tank destroyers, jeeps and amphibious jeeps, transport gliders, trucks, engines and much other equipment. Ford saw the death of his son Edsel on 26 May, 1943, at the age of 49. There were a few happy moments. In July 1943 there was an elaborate party for his 80th birthday. Ford lived to see the war end and then retired, watching his grandson Henry Ford II take over the company after the war.

In April of 1947 there was a severe storm in Dearborn. With the power out and the roads blocked, there was no way for a doctor to reach him when Ford had a cerebral haemorrhage on that stormy evening. Henry Ford died that night, 7 April, 1947, at his estate (Fair Lane) in Dearborn, Michigan.

Portrait of Henry Ford supplied by the Library of Congress
1Winfield H Hubbell.2The organization (ALUM) granted membership and licensed vehicles only by unanimous decision of its Board which included Frederick Smith from Oldsmobile. In 1909 a judge ruled the patent valid. In January 1911 an appeals court ruled that Ford was not in violation of this patent since the motor it used was from a type of engine that preceded Seldon's version. 3In fact, the 'any colour so long as it is black' policy only began being applied in 1915. The earliest Model Ts came in grey, green, blue and red.4Dictionary.com states that in a Fascist state, the ruling power is glorified, there is a total subordination of the individual and it must have an authoritarian leader.5Webster's Dictionary defines anti-Semitism as 'hostility toward or discrimination against Jews as a religious, ethnic, or racial group'.