Michigan, USA Content from the guide to life, the universe and everything 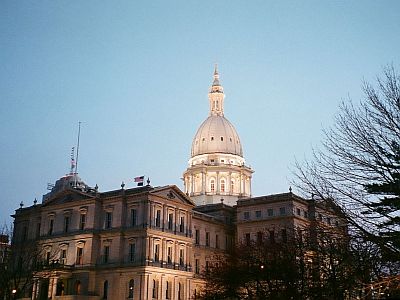 Michigan: a Great Lakes region state in the USA.

Michigan is known as the 'Wolverine State' and 'Great Lakes State'. The State motto is Si quaeris peninsulam amoenam circumspice, which translates as If you are looking for a beautiful peninsula, look around you. A poll conducted in 2011 showed a majority of residents call themselves Michiganders while official sites try to be more sophisticated and call them Michiganians.

There are two peninsulas in Michigan, each of which is hundreds of miles long. These are defined by Lakes Michigan, Huron, and Superior. The two peninsulas are joined by the Mackinac Bridge. The State shares borders with Wisconsin in the northwest and Indiana and Ohio to the south.

Michigan also is a border state and connects to Canada at three points: Detroit, Port Huron and Sault Ste Marie. There are bridges in all three of these cities. Also Detroit, which is north of Windsor, Ontario, has a tunnel under the Detroit River connecting it to Canada.

Before Michigan could become a state, the boundaries had to be set. A dispute over the southern boundary resulted in a fight between Ohio and Michigan, which became known as the Toledo War. This almost became a real war. Things had been smouldering since 1787 and land surveys were held in 1817, one of which allowed Michigan temporary possession. Had this survey been accepted, Michigan would have included the city of Toledo. By 1835 both states claimed it and even appropriated money for armies to hold the property. When Michigan's Territorial Governor actually took 250 volunteers to occupy the land and kick the government of Ohio off the land, these armies came close to clashing. There were no fatalities4, but there was a scandal about the disappearance of a pig, whose fate is still unknown. Finally President Andrew Jackson personally intervened and got Michigan to accept a deal where the US Congress would grant them statehood, and add the Upper Peninsula to their land if they agreed to cede the Toledo strip to Ohio. So Toledo became a part of Ohio and Michigan got a second peninsula.

Michigan has four seasons. Winters usually last from mid-November to March. Spring is usually April and May. Summer is June to Mid-September. Autumn is mid-September to mid-November. We gripe about the extremes5 sometimes but they are usually short-lived.

Michigan is well known for growing many crops. Among these are sugar beet, potatoes, sweet cherries and apples. The USDA has counted the apple trees. They say there are 8,560,000 apple trees in the state with over 21 varieties from Courtlands to Ida Reds, Winesap, Mcintosh, and Northern Spy.

Among the 50 states, Michigan was the only state in the US to lose population during the first decade of this millennium. This means that the population in the year 2000 which was 9,938,444 decreased 0.6 percent, giving a new figure in April 2010 of 9,883,640 people. Due to this decline Michigan loses one seat in the US House of Representatives.

The main reason for this decline is jobs. The various treaties of the US and other financial pressures have caused employers to move their manufacturing elsewhere. In 2011 Michigan's Governor, Rick Snyder, instituted a dashboard on the state website to track this and other problems. As employers cut their workforce, the State of Michigan attempted to provide a safety net with Unemployment Compensation cheques. These however are for a limited number of weeks and a newspaper article in December 2010 stated that there were 166,000 people in Michigan no longer eligible for these payments. It is expected that many of these will move to other states in search of employment. Many recent college graduates are also accepting job offers elsewhere and moving out of Michigan.

Most industry in Michigan takes place south of a line from Grand Rapids to Midland. Michigan is noted for its automobile industry. It also had been noted for furniture, cereal, and plastics.

Michigan is also a great tourism centre. With picturesque lake shores, museums, State and National parks, and an assortment of other things to see and do, Michigan is a good place to visit. One warning to hitchhikers – if you get within five miles of a prison, like those at Milan or Ionia, expect that you will not be given any rides.

This is just a small list – there are many places not included.

An Assortment of Notable People

Many notable people have been born in Michigan:

Then there are those who made a name in Michigan after being born elsewhere:

1 2010 Census. It is 8th in rank with just over 3% of the US Population.2 Whose Latin name, Pinus, cannot be put on a Michigan license plate- thanks to some dirty minded censor.3 A type of fossilized colony coral (Hexagonaria Percarinata) native to the Lake Michigan shoreline.4No shots were fired.5On 23 January, 2011 one mass of arctic air had most of Michigan below 0°F (−18°C). A climate web page said:

The coldest temperature ever recorded in the state is −51°F (−46°C), registered at Vanderbilt on 9 February, 1934; the all-time high of 112°F (44°C) was recorded at Mio on 13 July, 1936. Both sites are located in the interior of the lower peninsula, away from the moderating influence of the Great Lakes.

6 His career is included in Great Comedy Acts.