Grand Rapids, Michigan, USA Content from the guide to life, the universe and everything 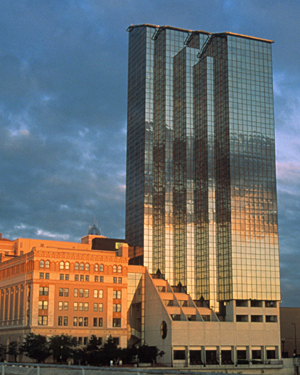 Named after the rapids that used to run through it, the urban setting of Grand Rapids, Michigan, now showcases a peaceful river. The river played a rather important role in the early settlement and development of the city. The river provided a reliable way to get around and to move timber before they had rail traffic, lorries or planes.

Grand Rapids is the second most populous city in Michigan, with a population just under 200,000 people1, down slightly from the 2000 census.

Grand Rapids was also home to Gerald Rudolph Ford, Jr, the 38th President of the United States of America. He obtained that office when President Richard Milhous Nixon resigned in 1974 and wrapped up a lot of loose ends left by his predecessor, ending the Vietnam War2 and granting a pardon to President Nixon, thus ending a turbulent time in American politics.

Grand Rapids used to pride itself on having big city conveniences and a certain small town friendliness. Then along came:

- and it became less friendly and more competitive.

Firstly, one should make sure this is the right place. This is not:

It is considerably larger than any of those.

Grand Rapids lies towards the west coast of Michigan's Lower Peninsula (latitude 42 °58' N, longitude 85 °40' W), at least a half an hour drive from one of the actual lake-shore cities, like Holland or Grand Haven. What is the significance of that? When you're on a peninsula, you tend to define your location by the nearest big body of water. Since Grand Rapids sits closer to the Lower Peninsula's west coast than to its east coast or north coast, Grand Rapids residents consider themselves to reside in West Michigan.

A Bit of History

The first permanent white resident of Grand Rapids was a Baptist minister named Isaac McCoy, who settled there in 1825. A year later, a French trapper named Louis Campau set up a trading post. Of course, the real first residents were the Native Americans, specifically the Hopewell tribe 2,000 years ago, and then the Ottawa, Pottawatomie and Chippewa.

Grand Rapids used to be known as Furniture City because its chief industry was furniture. Makes sense, right? Now with the native forests gone, the furniture industry is in a bit of a decline. Steel Case, an office furniture company, still has Grand Rapids factories, but at the time of writing had begun rather a lot of downsizing.

Grand Rapids was the first US city to add fluoride to its drinking water. This was done back in the 1950s. A small monument downtown even commemorates this event.

Midwinter mornings can make starting a car difficult with temperatures as low as -22°F (-30°C). Residents carry a snow brush in the car and are advised to have a small shovel in the boot. Due to its proximity to Lake Michigan, Grand Rapids has lake effect snows in the winter giving it more snow than cities like Lansing, Jackson or Detroit. A normal snowfall in winter may range from 4 to 24 inches (10-60 cm). Spring rains follow in March and April, although snowstorms have arrived as late as May. At the other extreme, records show rare instances of mid-summer temperatures as high as 100°F (38°C).

While certainly not an attraction, the Amway Grand Plaza Hotel, the city's most expensive, stands as further proof that Grand Rapids is Amway country.

What is there to see in East Town? The Argos Book shop [sic] provides a worthy stop. The bookstore sits on a side street called Robinson, just off Lake Drive and visible from Lake Drive. Argos is Grand Rapid's one-stop shop for geeks. Primarily a used book store, it also sells comics, with good back issue boxes, and carries a decent selection of RPG5 materials, including a reasonably priced secondhand collection.

Most of Grand Rapids' major retail shopping lies in the various suburbs rather than the centre, including such retail destinations as Woodland Mall and Centerpointe Mall, the area's major shopping malls.

The Spectrum Health Butterworth Hospital, founded in 1872 by an Episcopal Rector, quickly became the city's major health provider. Today the hospital forms part of the Spectrum Health System that includes many other facilities, including the Helen Devos Children's Hospital that, at the time of writing, will be moving to a brand new building on 1 January, 2011.

Lately, Grand Rapids has been gripped by the urge to become eco-friendly. No city in Michigan is as committed to Green Power as Grand Rapids. The city's mayor has even said he would pursue ways to end its dependence on coal and other fossil fuels. This in addition to more bike and pedestrian friendly transportation and more LEED6 Certified buildings assist their increasingly credible claim to being the greenest city in America.

1188,040 - US Census, April 2010.2In December, 1974, North Vietnam began assimilating South Vietnam. President Ford responded diplomatically and without military force. This show of restraint effectively put an end to the war.3Amway was one of the great originators of multilevel marketing. Amway brought its founders, Jay Van Andel and Rich DeVos, a lot of money. As a result, lot of stuff around the Grand Rapids area bears their name.4Although when the big rock bands come through, they usually perform at the Van Andel Arena or at Fifth-Third Stadium.5Role playing games.6An internationally recognised system for the design and building of eco-friendly structures.