Lansing, Michigan, USA Content from the guide to life, the universe and everything 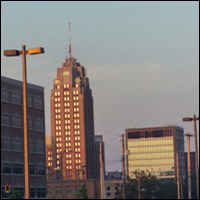 Lansing, Michigan - not to be confused with Laingsburg - is a city in the Great Lakes region of the USA1. It holds the dubious distinction of being the only state capital in the US which is not a county seat. It has roughly 120,000 residents2 and touts itself as a 'world class city' but has little to defend such a title.

In the 1830s, when Michigan was becoming a state, the politicians could not agree on which city to make the state capital so they compromised on a centrally located settlement. They also started a state agricultural college nearby. Later Ransom E Olds began making cars there, and in the 20th Century, Lansing was known for its auto-making. It was also the childhood home of Malcolm X.

The temperature ranges from an average low temperature of 14°F (-10°C) in January to an average high in July of 83°F (28°C). The usual maxim is if you don't like the weather here wait around a few minutes and it will change. Snowflakes may fly as early as September but nobody expects any real accumulations before December. Spring arrives in March and by May the trees have leaves again. While an average summer day is in the 80s, some days may reach 100. Yet even in the middle of summer, sunrise may see temperatures near 40°F (4°C).

Mid November kicks off the holiday season in Lansing. As the days grow shorter and the nights longer the deciduous trees drop their leaves while houses and evergreens are decked with multicoloured lights. The Friday before Thanksgiving is officially dubbed 'Silver Bells in the City'. During this event an 'electric light parade' bears Santa to the Capitol for the official lighting of the State Christmas Tree. It is the season for Thanksgiving Turkey, Watching bowl games on TV, a time for Christmas shopping and Santa at the Mall. Then for watching all those presents beneath the Christmas tree be opened and finally a time for staying up until midnight to wish a certain someone Happy New Year then getting up late on New Years Day to start the whole cycle again.

Coming into Lansing at Capital Region International Airport, you might like to do a little shopping. The closest mall is south-west: the Lansing Mall at 5700 W Saginaw, near Interstate 96. Follow Saginaw East into the centre of Lansing and off to the right you will see three matched smokestacks. Someone whimsically named them Winkin', Blinkin' and Nod. They sit next to the Grand River. Meanwhile, just a few blocks to the northeast, a new landmark has arisen just north of the railroad tracks on Washington Avenue. Built at a cost of $182 million3, the new natural gas power plant owned by the city Board of Water and Light has replaced the antiquated coal-fired plant on the river. The three smoke stacks which are a city landmark will never again spew pollution into the skies above Lansing.

At the centre of town is the State Capitol Rotunda whose dome shares a building with the State House of Representatives and the State Senate. A local activist, Andrew Anthos, once wanted to see this dome lit in pastel shades of red, white and blue. He spent months standing outside gathering thousands of signatures, only to fail in the end. To this day the colour of the dome is off-white.

Nearby is the tallest building in town, which, until a few years ago, was known as the Michigan National Building; today it is known as the Boji Tower. Farther east is a smokestack (bearing a giant lug-nut) which stands near The Cooley Law School Stadium and is in honour of the local minor league baseball team; the Lansing Lugnuts. This stadium is located six blocks East of the Capitol Rotunda on the corner of Cedar Street and Michigan avenue.

Near here on Museum Drive stands the Impression Five Science Museum. After visiting the museum you might like to take a walk on the Riverwalk. This award winning footpath stretches for miles, in either direction, along the Grand River.

A few blocks north-east of here stands Old Town which is currently home to many interesting shops. South-east along the river you will find the Potter Park Zoo, which is just East of S Pennsylvania Avenue.

In downtown Lansing, seven blocks west of the Capitol, is the State Historical Center. This is Michigan's number one historical museum and also houses the State Archive and State Library. One block from there, the State Supreme Court meets in a large domed building called the Justice Center. Also near there the State Department of Environmental Quality has a new structure. This is called Constitution Hall because during the 1950s the State Constitution was written in an older building on this site.

A few blocks south is a landmark of a different kind. Here one will find the General Motors Corporation Grand River Plant where they make cars. This stands next to another building which was the headquarters of Oldsmobile until the nameplate was retired and the building scheduled for demolition. General Motors still employs thousands of skilled labourers. Many of those workers commute to the Delta Township Plant which lies a few miles SW of the city.

Further south you will see a shopping centre named after Civil War hero General John Logan. At one time the boulevard was also named after him before the 'powers that be' at City Hall decided to change it to honour Martin Luther King Jr. Efforts to honour Caesar Chavez in like manner have so far been unsuccessful. A few blocks south of Logan Square stands a small marker marking the childhood home of Malcolm X.

After a hard day's work making cars, a local resident may stop off at one of the fast food restaurants for dinner. There are also a few bars and three bowling alleys, but the main place people hang out is at home watching television.

Streams of cars head toward their destination every day in this city. The Public Service Department of the City Of Lansing faces an uphill battle with potholes. It also installs traffic calming devices such as round-abouts and speed bumps. The major highways in Lansing are run by the Michigan Department of Transportation. While the dominant form of transportation is the car, there are people using bicycles, walking, and riding city buses. The Capital Area Transportation Authority gave roughly ten million rides in 2007, and has won an award for the best public transit system of any North American city its size4.

Including private and charter schools Lansing has over 22,000 students in secondary education. A recent racial breakdown is as follows:

Every May, Lansing holds a diversity festival to honour the wide range of people who call Lansing home. In addition to the public schools there are also private schools and two colleges: Lansing Community College and Davenport University. The city also has students commuting to East Lansing to attend Michigan State University.

The dominant forces are General Motors, the State Government, and Michigan State University. Health Care Providers like the two main Hospital Systems: Sparrow and Ingham Medical also employ many residents. Various minor companies are also located here. Local politicians are encouraging more Internet companies to locate in the region. And in 2007, Lansing had a lower unemployment rate than most of Michigan.

In 1992 there were 42 overflow pipes in the Lansing Sewer system. When excess rain and snow overloaded the system these began depositing raw sewerage in the river. The US Environmental Protection Agency mandated that Lansing have a plan to handle this problem. The resulting 30 year plan, known as the CSO5 Project, has cost the city over $100 million and has caused countless people to find a new route as streets were dug up to replace old pipes with new ones. These new pipes separate the rain water from the sewer system so the sewers could never again have an overflow problem.

Learn how, in the face of massive pollution, the Great Lakes appear to be cleaning themselves.

1Latitude 42° 43' 57" N Longitude 84° 33' 42" W, altitude 856 ft (262 metres).2114,297 - US Census, April 2010.3As mentioned in the 26 June, 2013 issue of the Lansing City Pulse.4The American Public Transportation Association (APTA) honours one public transportation system in North America each year who has demonstrated outstanding achievement in efficiency and effectiveness. CATA was ranked first for 2007 in the 4 - 30 million ride category which includes 106 systems.5Combined Sewer Overflow.