Joe Magarac: Folklore Hero or Fakelore Satire? Content from the guide to life, the universe and everything 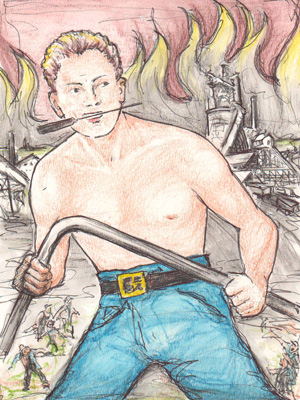 He was tall, strong, and miraculous. He could bend steel with his bare hands. Extrude railroad girders from between his clenched fingers. He worked 24 hours a day, with only short breaks. He supported truth, justice, and the American Way the growth of capitalist America – by producing more steel, faster, harder, cheaper, than anyone else. Finally, in an act of self-sacrifice, this messiah of the Industrial Age melted himself down to build a new steel mill.

He was Joe Magarac, the steelman from Hunkietown, the Pittsburgh legend. Or was he a chance invention, born of a greedy steel industry, a gullible writer, and a fed-up group of steelworkers?

What is 'fakelore'? According to Richard M Dorson, the folklorist who coined the term in 19501, fakelore is 'a synthetic product claiming to be authentic oral tradition but actually tailored for mass edification2.' Dorson was angry at what he called 'parlor folklorists' who 'did no fieldwork, adapted printed sources that were themselves suspect, invented out of whole cloth', and 'emphasized the jolly, cute, and quaint...' We get the idea. Dorson objected to the tailoring of stories, songs, and motifs out of cultural traditions to meet the agendas of modern interests such as businesses, ad agencies, film companies, or tourist bureaus. If you're feeling generous, you follow German Professor Hermann Bausinger and label it Folklorismus, but any way you aim your camera, the picture isn't pretty: some modern person has been messing with sacred material.

In 19th- and 20th-Century North America, possibly spurious 'folktales' abounded, encouraged by business interests and newspapermen. Many tales of 'folk heroes' were spread, such as Paul Bunyan – originally a character in logger geeklore, sanitised for popular consumption and often turned into a roadside attraction   – and Pecos Bill, invented by writer Edward O'Reilly in the early 20th Century. Educators love these stories because they are fun and engaging ways to get children to take an interest in history. Lesson plans abound on the Internet. Professor Dorson would probably be gnashing his teeth.

Not only are fakelore stories fun for kids and a boon to busy teachers, but they're good for the tourist industry, as well. Local boosters delight in drawing attention to the famous folk heroes associated with a locality. This is very true in Pittsburgh, Pennsylvania. Thirty 'historical' murals in the downtown area, as well as a 15-foot statue in Kennywood Amusement Park, commemorate the subject of this Entry – the true Man of Steel, the Monongahela Valley demigod, Joe Magarac.

Look up Joe Magarac on the web, and the first image you are likely to see will probably remind you, perhaps unpleasantly, of Soviet Realism or WPA3 post office murals. It's found, ironically, in Pittsburgh's Carnegie Library.

Why 'ironically'? Because the Pittsburgh library, 'free to the people since 1895', was the flagship library of philanthropist/steel tycoon Andrew Carnegie, founder of US Steel. Carnegie, more than any other person in history other than writer Owen Francis (of whom more later), was responsible for the existence of Joe Magarac. Carnegie and other steel barons made the Monongahela Valley a steel powerhouse by the late 19th Century, which also made the area a mecca for Eastern European steelworkers. Towns grew up near the steel mills, filled with immigrants from Hungary, Serbia, Croatia, Poland, Russia and Czechoslovakia.

People were more racist then – or at least, more open about it. Eastern Europeans were not high on the list of desirable immigrants in those days. These steel workers lived in overcrowded conditions, working 12-hour shifts at 15 cents per hour, less than a reasonable living wage. Steel-mill owners got rich: by 1911, Pittsburgh firms were producing between one-half and one-third of the steel in the US. Woe betide the workers who thought to share in this prosperity: the 1892 strike by unionised workers in Homestead, Pennsylvania, resulted in lockout, a violent battle between strikers and 300 armed Pinkerton agents, and the calling out of the state militia. The message? You can't fight management.

'Hunkie' steelworkers could be expected to face their lot with resignation and dogged determination to make a life for their families. Probably only an incurable optimist, or a fan of fakelore, would expect them to celebrate their lot with cheerful folktales.

The story of Joe Magarac starts in 1931. That is when Owen Francis, a writer for Scribner's magazine, sat down to talk to some Croatian steelworkers. The steelworkers told him a yarn that went something like this:

Joe Magarac was born in the heart of the Allegheny Mountains. He was made of steel. That was why he could handle molten metal, bend it into pretzels. He didn't need to sleep. He worked 24 hours a day. Working with steel was what made him happy.

Once, Joe won a contest against other steelworkers. The prize was the hand of Mary, the gang boss's daughter. Joe knew, though, that Mary was really in love with another worker, so he bowed out. Besides, he didn't ever want to leave the steel mill.

When the mill owner closed the mill for a long weekend, because Joe was working so hard they were ahead of schedule, Joe became so depressed that he melted himself down in the Bessemer furnace. From his body, they made a whole steel mill – the finest in the world.

Francis must have loved this material the steelworkers gave him. He had only one question:

'What does 'Magarac' mean?'

'It's very complimentary,' they assured him. 'It's what we call somebody who only works, sleeps, and eats.'

This is a picture of a magarac. Did Francis really not realise that these men were being satirical?

Apparently, Croatian steel workers used the term 'magarac' to note, and mock, their condition as exploited workers. The claim that Joe worked 24 hours a day was almost literally true – they worked 6-7 days a week, and every couple of weeks, their 12-hour shifts would go back-to-back, and they'd work around the clock. This was at a steel furnace. No wonder they compared themselves to beasts of burden.

Whether the Croatian workers were being satirical or not, the story of Joe Magarac caught on with management and Pittsburgh boosters. In 1951, US Steel produced a comic. Murals and statues were erected. In school textbooks, the story was added to the 'canon' of alleged US folk heroes, along with Paul Bunyan the logger, Mike Fink the flatboat man, and Pecos Bill the cowboy. It all served the self-image of masculine rugged individualism.

Is Joe Magarac fakelore? Almost undoubtedly. In 1953, folklorist Hyman Richman interviewed Eastern European steelworkers in the Pittsburgh area, and discovered that none of them had heard of Joe. There is a conspicuous lack of oral tradition. In 2008, Stephanie Misko, writing for the Pennsylvania Center for the Book, commented that none of her Slovakian steelworker relatives, who had been active in the industry in the 1930s, had ever heard these stories.

It would appear that a satirical story, made up by frustrated, tired workers with a sense of humour, has become a legend, largely because the image of the strong, tireless, and above all, uncomplaining worker suited industry and civic leaders down to the ground. George Orwell commented many years ago that for workers whose labour was denigrated, often the only source of pride left was in their capacity to endure. Surely the comparison of a strong working man to a donkey indicates both a sense of dehumanisation and a stubborn desire to prevail.

A case in point about pride: this Croatia-based site is pleased to claim Joe as an example of Croatian wit and humour. The page's author is quick to deny any rival Hungarian claims to Joe, and provides us with a helpful picture of a magarac, a Dalmatian donkey.

Come to think of it, Joe might have approved. He's a tough-looking fellow, that donkey.

This article from the Eugene O'Neill Newsletter, entitled, 'Men of Iron, Beasts of Clay', compares the Joe Magarac story to O'Neill's The Hairy Ape. It is worth a read.

1Prof Dorson coined this term in a debate with James Stephens, author of a work on Paul Bunyan which Dorson regarded as spurious. Dorson also coined the term 'urban legend'.2These remarks appeared in the article 'Folklore and Fakelore', in The American Mercury, vol 70, March 1950.3WPA stands for 'Works Projects Administration', a US initiative to provide employment during the Great Depression. This New Deal project was famous for including artists and academics as well as blue-collar workers, and controversial for alleged left-wing bias. The WPA was responsible for a lot of murals and bas-reliefs featuring rather muscular workers.