'The Colour of Magic' - the Television Series Content from the guide to life, the universe and everything 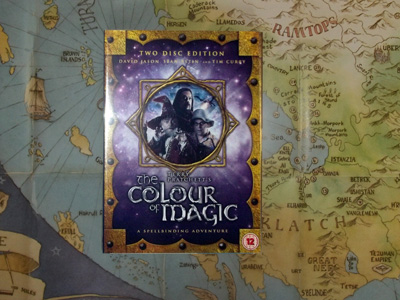 The Discworld series is set on the Disc, a flat and circular world carried by four gigantic elephants that stand on the back of an enormous turtle known as the Great A'Tuin. The Disc is populated with humans and an assortment of various mythical creatures, as magic exists in abundance there. The largest city is called Ankh-Morpork and is home to thugs, criminals and a school of wizardry.

Twoflower, the Disc's first tourist, meets inept wizard Rincewind in the infamous pub, the Broken Drum. After reluctantly agreeing to be Twoflower's guide, aided by the promise of gold from Twoflower and the threat of violence from the Patrician if he doesn't, Rincewind and Twoflower embark on a series of adventures exploring the Disc to its very edge, and beyond.

Meanwhile back in Unseen University, the school in Ankh-Morpork dedicated to magic, an ambitious wizard named Trymon seeks advancement by eliminating all wizards who outrank him. In his quest for power he uncovers the knowledge that one of the eight great spells contained within the most magical book on the Disc, the Octavo, is not only missing but hidden inside Rincewind's mind. Yet Trymon is not the only one seeking knowledge as on the Disc's edge the Astronomers and Astrozoologists seek the answer to the ultimate question of life, the universe and everything; what is the turtle's sex?

Soon strange, red stars appear in the sky, trolls awake from their slumber, heroines are the villains and the first episode does not so much end on a cliffhanger, as with the two travellers actually plummeting off the edge of the world into the harsh vacuum of space.

The casting of Sir David Jason, an actor in his late sixties, as Rincewind did meet with some confusion from fans, as Rincewind was described as being in his thirties. Jason had also recently played Albert in Hogfather. However as one of Britain's most popular television stars1, his casting provided the adaptation with gravitas. Jason had previously mentioned in an interview in the 1990s that the character of Rincewind was one he hoped he would one day be able to play, and a decade or two later was delighted to be given the role.

After the death of Ian Richardson who had played Death in Hogfather so well, Christopher Lee was the perfect choice to replace him, bridging the Sky One and Cosgrove Hall Discworld adaptations. When Terry Pratchett heard that Isle of Wight born Oscar-winning actor Jeremy Irons would be cameoing in the small role of the Patrician, he was so pleased that he wrote extra lines for his character to say.

Popular recurring Discworld places that appear in The Colour of Magic include:

Two of the locations used in Hogfather, London Guildhall as Unseen University and the house that stood in for Death's Domain, were returned to for The Colour of Magic.

Working with Terry is like having the best Hollywood script doctor on tap... It was among Terry's many great suggestions... that we should also take 'The Light Fantastic' and complete the Rincewind/Twoflower story… So while Episode 1 is broadly 'The Colour of Magic', Episode 2 is mainly 'The Light Fantastic
- Vadim Jean, Writer/Director

As the very first Discworld novel, the book The Colour of Magic was quite different from the novels that follow. For instance, it isn't actually a novel at all but four consecutive short stories2. One major difference is that the character of Death isn't quite who he later developed into. This was something Terry Pratchett was keen to change for the television adaptation and he wrote Death's speeches in The Colour of Magic series to be closer to the sort of things he had said in the Hogfather book.

Even a three-hour movie means that there are good lines and cherished scenes that never even made it as far as the cutting-room floor, but surely the art is to prune or cut away all those pieces that don't fit or aren't needed any more and still leave the soul intact.
- Terry Pratchett

As the story compressed two novels into a three-hour run time, quite a few elements inevitably had to be excised. For a start, one of the original four stories, 'The Sending of Eight', was deleted as there would not be time to include both that and 'The Lure of the Wyrm'. This was done with a friendly nod to the audience, as Twoflower approaches a junction signposted to the Temple of Bel-Shamharoth in the opposite direction to the Wyrmberg, and though Twoflower often says that he wants to go and visit, he never quite manages to. Sean Astin had previously played Samwise Gamgee and encountered Shelob the spider in the The Lord of the Rings trilogy. Shelob was not dissimilar to Bel-Shamharoth but the Terry Pratchett adaptation could not possibly have matched the effects budget of The Lord of the Rings. Some fairly important characters in the novel, such as Hrun the Barbarian, do not appear. Many places that the characters do actually visit are only seen briefly, and not in as much detail as they are portrayed in the book.

For The Light Fantastic section, the audience does not get quite the same sense of dread and doom related to the approaching star as in the novel. However the character of Trymon, having appeared in both episodes, is a stronger character than his literary equivalent, using the traditions of 'dead men's pointy shoes' to promote himself to the top of Unseen University's career ladder. Overall the audience still gets a feel of the flavour of the novels.

Filming The Colour of Magic took ten weeks, and predominantly took place in the areas surrounding Pinewood Studio. The water tank there, the largest in Europe, doubled for the water at the edge of the world, which was combined with shots of Niagara Falls to give the impression of the rimfall. One of the other principal locations was Gloucester Docks, with the replica Matthew3 used as the ship that brings Twoflower to and from Ankh-Morpork.

Although the effect of the luggage, a box on legs that follows Twoflower wherever he goes, did involve some CGI work, three actual luggage props were made. One was a disguised motorised wheelchair and was used when someone rode on the luggage. An ornately decorated solid luggage was used when anything was placed in or removed from it, and the third was a light plywood prop which actor Richard da Costa wore in order to give the luggage animal-like movement. Richard da Costa also played the ape Librarian and studied orang-utan movement at London Zoo in order to play the part correctly.

Overall the adaptation is very pleasurable and treats the viewer to a greater sense of scale across the Disc than the comparatively more compact adventure of Hogfather.

1He was voted 'TV's Greatest Star' in a poll of British television talent in 2006.2'The Colour of Magic', 'The Sending of Eight', 'The Lure of the Wyrm' and 'Close to the Edge'.3A replica of the Bristol ship that sailed to Newfoundland in 1497 that was recreated in 1997 to celebrate the 500th Anniversary.