'Soul Music' - the Television Series Content from the guide to life, the universe and everything 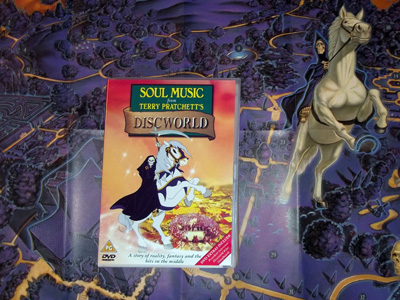 Soul Music is the first full-length Discworld adaptation, and an accomplished achievement by renowned animation studio Cosgrove Hall. Made in 1997 for Channel 4 following a short pilot episode based on Reaper Man, it is a fairly close interpretation of Terry Pratchett's 16th Discworld novel.

Death is devastated when his daughter, Ysabell, and her husband Mort are killed in a road accident. Desperate to forget, he abandons his Duty and disappears. Knowing from experience the consequences if no-one restores the balance between life and death, Death's servant Albert, aided by the Death of Rats and Quoth the Raven, persuades Susan, the daughter of Ysabell and Mort, to fill the vacancy until he is found.

Yet a young musician named Imp y Celyn, whose name means 'bud of the holly' and is nicknamed 'Buddy', does not die when he was supposed to. He and his bandmates, a troll drummer who calls himself 'Cliff' and a hornblower called Glod, become the most famous musicians the Disc has ever known. Called 'The Band with Rocks In', they are managed by disreputable businessman CMOT1 Dibbler. It becomes increasingly apparent that Buddy has become possessed by the music, which wants his soul in return for fame.

Will Susan, aided by the wizards of Unseen University, be able to rescue Buddy from the music and the Musician's Guild? Can she find Death and finally accept that he is her grandfather?

Popular recurring Discworld characters that appear in Soul Music include:

I like to find people who are really competent at what they do and let them do it without looking over their shoulders too much. We have had meetings about characters sounded and how they look... That's worked extremely well, but ultimately I found that if I let [Cosgrove Hall] get on with it, they delight and surprise me.
- Terry Pratchett

Cosgrove Hall keep the genius of Terry Pratchett alive in this adaptation of his look at rock and roll music. Strongly influenced by the Beatles, Buddy Holly and Meatloaf, as well as films such as Back to the Future, Blues Brothers and even Terminator II: Judgement Day, one of the joys of watching this series is looking for all the influences of the real world. So for instance, the club owned by fearsome troll Chrysoprase is called the Cavern, the same name as the club in Liverpool where the Beatles performed. In a scene created for this adaptation but worthy of Terry Pratchett himself, in Quirm, a town famous for its cheese, Buddy says 'we're more popular than cheeses', a pastiche of the infamous 'more popular than Jesus' Beatles backlash.

The language is pure Pratchett – with people asking Buddy if he is Elvish2 and Glod stating 'I can't see anyone lasting long in this business with a name like 'Cliff'!'3. The scenes in which Death enrols in the Klatchian Foreign Legion are enjoyable parodies of Beau Geste, complete with Death being renamed 'Beau Nidle'. The established character of the Dean transmorphs into a parody of James Dean, only he mistranslates the phrase 'Live Fast, Die Young' as 'Live Fats Die Yo Gnu'.

As Soul Music is a traditional animated series made in the 1990s it is perhaps expected that some elements of the animation would appear dated and old-fashioned compared to the latest Pixar and Disney releases, yet the animation stands up remarkably well. Several sequences are very effectively done, especially the opening sequence, complete with a recap in which scenes from previous episodes appear in the top of an hour glass, before falling down to the bottom. The series combines traditional and computer generated animation to a remarkable extent, both styles working in harmony to tell the story.

When Soul Music was adapted for television, some sequences, especially those featuring minor characters, were edited out in order to keep the flow going. Sadly the Blues Brothers inspired 'On a mission for Glod' sequence regarding borrowing a pianoforte is one that is deleted, as are most of the scenes featuring wannabe musicians the Socks Pastels. There are a few minor changes, so that the school that Susan attends is located in Ankh-Morpork rather than Quirm, which does not greatly affect the story. Inevitably, many of Pratchett's background details and footnotes also cannot be translated onto the screen. Yet the adaptation surprises and delights; only in Cosgrove Hall's Discworld adaptations do dwarfs sound Liverpudlian. George Harris is perfect as the troll Cliff, and they even managed to get as established an actor as Neil Morrissey from TV series Men Behaving Badly to play the minor role of Mort.

Soul Music consists of seven 30-minute episodes. The series was adapted by Martin Jameson, directed and produced by Jean Flynn. It was also one of the first times that Discworld characters had been seen in a different style to that portrayed by Josh Kirby4.

I nearly burst into tears when I heard the 'Soul Music' soundtrack, I played it again and again... It's a work of genius. I don't know how but they managed... to encapsulate a history of rock music and there's lots of little musical gags in there... The music is so good in fact sometimes the words and the actions get in the way.
- Terry Pratchett

Soul Music's soundtrack is an undisputed strength. Every performance given by 'The Band with Rocks In' chronicles an era of music from the 1950s onwards. The music was by Keith Hopwood, most famous for being in Herman's Hermits and who provides Buddy's singing voice, and producer Phil Bush.

1Cut-Me-Own-Throat.2A play on Elvis.3Referencing Cliff Richard, the UK's third most successful musician after Elvis Presley and the Beatles, who has had 14 number one hits, spread across the 1950s, 1960s, 1970s, 1980s and 1990s. His career has continued into the 21st Century, but peaked at number 2 in 2006.4Artist Josh Kirby, famous for his quirky film posters and book covers, designed the covers for the first 26 Discworld novels as well as other merchandise, including the games Terry Pratchett's Discworld, Discworld II - Missing Presumed...!? and Discworld Noir. Since his death Discworld novels have predominantly been illustrated by Paul Kidby.