'Wyrd Sisters' - the Television Series Content from the guide to life, the universe and everything 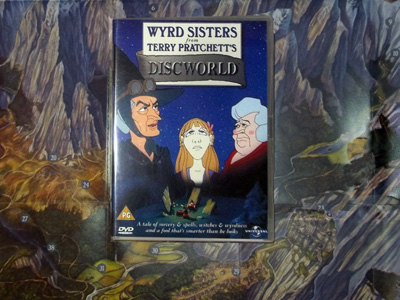 I think 'Wyrd Sisters' has been brilliantly brought to life in this excellent animated version.
- Terry Pratchett

Wyrd Sisters is the second and last Cosgrove Hall animated adaptation of one of Sir Terry Pratchett's Discworld novels, following Soul Music. Made in 1997, it is based on the novel of the same name, which was the sixth Discworld novel, first published in 1988. The adaptation builds on the success of Soul Music to create a more contained story focussing on fewer characters, with a strong Shakespearean theme and lashings of Terry Pratchett humour.

Felmet: I see it's got Death in it.
Fool: Always popular. People expect him...

In the kingdom of Lancre, Duke Felmet, encouraged by his wife, murders his cousin King Verence to inherit the throne. Verence's baby son, the true heir, is rescued from the castle and placed in the care of a coven of three witches, Granny Weatherwax, Nanny Ogg and Magrat Garlick, who each give him a magical gift. Naming him Tomjon, they allow a band of strolling players headed by Olwyn Vitoller the actor and Hwel, a dwarf playwright, to adopt him, ensuring he is safely out of the kingdom.

Yet cruel Duke Felmet loathes the kingdom of Lancre with a passion, especially detesting the trees. Three years into his reign he is becoming increasingly insane and paranoid that the witches are plotting against him. Felmet and his wife wish to turn the people of Lancre against the witches. After seeking his faithful Fool's advice they decide to hire a band of actors to re-enact a play portraying King Verence as a wicked tyrant who ruled unjustly with the aid of black and midnight hags.

The kingdom of Lancre as a whole, not just the people but all the living minds inside it, including those of animals and trees, is upset that the kingdom is ruled by a king who does not care for it. Granny Weatherwax knows that only the true king can end Felmet's reign, and Tomjon is 18 years too young to challenge him. If Lancre waits 18 years for the heir to return then the kingdom will be destroyed.

How will the witches solve this dilemma? What words of power can they use to banish the fearsome demon Wxrthltl-jwlpklz back to the hideous depths from which he came?1 Will the actors learn that the pay, no, they mean the play, is the thing?

It's the poetry of the voices that I really appreciate.
- Terry Pratchett

Popular recurring Discworld characters that appear in Wyrd Sisters include:

The same bandits that threaten The Band With Rocks In from Soul Music also appear.

Things that try to look like things often do look more like things than things, well known fact. But I don't hold with encouraging it.
- Granny Weatherwax

Wyrd Sisters filters the greatest hits from William Shakespeare's plays, especially Macbeth and Hamlet through Terry Pratchett's unique, and brilliant, perspective, turning the story on its head by making the witches the heroes. One of the joys of the story is spotting the Shakespearean references. For instance, when Magrat makes a potion, she picks the same flowers as Ophelia. Shakespeare's Globe Theatre is transformed into The Dysk. There is even a play-within-a-play plot straight out of Hamlet, in which the old King Verence is portrayed exactly like Richard III. Wyrd Sisters is a much more self-contained story than Soul Music. The voice cast is stronger than the earlier adaptation, and as there are fewer characters with more interactions between them all, each character comes across much more strongly and has a clearer role.

Wyrd Sisters was directed by Jean Flynn and scripted by Cosgrove Hall's Jimmy Hibbert. As Hibbert had originally joined the studio as a voice actor before venturing into writing, he also plays King Verence. Inevitably, in order to fit the story into six 25-minute episodes3, much of the story's finer detail is lost. This includes a sense of the passage of time, as the story takes place over three or 21 years (depending on your perspective). Similarly, the whole of the kingdom of Lancre in the Ramtops Mountains has been reduced to consist of a castle, a village, Granny Weatherwax's cottage and an indeterminate number of trees.

Duke Felmet, as the protagonist, also suffers from having his story watered down. His madness in the novel is akin to that that affects Lady Macbeth, especially with his fascination with the state of his hands after the murder. This barely features in the series; his insanity is downplayed and King Verence's revenge by salty porridge barely gets a mention. This is perhaps understandable considering the younger audience targeted by an animation, but with so much Terry Pratchett dialogue to choose from, it seems a shame that so much of what he says is the phrase I hate this kingdom! repeated a tad too often.

The series is probably more aimed at an adult audience than young children. Despite this, many of the most gruesome aspects of the original story are edited out and the infamous Discworld hedgehog song has been reworded to 'A hedgehog can never be bothered at all'.

I would like it if people who saw the animation, if that was the first intro to Discworld, then say 'I wonder if the book is as good as this'. They may well be disappointed, but if they get the book I'll be very pleased.
- Terry Pratchett

1Answer: 'Run along'.2Despite not having a speaking role, he briefly has a cameo appearance in the Lancre crowd scene.3Released on VHS and DVD in a two hour 20 minute omnibus format.