Terry Pratchett's Television Adaptations Content from the guide to life, the universe and everything 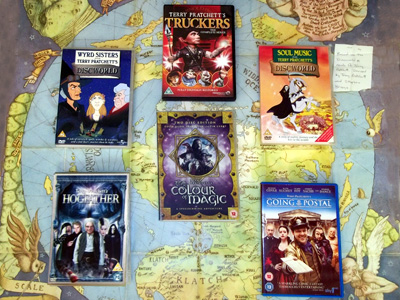 Throughout his life, Sir Terry Pratchett was one of the best-selling authors in Britain and indeed the world. It is perhaps unsurprising that eight of his books have been adapted for television. Three of these adaptations were animations by renowned animation studio Cosgrove Hall, while three more have been adapted by BSkyB1. ITV and the BBC have also both adapted one of the Johnny Maxwell adventures each.

I get on extremely well with Cosgrove Hall, much better than I thought I would... They listened to what I say. It wasn't a case of me just handing over a book and getting some money and just sitting there waiting to see what happened next.
- Terry Pratchett

Cosgrove Hall was the animation studio most famous for such childhood classics as The Wind in the Willows and Danger Mouse, which attracted an audience of 21 million viewers at its peak and led to spin-off Count Duckula, all of which featured the voice of David Jason. Founded in 1969 as Stop Frame Productions by Mark Hall, later joined by Brian Cosgrove, in 1976 Thames Television hired them to become their animation department, making all animations for Thames Television until 1993.

Truckers was made by Cosgrove Hall on behalf of Thames Television and broadcast in early 1992. This was a stop-motion animated television series based on the first novel in Pratchett's Bromeliad trilogy. Thames Television intended to adapt the entire trilogy; however, they lost the franchise rights to broadcast to the London area in January 1993 following a controversial secret sealed-bid renewal process, and so the second and third parts of the trilogy, Diggers and Wings, were never made.

In 1993, following the loss of their ITV broadcast licence, Thames Television sold Cosgrove Hall Films to Anglia TV. As Terry Pratchett was Britain's best–selling author throughout the 1990s it was perhaps inevitable that Cosgrove Hall would wish to pursue their adaptations of his work.

Welcome to the Discworld was a pilot episode made in the hope of getting Channel 4 interested in an animated Discworld series. Only eight minutes long, the pilot is based on Reaper Man. The first three minutes have an opening narration explaining the origins of the Discworld and showing Great A'Tuin the world turtle flying through the cosmos. Following this, a scene takes place in which the Auditors of Reality discuss replacing Death. The remainder of the episode takes place in Death's Domain, with Death informing Albert, Death's butler, that he is being replaced and is going out to spend the rest of his time, before the narrator warns that, without the balance between life and Death kept, zombies will follow and the story is To Be Continued.

Although Reaper Man was not made into a full series, the pilot impressed Channel 4 executives enough to commission two follow-ups from Cosgrove Hall, but with a few changes.

There are a few differences between the pilot and the subsequent Discworld series. Rather than continuing the story of Reaper Man, with potentially unpleasant zombies deemed unsuitable for the family audience, Soul Music was adapted instead. Other than the story chosen, the biggest change was to make Albert much less comically cartoony, with his voice and appearance later made completely different. Death, Binky and Death's Domain were tweaked and the subsequent series does not feature a narrator. The beautiful CGI introduction in Welcome to the Discworld showing Great A'Tuin swimming through space was used as the basis of the opening and closing credits; although the camera moves remain similar to before, the turtle and Disc are rendered in greater detail.

Fortunately Hammer Horror star Christopher Lee, who played Death superbly, would continue in this role. Christopher Lee would be the only actor to play the same character in both the Cosgrove Hall and BSkyB Discworld adaptations.

Soul Music is a faithful adaptation of Terry Pratchett's story, recognised for the outstanding quality of its soundtrack. Christopher Lee dominates the story as the angst-ridden Death coming to terms with his work/life balance, finely supported by the other members of the cast.

Wyrd Sisters is another story that adapted well to television. A more self-contained story than Soul Music, it has fewer characters and those that appear have more interactions than in the loosely connected thread of Soul Music. This allows the titular witches to shine through and they are presented as strong characters that the audience can get to know, although regrettably Death plays a lesser role in this story.

Mob have set up a wonderful team. They work very hard at getting the clothing right, they work out through the books how things should go... It's great, it's like someone going into your head and just filming the contents, it really is fantastic... They got really what I wanted.
- Terry Pratchett

Shortly after Vadim Jean read the Discworld novels, beginning with The Colour of Magic and Hogfather, he envisioned creating a television adaptation. Working as a Mob Film Company production for British satellite television channel Sky 1, he oversaw three two-part Discworld adaptations. Jean wrote and directed the first two, Hogfather and The Colour of Magic, and was the executive producer on the third, Going Postal.

One particularly nice touch with the BSkyB adaptations is that their cast included actors and voice artists well known to Discworld fans. For instance, Tony Robinson appears in Hogfather and Nigel Planer appears in both Hogfather and The Colour of Magic. Both actors are well known for their audiobook adaptations of Pratchett's books, and both have provided voices for the Discworld computer game series. Tony Robinson2 was in Terry Pratchett's Discworld while Planer was in Discworld II - Missing Presumed...!? and Discworld Noir.

A two-part mini-series broadcast over Christmas 2006, Hogfather enjoyed a flawless cast and a script that stayed very close to the original novel. As the script was overseen, or 'mucked about with' as the credits put it, by Terry Pratchett, the dialogue shone. A glossy, quality production that convinced fans that all their Hogswatches had come at once.

Building on Hogfather's success, The Colour of Magic is a more ambitious adaptation that combines the first two Discworld novels, both The Colour of Magic and The Light Fantastic, into a two-part adaptation. Despite the numerous challenges, trims and cuts required to shorten the two stories to make them fit into the available time, the heart and soul of the story remains.

A more recent stage adaptation by Stephen Briggs that also combines The Colour of Magic and The Light Fantastic has been named 'The Rince Cycle'.

The first Terry Pratchett adaptation in HD (High Definition) is to date the last one to have been made. Unlike the previous two it was not written and directed by Vadim Jean, nor does it star Death or David Jason, but it is still a strong, close adaptation of one of Terry Pratchett's later Discworld novels with a talented cast.

Following Going Postal, a fourth adaptation to be made by BSkyB was proposed: an adaptation of Terry Pratchett's 37th Discworld novel, Unseen Academicals, which had been published in 2009. This was initially due to be broadcast in 2012, but in 2011 it was announced that filming was delayed, later presumably cancelled. It appears that this had been caused by Pratchett withholding the rights in order to pursue making his own Discworld adaptations.

It's very tempting to say 'Wouldn't it be a good idea to script an entirely new Discworld series', and then I think a man ought to know his limitations. I think I'm pretty good at what I do... why should I go off and be a mediocre scriptwriter – adapting books is a very precise art and I don't think I ought to think that just because I can write the book okay I can do the adaptation well as well.
- Terry Pratchett

In 2011 it was announced that Terry Pratchett had formed his own television company and would work closely with Prime Focus Productions. Prime Focus had also bought the rights to adapt Good Omens, his novel co-written with Neil Gaiman. There was a blaze of publicity promising that Pratchett would be overseeing a television series based on his Ankh-Morpork City Watch stories, to be called The Watch3. It was anticipated this project may even have included scripts written by Terry Jones. Sadly little happened with this project since 2011 as secure financial backing was required.

Christopher Lee as the voice of Death is absolutely superb – I don't think he could be any better.
- Terry Pratchett

Johnny Maxwell is a young boy who appears in three children's books by Terry Pratchett:

Two of these stories have been adapted for television. The first was Johnny and the Dead, made by London Weekend Television for ITV in 1995. Four 30-minute episodes were made. Andrew Falvey played Johnny and Brian Blessed also appeared.

Over a decade later in 2006, Johnny and the Bomb was adapted for the BBC. Now starring George MacKay as Johnny, it also featured Zoë Wanamaker as Mrs Tachyon and Frank Finlay as Tom, Johnny's granddad. Three excellent 40-minute episodes were made. Neither of the Johnny Maxwell adaptations are currently available on DVD or Blu-Ray.

During the making of The Colour of Magic, Terry Pratchett was asked how the wizards of Unseen University would conjure a filmmaking spell to be able to make the television drama quickly. He replied:

That's very simple. All you need is a good story, a big pot of money, a few hundred people and several months; that's a filmmaking spell. 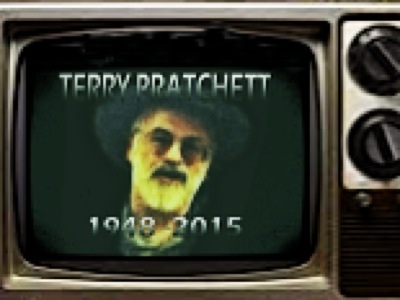 1Formed in 1990 by a merger between British Satellite Broadcasting and Sky Television. The subsequent company, British Sky Broadcasting or 'BSkyB' for short, was popularly known and marketed simply as 'Sky'. In 2014 BSkyB was officially renamed Sky.2In Discworld Noir, the President of the Guild of Archaeologists is called 'Robinson', a reference to Sir Tony Robinson who, as well as being the voice of many characters in the first Discworld computer game and narrator on many audiobooks, was the host of archaeology television programme Time Team.3In The Art of Discworld, Terry Pratchett said of Commander of the Watch Samuel Vimes, 'I've always imagined him as a younger, slightly bulkier Pete Postlethwaite' while Captain Carrot was described with the words 'I feel the closest film star would be a young Liam Neeson'.4Reaper Man.5Combining The Colour of Magic and The Light Fantastic.