Discworld II - Missing Presumed...!? Content from the guide to life, the universe and everything 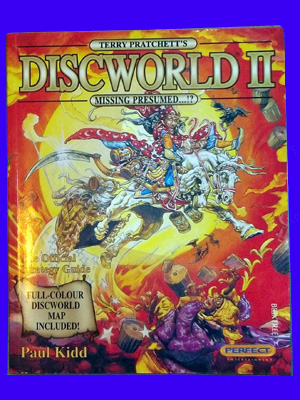 The game is set on the Discworld, a flat world resting on the backs of four giant elephants which stand upon the shell of the Great Star Turtle, A'Tuin. This sequel concentrates on Rincewind the 'Wizzard' (he can't spell very well) who is a natural coward - but adventure always seems to follow him, no matter how he tries to avoid it.

Produced by Perfect Entertainment and Psygnosis, 'Missing Presumed...!?'1 is another Discworld novel cross-blend, this time using Reaper Man and Moving Pictures as the most predominant references. Rincewind was put into these plots as opposed to their relative books' characters as he is the most adaptable for the series - namely because he is a less-developed character (he's a coward and generally runs away from danger), whereas the books' main characters, Death/Susan Sto Helit and Victor Tugelbend, have deep-rooted feelings and opinions.

The game control is point-and-click, ie players must use the cursor on objects to interact with them. This can be very frustrating as interacting with people and objects needs to be done in a particular order to progress. However, it does mean that the game follows a particular storyline, which makes playing it similar to reading one of the Discworld books.

An assassin has planted a bomb in the donkey-cart park under the Fools' Guild2. The Fools didn't know it, but at this point they really could have done with a really good bomb disposal expert passing by... instead, they get Rincewind.

Accompanied by the Librarian (a smelly mon...urm, ape), Rincewind attempts to diffuse it. What? Rincewind? He was drunk, give him a break! Needless to say the coward blows it in more ways than one and the Guild goes sky high leaving a fried Rincewind and one crispy McApe... However, the explosion has an unforeseen effect in that Death was riding over3 the Guild at the time, and when the explosion happens he is sent flying due to a sudden rearing of his horse, Binky.

Around the same time at Unseen University, wizard Windle Poons has died, though continues to live (if that makes sense). There's no Death and therefore presumably no death, leading to many an undead wandering the streets. So it's up to Rincewind, with his Luggage 4, to go and find the items needed to perform the Rite of AskhEnte to bring back the Reaper.

Eric Idle, most well-known for his part in the Monty Python team, reprises his role as the voice of the bad spelling wizard and even writes a song for the game: 'That's Death.' Tony Robinson isn't there to provide additional voices as in the first game, but that is made up for by Nigel Planer, who is joined by Kate Robbins and Rob Brydon.

The point-and-click elements are carried over from the first game, as are the mind-numbingly difficult puzzles5. The puzzles involve Rincewind interacting with various characters by giving them items, being sarcastic, joking, asking a question or just pondering to himself.

Most puzzles in the game are quite ludicrous as the most logical solution may not be the right one, and a lot of the puzzles owe a lot to the laws of Cartoon Physics. Specific examples won't be given here, as the fun of the game is in the solving of the puzzles6.

There are new locations, aside from an improved Ankh-Morpork, such as XXXX, Djelibeybi and Holywood, plus a special 'Apology to Python (Monty) Inc.' for a familiar stoning sequence. More Terry Pratchett humour in the talking even, though he is only 'Throwing rocks from afar...' Some sections can be so silly that they can be attributed more to Idle's Python influence than Pratchett's tales but that just adds to what should be a more enjoyable experience.

If you've read the Discworld novels, that will be a definite help when you're playing this game, as some of the sub-plots and puzzles within the game are taken from the books. However, the game is still fun and playable for those who haven't come across the Discworld before.

1Released as 'Mortality Bytes!' in North America.2He probably had a good reason.3Well, he's Death, he has a flying horse...4Which is a lot more useful than you may think, considering it can walk around on its own...5Or, as Rincewind corrects himself in the game: 'Lateral Thinking Puzzles'.6There is an official guide to the game, and walk-throughs can be found via a quick search on the Internet. These can be very useful for getting past the most difficult, or tenuous, puzzles.