'Going Postal' - the Television Series Content from the guide to life, the universe and everything 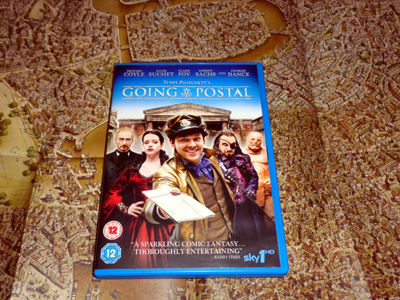 This is the third Discworld book that Mob Films and Sky have done. I'm very pleased with everything that's happened and am very proud to be associated with it.
- Terry Pratchett

Going Postal was the third and last (to date) live-action adaptation of one of Sir Terry Pratchett's Discworld novels, following Hogfather and The Colour of Magic. Filmed as one of Sky's first high-definition dramas and based on the 33rd Discworld novel, it was broadcast over Easter 2010.

Conman Moist von Lipwig is caught and tried and faced with a terrible choice – either die as punishment for his crimes or re-open the Ankh-Morpork Post Office. Agreeing to the latter, Lipwig is placed under the constant watch of a tireless Golem who ensures that he cannot escape. Many consider the Post Office to be a relic of the past, especially Reacher Gilt, the coldblooded owner of the Clacks – a semaphore/heliograph-based communication system invented by the Dearheart family but now ruthlessly run by Gilt following many members of the Dearheart family dying mysterious deaths. The last surviving Dearheart, Adora Belle Dearheart, runs the Golem Trust.

As Lipwig's parole officer is a Golem, he contacts her to learn more about them. He soon realises that he had caused the financial crisis that resulted in her family losing their control of the Clacks to Gilt, who will stop at nothing to sabotage the Post Office's reopening. Can they put their differences behind them to unite and fight their common enemy?

I fell in love with the character of Moist von Lipwig and I have to say as a red-blooded male, even more with Claire Foy as the character of Adora Belle Dearheart, an amazing couple of young actors.
- Terry Pratchett

Popular recurring Discworld places that appear in Going Postal include:

It was a great deal of fun to write and even more fun to watch it being filmed because they let me go out to Hungary and it was like being allowed to play with the train set. I fell in love with what they were doing... When I wandered round one of the sets it had adverts for toiletries for Trolls to remove unsightly lichen and you won't actually find it anywhere, but someone had the foresight to put it up somewhere so that if the camera passed over that wall, it would look real. Real trouble was being taken and it was a delight for me.
- Terry Pratchett

Going Postal is the third and last live-action Discworld television adaptation. Unlike the previous two Sky adaptations, it was not written and directed by Jean Vadim although it was produced by the same independent production company - The Mob. Similarly David Jason did not star, nor does Death appear. It was filmed in Budapest rather than Pinewood Studio, all of which add up to give it a different feel to the previous adaptations. This is exacerbated by the grim Northern England Victorian setting to the story, which is a complete contrast to the Georgian Hogfather and Mediæval The Colour of Magic.

Naturally there are numerous differences from the novel in order to make it more suitable for television. Some minor characters and subplots are excised and there are numerous obstacles introduced to make the love story between Adora Belle Dearheart and Moist von Lipwig more bumpy. Principal among these is that, in the adaptation, Lipwig is seen to have caused the Dearheart family to have lost control of the Clacks through his having been a con artist, rather than the Dearhearts' losing it through manipulation by Reacher Gilt.

The cast are well chosen, with Claire Foy particularly excelling as Adora Belle Dearheart. David Suchet also appears to be enjoying playing the fiend. Sadly both the characters of Mustrum Ridcully and Lord Vetinari the Patrician are played by different actors to those in the previous adaptations2, although Charles Dance excels as Vetinari. The traditional Terry Pratchett cameo rounds the story off nicely.