Angua - A Discworld Character Content from the guide to life, the universe and everything 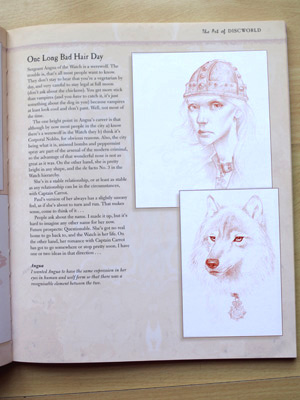 Readers of h2g2 may have come across Terry Pratchett and his Discworld® series of novels, a sword and sorcery pastiche that has 'growed like topsy' and become phenomenally successful. Angua is one of the many interesting characters in the series, appearing in several books featuring the Ankh-Mopork City Watch (AMCW), a collection of individuals who might loosely be described as the law-enforcement service of the largest city on the Discworld.

Angua is, on first appearance, a well-developed young lady with a mass of ash-blonde hair, and an annoying habit of looking at one's neck. She is also very good at her job - even if being a watchman is an unusual occupation for a lady.

When it is full moon, she appears to be a pedigree ramtop wolfhound with an ash-blonde mane round her shoulders.

Several criminals have had reason to curse her presence in the Watch. However, the criminal classes of Ankh-Morpork have got wise to her talents, and now (since The Truth) no self-respecting criminal goes out without a scent bomb. Dropped in a busy place, there are so many powerfully scented trails that she has to go home with a splitting headache.

Angua has formed a relationship of sorts with Captain Carrot (technically, a two metre tall dwarf4). They are attached to each other - but don't hold your breath waiting for a wedding invite! Whether the birth of Vimes' son will change things remains to be seen.

Angua left the Ramtops because she didn't get on with her family. For example, she tries very hard to be vegetarian and if she does end up eating a chicken she will return the next morning and pay for it at the going market rate. Her family, especially her brother Wolfgang, take a different view of the food chain. She is the only person known to have held Wolfgang in a fight, as she proved during the events of Fifth Elephant. Once you've met her relations, you can understand why she left the mountains.

Angua and Wolfgang were the only two classic bi-morphs in the litter. Elsa and Andrei were Yennorks, werewolves who can't change shape. Wolfgang killed Elsa, and Andrei decided to escape and become a champion sheepdog in Borogravia. His insistance on 'pure' blood is one major reason why she hated Wolfgang so much.

She decided to join the Watch because the only other career path available in Ankh-Morpork was as a 'seamstress'5. She was taken on by the Watch when it started its ethnic minority recruitment programme and is still the only 'undead' member of the Watch who lacks a valid death certificate - as Vimes refuses to employ vampires.

Angua is a good example of Pratchett's ability to write strong female characters; let's hope we do see more of her and her 'sisters'.

1Book 15 (1993).2By Corporal 'Nobby' Nobbs, a fellow member of the Watch3Actually '...mor...phor...log...ic...ally gifted'.4Read the books for details.5In Ankh-Morpork seamstress is commonly used as a polite euphemism for 'young women whose affection is, not to put too fine a point on it, negotiable'.