Johnny Depp - Actor Content from the guide to life, the universe and everything 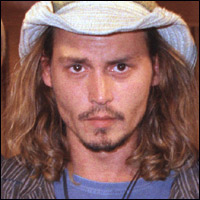 There are Hollywood stars, A-listers, and then there's Johnny Depp. The epitome of cool.
– An h2g2 Researcher.

What is star quality? Are some people born with it, or is it earned from familiarity? Sometimes it takes years of training at performance arts schools, then years of treading the boards churning out endless repetitive lines and praying you don't forget them, to earn your place in the echelons of fame. Then there's Johnny Depp. Born on 9 June, 1963, in Owensboro, Kentucky, USA, his DNA is made up from Cherokee, Navajo, Irish and German ancestry. Where he got the cheekbones from remains a family secret.

All over the world there are millions of girls (and guys!) who idolise this actor, just grateful for having been born in the same time period (at least they're breathing the same air). Depp is worshipped as Hollywood royalty. He's so famous he was invited to a state occasion dinner at Windsor Castle which the Queen held in honour of the new French president and his wife Carla Bruni Sarkozy. This would be perhaps the ultimate accolade, the highlight of a person's life, certainly something to brag to the grandchildren about. What did Depp do? He politely refused, citing a prior engagement.

It's hard to reconcile the image of a gold-plated invitation to sup with HM Queen Elizabeth II, heads of state, VIPs and politicians with the actor who once ticked all the 'bad boy' boxes. Depp certainly had issues as he trashed hotel suites, hurled televisions through windows and whacked intrusive paparazzi. Garnering a following of fans with bizarre tastes was perhaps due to his portrayal of Edward Scissorhands, Gilbert Grape, cross-dresser Ed Wood and various drug-addicted characters.

With his own well-publicised drug-taking and love of booze, to the outside world Depp looked like he was right on track for an epitaph 'Live Fast, Die Young, Leave a Good-looking Corpse'. Even his love life was — unusual, for a high-profile 'celeb'. Once he fell in love that was it, he was faithful to her until it was over.

Before he was a Hollywood megastar, Depp was a member of a band called Six Gun Method (previously known as The Kids). One of the other players had a sister, make-up artist Lori Anne Allison, whom Depp married on Christmas Eve 1983. Lori knew actor Nicolas Cage and engineered a meeting between the two men. Cage suggested acting to Depp, and made some introductions. As Depp's fame grew, so his relationship fell apart and the marriage ended in divorce in 1986.

Since then Depp's list of ex-fiancées continues to fill gaps in celeb magazines. When he was filming Dummies he got engaged to his co-star Sherilyn Fenn. That relationship finished and he dated Jennifer Grey ('Baby' in Dirty Dancing) but that ended before their wedding date came to pass. When his subsequent engagement to actress Winona Ryder terminated, he had his tattoo of her name reworked to read 'Wino Forever'. That now-infamous champagne bath with supermodel Kate Moss has since been denied by Depp, but the hotel concerned still advertises the room where it allegedly took place.

While playing the role of 'Dean Corso' in the film The Ninth Gate, Depp met French singer/songwriter and actress Vanessa Paradis, the woman who was to change his life. After the César1 Award winner gave birth to their daughter Lily-Rose on 27 May, 1999, and John III (Jack) on 9 April, 2002, Depp was quoted in interviews saying:

Having children helped me calm down and reassess my priorities.

When Depp landed the role of 'Captain Jack Sparrow' in Pirates of the Caribbean, he played the first take so camp the director thought he'd gone mad. Depp stuck to his guns and insisted that was how the role should be portrayed: a cross between his own hero Rolling Stone Keith Richards2 and French cartoon heartthrob Pepe Le Pew. The resulting Oscar-nominated character rapidly became as popular as Harry Potter. The film was such a success that it spawned two sequels with merchandise rivalling the renewed interest in Doctor Who.

The Importance of Family

Voted People Magazine's 'Sexiest Man Alive' in 2003, Depp couldn't care less and eschews the Hollywood celeb circuit, preferring to stay at home playing happy families when he's not filming. He said when Lily-Rose was born that that was the day of his rebirth, and he'll tell anyone who will listen that his family saved him from self-destruction.

Knowing they are such a devoted family, it's hard to imagine what the parents went through in March 2007 when Lily-Rose became so seriously ill with E.coli poisoning that she was admitted to intensive care at Great Ormond Street Children's Hospital, London. Filming was delayed on Sweeney Todd while Depp and Vanessa stayed at their daughter's bedside; thankfully she recovered from acute kidney failure. Depp later arranged for his 'Captain Jack' Pirates Of The Caribbean costume to be flown over from the US so he could bring some cheer to the patients. Grateful for his daughter's complete recovery, Depp donated a seven-figure sum to the hospital in January 2008. So it's no mystery why Depp turned down the regal invitation; he was probably enjoying one of his favourite pastimes, watching cartoons with his children.

Depp displayed his generous nature again when he agreed to help finish the film The Imaginarium of Dr Parnassus after the death of its main star Heath Ledger part-way through filming. Depp, as well as Jude Law and Colin Farrell who also played Ledger's part, agreed to donate their pay to Ledger's daughter Matilda, who was only two when her father died, and he had not updated his will to include her prior to his death.

1The French equivalent to the Oscars.2Who played the role of Captain Jack's pirate father in the third instalment: Pirates of the Caribbean: At World's End.