Reindeer Content from the guide to life, the universe and everything 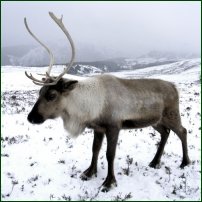 Reindeer, Rangifer tarandus, are a kind of deer found in the colder regions of Europe and North America, and which are domesticated in many parts.

In North America, the reindeer is known as the caribou, and although very similar, reindeer tend to be shorter and stouter; and the snouts of reindeer tend to be flatter. However, reindeer and caribou are sufficiently closely related that they can interbreed, and this interbreeding would most likely be between a male caribou and female reindeer, due to caribou usually being more dominant.

Reindeer range in height from about 87 to 140 cm (34 to 55 inches) to the shoulder, and are brown with white undersides.

Female reindeer, known as 'cows', typically reach reproductive maturity as yearlings and may stay productive up to 15 years of age. Bulls, on the other hand, usually don't mate until they are about three years old. The average life expectancy of reindeer is about eight years, and usually ends as a result of their final breeding attempt. Breeding takes place in August and September with calving peaking around 24 April. There is thus a one month difference for breeding and calving between reindeer and caribou, thus providing another difference between these two variants.

Reindeer and caribou are the only members of the Cervidae (deer) where both males and females produce antlers, the primary function of antlers being for achieving social dominance. A secondary function is for sweeping aside snow which may cover 'reindeer moss'. For this reason, the antlers of both males and females have a branch close to the base which projects forwards and functions as a shovel.

Antlers are shed seasonally1 and, when this occurs, even the largest reindeer in the herd drops to the very bottom of the pecking order, even below juvenile reindeer with their only rudimentary antlers. Bulls drop their antlers by January, and pregnant cows and calves retain theirs until spring. Normally, pregnant cows retain their antlers for a week or so after calving to gain advantage over limited food resources. Thus a reindeer with antlers can easily overcome an animal without antlers. New antler growth in the spring and summer is nourished by a highly vascular covering called velvet, which is shed in August. Bull antler ossifies (hardens to bone) in June while cow antler ossifies in July.

Reindeer, like all cervids and bovids, are ruminants. Their physiology is specialised to eat and digest lichen, a type of flowerless plant growth consisting of a symbiotic relationship between an alga and a fungus which often appears as a crust on rock, trees etc. The lichen is used as an energy source during winter, and is sometimes called 'reindeer moss'. Lichen grow extremely slowly and so reindeer are migratory, in order not to run out of food. For this reason, the traditional 'reindeer herders' of Lapland live a nomadic lifestyle.

Reindeer are classified as 'concentrate selectors' to 'intermediate foragers' which means they select higher quality forage, in contrast to cattle and bison which are classified as 'generalist grazers' because they eat large amounts of lower quality forage. For example, if offered longstem hay, reindeer will eat only the more palatable leafy parts.

Free-ranging reindeer search for emerging buds, leaves and flowers of sedges and dig for rhizomes in the spring, followed by willow leaves, forbs2, and mushrooms as they emerge in early summer.

Reindeer prefer to eat snow than to drink water in winter. The lack of minerals in snow and the low amount in lichen minimise the reindeer's requirement for water. Furthermore, it is physiologically more economical for the reindeer to melt snow than to search for and warm copious amounts of water, as the energy losses are less.

As winter conditions may still prevail at the time when calves are born, adult cows are nutritionally stressed during springtime. Hence, they are known to eat rodents, eggs, placenta and chew on shed antler in order to acquire limited nutrients such as calcium and phosphorus.

Adaptations For Life in the Arctic

Like that of the polar bear, reindeer hairs are hollow. Reindeer hair is also extremely dense, the outer coat of long 'guard hairs' being at a density of 775 hairs/cm2. A fine 'woolly' hair of over 2000 follicles per square centimetre as an undercoat functions as an efficient air trap. This thick coat reduces heat loss by radiation and allows them to lay on snow without it melting, and so this has been likened to the reindeer being wrapped in a duvet.

Facial hair extends down to their lips, protecting the muzzle when grazing in snow.

The hollow guard hair provides buoyancy facilitating their swimming ability. Their multi-coloured coat allows for camouflage, an advantage for free-ranging reindeer. However, other adaptations such as preventing radiation and lack of sweat glands for heat conservation in winter may actually cause stress in warm weather. Hence, in summer reindeer shed their guard hair to expose their soft, dark undercoat.

The bone and cartilage which make up reindeer's nostrils are specialised structures known as 'nasal turbinates', which resemble a rolled-up scroll or newspaper. They vastly increase the surface area inside so that, as the incoming air follows this spiral route, it is warmed by the blood. As the animal exhales moisture condenses and is retained in order to humidify the air on inhalation.

Reindeer hooves are large in relation to their body size and are splayed, allowing the reindeer's weight to be distributed over a relatively large area, thus enabling them to walk on snow without sinking into it. The hooves are concave and do not have pads, but do have patches of hair inside which facilitate grip on a slippery surface. It is thought that the edges may act as blades. The shovel-like design also helps with swimming and foraging for lichen (cratering); indeed, the name 'caribou' comes from the Native North-American Indian (Mi'kmaq3) word meaning 'shoveller' in recognition of this habit.

Reindeer have a relatively high-stepping gait combined with a trot, so their gait is a combination of that of a horse with a camel. Because they are not as long-legged as caribou this makes them slower, and is thought to explain a higher predation rate of reindeer in mixed reindeer/caribou herds.

It is believed that reindeer have been domesticated in Eurasia for at least 7,000 years, which is longer than the horse4. As a result of this, most European reindeer are tame or domesticated, being herded by the Lapps (also known as the Sami - peoples who roam the north of Russia, Finland, Norway and Sweden) and the Inuit. At one time, the Lapps used to depend entirely upon reindeer for milk, meat5 and leather but, nowadays, many Lapps live in villages and buy their food, clothing and other items from stores and traders. However, some Lapps still retain the old nomadic way of life, and herd reindeer.

As a further consequence of domestication, reindeer tend to stay in more cohesive groups than do the caribou of North America. When herded or chased they tend to run in a tight group, whereas caribou often scatter.

Reindeer have a predilection for the psychotropic mushroom, fly agaric (Amanita muscaria), which is found in pine and birch woods of western North America, Northern Europe, and Asia. This has led to the Sami custom of actually feeding fly agaric to their deer and collecting the urine to drink. This gives a 'high' similar to that of taking LSD. Such is the liking of the reindeer for the toadstool hallucinogens that they, in turn, will eat the snow on which intoxicated humans have urinated, thus setting up a repeating cycle.

The white-spotted red cap of the fly agaric, the flying hallucinations caused by its intoxicants, and the associations with reindeer and Siberian shamanic customs have all become integrated into the modern day imagery of Santa Claus; with his red coat and white trimmings, his flying sledge drawn by reindeer who, like the shaman, arrives down the chimney - a feature of the winter dwellings or yurts built by Siberian tribes.

Deer antler velvet has been known to Traditional Chinese Medicine (TCM) since 168 BC. In recent years, research has shown that velvet has certain health benefits, including increasing the stamina of athletes, promoting healing following surgery and prevention of osteoporosis and arthritis.

The velvet trade began to take off in Australasia in the late 1970s, where the deer are farmed. A thriving export trade, initially to Korea, but later to China, Taiwan and Hong Kong has developed.

Reindeer as Symbols of Christmas

Although English texts from the Renaissance mention reindeer antlers being displayed during Christmas festivities, the first reference in print connecting Santa Claus and reindeer appears in the 1823 poem 'A Visit from St. Nicholas' by Major Henry Livingston Jr. In this poem, a miniature sleigh is pulled by eight tiny reindeer named Dasher, Dancer, Prancer, Vixen, Comet, Cupid, Donner and Blitzen. Interestingly, the name 'Donner' means 'thunder' in Dutch and 'Blitzen' means 'lightning' in German.

This poem, more than anything else, has firmly established reindeer as one of the symbols of Christmas, the association being further popularised by the Johnny Marks hit song, 'Rudolph the Red-Nosed Reindeer', published in 1949.

Where to see Reindeer in the UK

The Cairngorm Reindeer Centre, in Aviemore, Inverness-shire is home to Britain's only herd of reindeer, found free ranging in the Cairngorm mountains in Scotland.

Click here for a downloadable educational resource on reindeer.

1Indeed, deer velvet can grow at up to 2cm per day and is unique in that it is the only mammalian organ to fully regenerate each year. This means that all support tissues, including blood vessels, must also grow at that rate, and so there are factors in deer antler velvet which facilitate this. For this reason, there is scientific interest in deer antler growth for understanding how cancers occur, and for various therapeutic applications, such as tissue repair and wound healing.2A forb is any herb that is not grass, such as wildflowers; from the Greek pherbein 'to graze'.3Native North American Indian tribe from Nova Scotia.4The most common date for domestication of the horse - which was to provide a means of transport- is c. 2000 BC. However, recent theories put it as early as 5600 years ago.5Reindeer milk is extremely high in protein and fat and many of the internal organs are relatively large compared to those of other domestic animals. These factors facilitate a more rapid growth rate thus increasing survivability, especially for free-ranging reindeer.