History of the Cherokee Language Content from the guide to life, the universe and everything 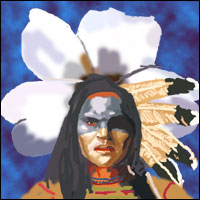 At the dawn of the 18th Century, the Cherokee population was established in an area comprising at least thirty-five thousand square miles in what is now North America: the Southeast, Appalachian mountains, Western North and South Carolina, Tennessee, Alabama and Georgia. The language of the Cherokee is part of the Iroquoian family, and it is assumed that the linguistic separation occurred at around 3000 years in the past, when the Cherokee population migrated to the territories previously mentioned. Tsalagi broke into two different dialects due to the migrations caused by both the Revolutionary Wars and The Removal. Some Cherokees managed to evade the removal and hid themselves in the territory of the North Carolina Mountains, forming what is today known as the Eastern Band of the Cherokees.

If there ever was a form of written language amidst the Cherokee tribes, its use most likely decreased and eventually was forgotten in the space between the 16th and 18th Centuries, due mostly to the repeated migrations and the abrupt change of lifestyle the encounter with the Europeans had produced. Had the situation declined further, it is very likely that the Cherokees would have lost their language - had it not been for Sequoyah.

The Man Known As Sequoyah

Sequoyah was born near Fort Loudoun, in the village of Tuskegi on the Tennessee river in 1776, and was given the name 'Sikwoya'. It is believed that he was probably born handicapped, for the name Sikwo-yi is Cherokee for 'pig's foot'. He learned the art of the silversmith when he moved to Georgia, where he was required eventually to sign his works (as many silversmiths had started to do). This encounter with the white man's written language could be considered the spark that would later give birth to the idea of the Syllabary. His idea was reinforced by his experience in the Creek War, where he was able to observe the American soldiers using code and writing letters, reiterating the importance a written language system had in a culture.

It is said that in ancient times, when writing first began, a man named Moses made marks on a stone. I can agree with you by what name to call those marks and that will be writing and can be understood.

This is a quote that has been attributed to Sequoyah in respect to the written language. He began his work in the Syllabary the year after he had been discharged, in 1815, when he married under tribal tradition. It was also a year later that he was found signing a treaty with fourteen other Cherokees in a Chickasaw council house.

The Birth of the Syllabary

The development of the Syllabary was an experimental experience for Sequoyah. He would sit with his daughter Ayoka and play games of association using symbols - the intensity of his research bordered on the obsessive, which turned him in to a recluse. He faced constant ridicule in the face of both tribe and family, even suffering the accusation of practising witchcraft. He eventually moved to Arkansas to complete his work and finally, after twelve years of hard toiling, he produced his synthesis of the Cherokee language in 86 symbols. He had analyzed and decomposed the Cherokee Language into different groups of sounds composed of vowels and consonants.

It took native Cherokee speakers only a few days to master and, impressed by both its adaptability and its simplicity, it started to be accepted by the members of the tribe. Encouraged by this success, Sequoyah joined others in the immigration west, to the region of the Arkansas River, where he continued the education of his fellow tribe members of the Western Band. He returned to the Cherokee Nation again in 1821, witnessing the adoption of his system by his tribesmen, and back to Arkansas again in 1822, carrying messages written in the Syllabary from one band of the tribe to another.

Originally, the system that Sequoyah presented was in the form of a tablet consisting of sixteen rows and six columns, each symbol representing the combination of a consonant and a vowel. In 1828, with the help of the new Syllabary, the Cherokee Nation established the Cherokee Phoenix, the first newspaper published for and by Native Americans. In 1826 the Council had approved the construction of a printing office for the Phoenix, and in 1827 they acquired their printing press. The US government recognised the language rights of the Cherokees under a treaty in which they agreed to subsidise The Phoenix.

The Trail of Tears

However, in the 1830s President Andrew Jackson (whose life had been saved by the Cherokee in the Creek war) showed an immense amount of ingratitude through the initiation of the Removal. The Cherokees used the Phoenix to form a group of journalistic resistance. However, this endeavour soon ended after the confiscation of the press. This is what is now known as 'The Trail of Tears' or 'The Trail Where They Cried', for more than one third of the tribe died en route to the new territories in Oklahoma.

However, the indomitable Cherokee spirit would not lay low with this new setback. Instead, once settled they went out to establish twenty one schools for the use of the Cherokee, in which Sequoyah's Syllabary was used. Through the employment of this new writing method, the Cherokees reached a level of 90 percent literacy in the Cherokee language within the tribe - an unforeseen event which was testimony of the tribe's relentlessness.

In 1842 Sequoyah resumed his travels, this time to Oklahoma (home of the Western Band), in hopes to spread the use of his Syllabary. It was a hostile road and a very taxing endeavour, it is believed that Sequoyah died in 1842 near San Fernando, in Mexico. According to a 1969 Senate report on Indian education, the schools in the 1850s achieved a greater English literacy than the white populations of Texas and Arkansas. Several attempts to impede the natives to express their self-assurance were made by the government, such as the report of the Indian peace commission of 1868, in which it was recommended that the 'barbarous' language of the Indians be completely eradicated.

This ethnocentric procedure began in 1879, when the government started separating native American children from their parents, in hopes of inoculating the English language into their society and sever them from their roots. Native Americans were punished when caught speaking their tribal tongues, even if they could speak no English at all. Current Senator Ben Nighthorse Campbell of Colorado, a member of the Northern Cheyenne tribe, describes the experience, where he relates that both of his grandparents were forcibly removed from their homes and placed into boarding schools. Their mouths would be washed with soap every time they would be caught speaking in Tsalagi.

Survival of the Tsalagi Language

Although the goals of this campaign were almost successful, the roots of the Cherokee people were stronger than the adversities they faced, for although a reduced number of Cherokees could speak their native language fluently at the beginning of the 20th Century, currently the language is taught to the younger generations within Cherokee. Teachers and publications act as advocates for the preservation of the language, which is a key to their culture. Within the political structure of the Eastern Band territory, this has become an obvious priority. Campaign ads in 1999 publicised the different candidates' support for research, education and preservation of the Cherokee language - including Stephanie Wickliffe-Shepherd, John Ketcher, Don Crittenden and Melvina Shotpouch, among others.

Continuing its role as a voice for the Cherokee, The Phoenix, now Cherokee Phoenix and Indian Advocate, report frequently on this subject, particularly on the educational efforts of language teachers such as Eddie Bushyhead, Denise Rooster, the support of Chief Chad Smith towards the revitalisation of the language, or the Cherokee Cultural Immersion camp which took place in July of 2001, where youths of all ages belonging to the Cherokee nation went to Tahlequah to participate in courses about historical custom and language.

My kids don't talk Cherokee, and now they wish they'd learned. I like to hear our language, especially from our younger generation. I think it's good that we try to teach people their own language.
- Lucille Hair, 83, in an interview with The Phoenix