The Polar Bear Content from the guide to life, the universe and everything 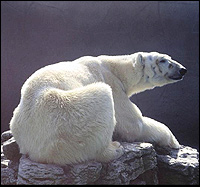 Forget those polar-bears featured on Coca-Cola adverts around Christmas: this entry talks about the real live ones that live and breathe in the same world that we do.

One might think that a polar bear's difficulty would be in keeping itself warm in the cold, icy regions which it inhabits, as its body temperature is roughly the same as that of humans. In fact, the polar bear is actually quite well adapted to its habitat, as it has more than one way in which to keep warm. For one thing, the polar bear has a five- to ten-centimetre layer of blubber, which provides insulation against the cold air and water, as well as acting as a nutritional reserve which it can survive on when food can't be found. A winter sleep can also provide a polar bear with the ability to keep warm. Usually undertaken by pregnant females, this means entering a rest period in which the polar bears do not hibernate — they just merely sleep in dens, ready for their offspring to arrive. Polar bears also have small ears, a small tail and black skin, which prevent heat loss. But probably the most interesting method by which a polar bear keeps warm is through its hair. The idea is that a polar bear's hair is made up of clear, hollow tubes filled with air that absorb the sun's rays and provide a polar bear with warmth. However, what happens in the winter when there is no sun? Questions like this make the hair theory controversial. However, whether this theory is right or wrong, polar bears, it seems, are actually more concerned with staying cool, rather than staying warm — which is why they conserve their energy by lying in wait for a tasty morsel to come by instead of actively going after food.

Now that government regulations on hunting have been enacted, it is estimated that there are about 21,000 to 28,000 polar bears in the world. These new anti-hunting regulations have brought about an estimated population increase of 10,000 since 1968. Polar bears can be found in Greenland, Spitzbergen (near the Arctic Circle), parts of the United States and the Arctic islands of Norway, Canada and Russia.

The Arctic plays host to many a polar bear, who are perhaps the most nomadic of all bear species. There are two categories of polar bear in Alaska: those in western Alaska, primarily near the Chukchi and Bering Seas, and those in the Beaufort Sea off northern Alaska. The bears will travel an average of 5,500 miles a year, or 15 miles a day.

The polar bear inhabits the North Pole's seas, ice, islands and continental coastlines. They prefer sea ice as a habitat, for it enables them to hunt seals in the leads1 that are close to continental coastlines or islands. One particular region that is inhabited by many polar bears is the 'Arctic ring of life', which runs alongside the polar basin coastline. This region is dense in rich systems of leads and polynyas: areas of water which are surrounded by ice that stay open throughout the year, due to winds, upwellings and tidal currents. They provide important breedng and feeding areas for wintering or migrating marine mammals and birds. It is commonly known that the polar bear is well-suited to swimming the icy waters of the Arctic regions because of its partially webbed feet and water repellent fur. But although water plays an important role in the life of the polar bear, they do not spend all their time in the water. Pregnant females spend most of the time in land in maternity dens, and bears in warmer climates can become stranded on land when the ice melts in the summer. The temperatures that wild polar bears experience appear to average at -34°C (-29°F) in the winter and 0°C (32°F) during the summer. Northeastern Siberia plays host to the coldest temperatures during winter: temperatures as low as -69°C (-92°F) have been recorded.

Polar bears are strictly carnivores. They hunt and live off a diet of ringed seal, harp seal, hooded seal and the occasional baby walrus if one can be found. They scavenge the carcasses of whales, narwhals and walruses which sometimes allows people to see whole groups of polar bears feeding together. If these delicacies are not to be found the polar bear won't go hungry. Instead they turn to other marine mammals, reindeer, small rodents, sea birds, fish, eggs, vegetation such as kelp, berries and human domestic rubbish. It is believed that a polar bear's stomach can hold up to 15% to 20% of its body weight and digest 84% of the protein and 97% of the fat it consumes. In order to survive, the polar bear must consume around 2kg (4.4lbs) of fat each day of its life. It is believed that a ringed seal, weighing in at around 55kg, could sustain a polar bear for eight days. In order to find this succulent seal meal, polar bears wait patiently by the icy water for the seal to raise its head. Then the bear will knock the seal out with its paw and throw it onto the ice. Polar bears have also been known to stalk their prey: once a polar bear has spotted a seal, it will stalk it from around 15 - 30m away before it quickly charges to intercept the seal. Polar bears have also been known to employ this tactic while in the water. During spring, they even stalk the birth lairs of seals. On finding a seal's lair, the polar bear will wait patiently until it hears a noise. Then it will smash up the lair and grab as many seals as it can find. This method is usually used by female polar bears, who have young children of their own and believe that the seals would be sufficient nourishment for everyone.

The polar bear's daily schedule mainly consists of two things: saving energy and hunting. Polar bears don't hibernate in the 'traditional' way. Pregnant female polar bears do dig dens and hibernate in them, but other polar bears enter what is known as 'walking hibernation': they are still actively searching out food, despite the fact that their metabolic processes decrease. Polar bears depend on their sense of smell to guide them to their food and their white-furred coats provide an ideal form of camouflage in snow. Their day is broken up into three parts. The first third is when they are most active, and their energy gradually decreases throughout the day. It is believed that females spend about 19% of their time hunting with their cubs in spring and about 38% of their time doing so during the summer. Adult male polar bears hunt for about 25% of their time in spring and about 40% of their time in summer. If polar bears are not hunting, they will usually be found sleeping or sunbathing, if it is warm enough. During the colder seasons, they will more often nap in a warmer place, such as a cave.

When female polar bears reach the age of five, they are able to give birth. Beginning in late October or early November, pregnant females go into hibernation in dens on the coastal mainland or on drifting pack ice, remaining there until early spring. To be successful in their pregnancy, the polar bears have to maintain an ideal weight of at least 200kg. Most female polar bears give birth once every three years, though some will reproduce as often as once every two years. Litters commonly range from one to four cubs. Newborn babies weigh around 0.5kg, but by the time they emerge from hibernation in the spring they will weigh up to 7kg. Learning from their mothers, the little cubs are quick to take things in. At two years of age they will be chased off by their mother or by another male competing for the mother's affections.

Threats to the Species

Although polar bears are not officially listed as endangered or threatened they are under observation from many organisations such as the International Union for the Conservation of Nature (IUCN). This organisation believes polar bears' primary threat to be global warming, though chemical pollutants and oil and gas development in the Alaskan region could also lead to them becoming an endangered species.

Scientists believe that global warming has affected the polar bears in terms of their body size and reproductive success and has caused them to fast during the prolonged ice-free summers that they now have to face. These ice-free summers have caused many polar bears to be stranded onshore for longer periods and to lose a critical amount of their body weight in the process. Pregnant female polar bears are becoming increasingly unable to tend to their young properly or produce much milk, since they have lost so much body weight that they are forced to leave their young to die. Some expectant mothers lose so much body mass that they are unable to give birth at all and this has led scientists to note a 15% decrease in the birth rate.

Chemical pollutants also cause problems for the polar bear, as they concentrate in the bears' prey and cause immune deficiency and poor health in some polar bears. Furthermore, it is possible that the US Government will start drilling for oil and gas on the Arctic National Wildlife Refuge in northeastern Alaska. Currently this region provides the best dens for polar bears in North America, but with the introduction of the proposed oil and gas development the species may be doomed to extinction.

1Water channels which only stay open for a limited time.