Trinity - the Number Three Content from the guide to life, the universe and everything 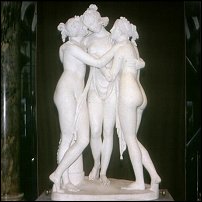 Ancient Greeks who studied under Pythagoras considered three to be the first true number. When they arranged three points in a line, it had a beginning, an end, and, unlike two, something in between. As the first true number, it was revered, and their mythology was full of things that came in threes:

It wasn't just in Greek mythology; trinities of gods existed in Egyptian and Babylonian cultures, too, as it does in Christianity today, with its three-part 'Godhead': the Father, the Son and the Holy Ghost. Other Christian threefold symbolism includes the Three Wise Men, and Peter's three-times denial of Jesus. In the 16th Century, an obsession with the symbolism of the Trinity led the persecuted English Roman Catholic Thomas Tresham to build Rushton Triangular Lodge, an incredible shrine to the number three.

The Language of Three

Three may be the lowest number of things that you might categorise as a 'group'. We might use a casual phrase like 'three or four' of something, whereas if we weren't sure of its plurality we'd say 'one or two'.

Unlike one and two, three shows a remarkable uniformity in language. Nearly all the associated English words begin with the tri- prefix. The word 'three' came to English from an old German word, but the root of this provided the word for 'three' in the most common of the ancient and modern European languages.

Three is a popular number for judges or governors. The Romans had triumvirs (literally 'three men'), and today we have tribunals of three judges, notably to settle employment disputes. Another committee of three is the Russian Stalinist troika, also the name for a Russian three-horse carriage. A three-horse sled inspired the jingly piece of music of the same name, composed by Sergei Prokofiev for his Lieutenant Kije suite.

The word triad has been applied to various sets of three, deriving from the Greek trias. Its most notorious use is for the Chinese organised crime syndicates which control much of the economy of Hong Kong, but also operate in other cities around the world. Triads originated as a revolutionary political movement in the 18th Century, the name referring to their use of triangular symbols.

Some words are less obviously derived from 'three'. Do you grow garden plants up a lattice called a trellis? This derives via French from the Latin trilix 'triple-twilled', in the sense of weaving. Travail, meaning 'hard toil' in English, but something far less arduous in French, can be traced to the Latin tripaliare, meaning 'to torture', and implying the use of an instrument with three prongs. We call long hair tresses because it can be braided into three strands; the word derives from the Greek trichia, meaning 'threefold'.

One word which is slowly disappearing is thrice, for 'three times'; indeed, 'twice' is also disappearing in American English. The sequence 'once-twice-thrice' goes no further. The sequence 'first-second-third' goes further, of course, but third is the last of the unusually-formed ordinal words: the subsequent ones are generally formed by appending '-th'. Performing an act three times can be seen as a limit of thoroughness. Fans of Belgian beer may enjoy the three-times-fermented tripel over the twice-fermented dubbel, but that is deemed sufficient: there is no quadrupel.

'Third' has a number of special meanings. A tough police interrogation is sometimes described as the third degree. This derives from a similar ceremonial interrogation used in freemasonry, the third stage of an initiation. The Third World is a common term for the developing world, but the terms 'first world' and 'second world' (for the West and the Soviet bloc respectively) never caught on.

Three being a small number, some of its mathematical properties can seem somewhat trivial. In fact the word 'trivial' itself is related to three. In the Middle Ages there were seven liberal arts. Four of these were the sciences of arithmetic, geometry, astronomy and music, known as the quadrivium (literally 'a place where four roads meet'). The other three were the more elementary disciplines of grammar, rhetoric and logic, known as the trivium ('three ways'). It was William Shakespeare3 who first used the word 'trivial' in the sense of 'trifling' or 'unimportant'.

As a number of items in a group, three is easy to count in a single glance, whereas for larger numbers we may need to mentally decompose them. If, say, we had a group of seven stones, we might well visualise them as 'three plus four' to count them, rather than seeing at once that they are seven.

Our physical world exists in three dimensions, whereas we often try to represent it in just two of those. One of the simplest three-dimensional or solid figures is the cube, which has the same length, width and height, and we refer to numbers raised to the power of three as 'cubes'.

In two dimensions, the simplest figure we can draw is the triangle, which has 3 corners (or vertices) and 3 edges. It's the simplest shape which you can use for tiling a floor without leaving any gaps4. In fact, there are exactly three regular figures you can use on their own to tile a floor, the others being squares and hexagons. We have identified a number of triangular star formations in the night sky, including the constellations Triangulum and Triangulum Australe, and the asterisms known as the Winter and Summer Triangles.

Any three points in space can be joined by a two-dimensional plane. This is the reason we have three-legged camera tripods and milking stools: four-legged versions would wobble on an uneven floor. Another well-known geometrical property is that if you draw any three points on a piece of paper then you can draw either a straight line or a circle which passes through them all.

Threefold symmetry is far less common than two, particularly in the natural world, although some plants like the trefoil (clover) and the stunning Mexican tiger flower do display it. In the animal kingdom, some leeches have three jaws and will take a Y-shaped bite. A few well-known logos also have this symmetry, including the international radiation hazard symbol, and the flag of the Isle of Man5. These logos conveniently demonstrate the two types of symmetry: both have rotational symmetry, but the radiation symbol has three reflective lines of symmetry, too.

Ancient mathematicians had an obsession with calculating the exact value for the constant π (pi) – the ratio between a circle's diameter and its circumference. Some early civilisations, including the Babylonians, believed it had the value three, but later mathematicians found more accurate estimates for it. Today, we have computers which calculate it to millions of decimal places, but we know that the sequence 3.141592... has no end.

In arithmetic, there's a quick way to tell if a number divides exactly by three; you simply add up the digits and see whether the sum is itself divisible by three.

The Meaning of Three

For all its language and mathematical properties, three has a number of special meanings. In literature, it's popular to write trilogies, novels spanning three books (with the odd notable exception). It could be argued that the three elements of the trilogy represent the three-stage process of reasoning – thesis, antithesis and synthesis – attributed to the German philosopher GWF Hegel. The thesis is the proposition, the antithesis is the opposite view or contrast, and the synthesis is the resolution of the two.

On a lighter note, the number three is particularly prevalent in nursery rhymes and fairytales. Could we really imagine a different number of bears, blind mice or bags full? Could a genie grant anything but three wishes? Perhaps echoing the Greek Furies or Graeae, three is a popular number for a group of witches, featuring as such in works from Shakespeare to Pratchett.

Bad things come in threes, so the saying goes, or do we only notice them when there are three? When we've waited hours for a bus, three are bound to turn up at the same time. When Ian Fleming's villain Auric Goldfinger encountered the British spy for the third time, he said:

Mr Bond, they have a saying in Chicago: 'Once is happenstance, twice is coincidence, the third time it's enemy action.'

Sequences of three are often used to stress or reinforce an idea or action. UK Prime Minister Tony Blair's three priorities were 'Education, education, education', echoing the claim by estate agents that the most important features of a property are 'location, location, location'. The 'rule of three' has been used by speechwriters since ancient times, as we see in phrases such as Julius Caesar's 'Veni, vidi, vici'. Shakespeare has Mark Antony famously open his speech at Caesar's funeral with 'Friends, Romans, countrymen'.

But for such a small number, a group of three can often be excessive. An American saying about children goes 'One is one, two is fun, three is a houseful'. Diana, Princess of Wales famously said of her marital problems: 'There were three of us in this marriage, so it was a bit crowded', although Oscar Wilde humorously wrote: 'In married life three is company and two none'. Another proverb tells us that 'three can keep a secret... so long as two of them are dead'.

1That is, three old women who were spinning cloth - not three who were constantly rotating.2We're sure there's a joke in there somewhere, and we're equally sure that we don't want to hear it.3We haue but triuiall argument, More then mistrust, that shewes him worthy death.
— Henry VI part 2, III. i. 241.4This is known as 'tesselation'.5The three-legged symbol is known as a 'triskele' or 'triskelion'.