Sergei Prokofiev Content from the guide to life, the universe and everything 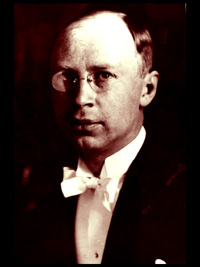 One of the first pieces of classical music that many children are exposed to is 'Peter and the Wolf', Op 671, by Sergei Prokofiev. It is an orchestral piece with a narration, telling the story of a boy called Peter, and his adventures one day when he encounters a wolf. Each of the characters in the story is represented by an instrument or group of instruments with their own particular themes. The piece is used to familiarise children with the instruments of the orchestra.

Sergei Prokofiev was born in Sontsovka, Ukraine. He was an only child, and his mother, an amateur pianist, encouraged him musically. He first composed at the age of five.

In 1904 he went to the St Petersburg Conservatory to study piano and composition. While there, he gained a reputation as an 'enfant terrible'. During his time there, he prompted the director, Glazunov, to walk out of a performance of the 'Scythian Suite', Op 20, because he feared for his sense of hearing.

After the Russian Revolution, Prokofiev travelled to America, with the permission of the authorities2. At first, he was very successful, touring as a pianist, as well as with music he had composed, like his 'classical' symphony, 'Symphony no 1 in D', Op 25, and the 'Scythian Suite'. However in 1920 he moved to Paris, and remained there until 1936.

When he returned to Moscow, he was just in time for the Communist crack down on music that did not meet Stalinist ideals. In 1948 he and Dmitri Shostakovich as well as several other Russian composers were made to publicly sign a confession, saying that their music was bourgeois and 'formalist', that is, not trying to represent the feelings of the mass of people.

Prokofiev died in 1953 on the same day as Stalin, as such he was unable to benefit from the relaxation of government policy towards the arts.

Prokofiev himself characterised his style with 'five lines'; five ideas that underpin the majority of his music. These are:

1'Op 67' is short for Opus number 67. Opus numbers are assigned to pieces of music to catalogue them.2This was somewhat exceptional. Stravinsky and Rakhmaninov both went to America without permission, to be free of the Communist regime.3c.1750 - 1810. See A brief history of Western Music.