The Three Wise Men Content from the guide to life, the universe and everything 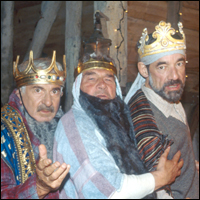 Now when Jesus was born in Bethlehem of Judaea in the days of Herod the king, behold, there came wise men from the east to Jerusalem, saying, Where is he that is born King of the Jews? for we have seen his star in the east, and are come to worship him. Matthew 2:1.

The story of the wise men seeing and following a bright star to the birthplace of Jesus in Bethlehem is one of the most familiar and vivid stories of The Bible, yet they are somewhat shadowy people. The only reference to them in the New Testament is in the Book of Matthew. Furthermore, Matthew's gospel doesn't even say that there were three of them; this has been interpolated from the fact that three gifts were presented to the baby Jesus:

And when they came into the house , they saw the young child with Mary his mother, and fell down, and worshipped him: and when they had opened their treasures, they presented unto him gifts; gold, and frankincense and myrrh. Matthew 2:11.

By elaboration of the content of Matthew 2:1-11, Christians have come to accept as fact that:

These 'facts' as detailed above are enacted by children in Nativity plays every Christmas, and yet none of them can be found in the Bible. Indeed, the Gospel of St Luke, as well as being the only place in the Bible where the word 'manger' appears, makes no mention of 'wise men' or of a bright star hovering above Jesus' birthplace:

And so it was, that, while they were there, the days were accomplished that she should be delivered. And she brought forth her firstborn son, and wrapped him in swaddling clothes, and laid him in a manger; because there was no room for him in the inn. Luke 2:7.

Furthermore, according to Luke, it was not kings or 'wise men' but shepherds who visited the baby Jesus at his birthplace:

And it came to pass, as the angels were gone away from them into heaven, the shepherds said to one another, Let us now go even unto Bethlehem, and see this thing which is come to pass, which the Lord hath made known unto us. And they came with haste, and found Mary, and Joseph, and the babe lying in a manger. Luke 2:15-16.

The earliest depictions of the Nativity, dating from the catacombs of 4th-Century Rome, agree with this more humble nature of the wise men. Here, they are shown wearing Persian dress of trousers and Phrygian caps, usually in profile, advancing in step with their gifts held out before them. The style of trouser is that usually worn by horse-men. Scholars now believe that the wise men were priests of Zoroastrianism1, the main religion of the Persian empire. It is possible that they made their journey on horse-back rather than on camels.

The term 'wise men' translates to the Greek word magos or 'magians' (plural, 'magi') from which we derive the modern word 'magic'. Clay tablets recovered from the Persian city of Babylon indicate that such priests were expert astrologers, able to chart the movements of planets. The Magi looked to the stars for guidance, and used their horoscopes to decide, for example, when to plant their crops or to move their livestock. They also used their skills to help predict the birth of kings. Like the Jews, the Zoroastrians believed that a Messiah would descend from the heavens to establish the kingdom of God on Earth.

According to a sermon given by the Bishop of Durham, further evidence that the 'wise men' were, in fact, astrologers comes from a rather specific Greek word used in the Gospel according to Matthew, for which there is no accurate English equivalent. The English word chosen in the translation is 'diligently':

And he [Herod] sent them to Bethlehem, and said, Go and search diligently for the young child...' Matthew 2:8.

Here, the Greek word replaced by 'diligently' refers to astrology and divination; and so this Greek reference, as with the word magos, indicates that they were astrologers.

The idea that the wise men were kings comes probably from the Book of Isaiah, Isaiah being a major prophet of the Old Testament. He was a citizen of Jerusalem who, as a prophet, enjoyed much political influence in the kingdom of Judah from about 747 BC until at least the turn of the century. Isaiah taught that a remnant of the nation of Judah would would survive the overthrow of those who relied on human help rather than God, and he foresaw the coming of a Messiah:

For behold, the darkness shall cover the earth, and gross darkness the people: but the Lord shall arise upon thee, and his glory shall be seen upon thee. And the Gentiles shall come to thy light, and kings to the brightness of thy rising. Isaiah 2:2-3.

In the Eastern church a variety of different names are given for the three wise men, but in the West, since the 8th Century, the names have settled as Caspar (or Gaspar), Melchior and Balthasar2. Various traditions impart further detail to these three. One tradition depicts them as representing different races and stages of life's journey. Thus Caspar, king of Tarsus (India) is young and provides the gift of gold to finance the Holy Family's flight to Egypt. Gold is also symbolic of Christ's immortality and purity. It is also worth noting that gold and silver have been used medicinally for millennia due to their antibacterial properties, and gold may therefore have been proffered for its health-giving properties. Melchior, king of Persia, is middle-aged and provides the gift of myrrh, a fragrant gum which, according to the ancient Israelites, strengthens children. Balthasar, king of Saba (Ethiopia) is elderly and offers the gift of frankincense. This is a resin used in incense for worship and also symbolizes prayer and sacrifice.

Epiphany, (from the Greek epiphania) means 'manifestation', and is one of the chief Christian festivals, the feast marking the day when the Magi saw Christ. The festival was placed by the church to replace the Roman (pagan) festival of Saturnalia.

Traditionally Epiphany was celebrated on 6 January, the 12th day after Christmas, and is also therefore known as 'Twelfth Night'. More recently the Church has moved the date of the festival to the second Sunday after Christmas. The twelve days of Christmas relate to this tradition as being the period of the journey of the Magi.

Using the laws of planetary motion coupled with computer technology, modern-day astronomers are now in a position to 'turn the clock back', as it were, to work out what it was that the Magi actually would have seen 2000 years ago. A major problem is that nobody knows exactly when Jesus was born. The current date of Christmas - 25th December - dates from the 4th Century, probably pragmatically, to coincide with a conglomeration of established pre-Christian pagan mid-winter festivals. Even the year of Christ's birth is in doubt. Although the birth of Christ has been taken as the start of the Christian calendar, mistakes were made when the monk Dionysius Exiguus calculated this dating system in the 6th Century. Thus it has been claimed that Jesus must have been born in 4 BC or earlier, as King Herod, who was clearly alive at his birth, is recorded as dying in that year. This is in contradiction to the Gospel according to St Luke which says:

And it came to pass in those days, that there went out a decree from Caesar Augustus, that all the world should be taxed. (And this taxing was first made when Cyrenius was governor of Syria).Luke 2:1-2

So Joseph and Mary made their way from Nazareth to Bethlehem to be taxed. According to Roman history, such a census did occur, but in 6-7 AD - not in 4 BC!

So, in order to identify the 'Star of Bethlehem', it is necessary to look at astronomical events occurring between 4 BC (or earlier) and 7 AD. Although several phenomena, from a comet to a supernova, have been postulated, David Hughes, Professor of Astronomy at Sheffield University, UK, believes that what the Magi actually would have seen was a rare conjunction of the planets Jupiter and Saturn when the planets came together three times, (in May, September and November 7 BC), three years before the death of King Herod. Due to complicated orbital forces, the planets would have appeared to have been travelling backwards and, on specific days, even stopped. These events would have been predictable by the Magi, giving them time to prepare and plan their journey; and the interval between May and September would have given them time to make the journey.

Relics of the Magi

According to legend, the bones of the Three Wise Men (Magi) were discovered by St Helena of Constantine while on a pilgrimage to Palestine. She is said to have taken the remains to the church of Hagia Sophia (The Church of the Holy Wisdom) in Constantinople. They were later moved by oxcart to Milan by St Eustorgio, Bishop of Milan, in the 5th Century. Nowadays, in a dark recess in the Basilica of St Eustorgio, Milan there is the inscription, SEPVLCRVM TRIVM MAGORVM (Sepulchre of the three Magi), while a carved stone slab nearby is accompanied by a sign proclaiming, 'According to tradition this stone slab with the comet was on top of the Magi's tomb and was brought to Italy along with their relics'.

In 1164, the relics of the Magi were taken from Milan by Holy Roman Emperor Fredrick Barbarossa, and given to the Archbishop of Cologne. Cologne Cathedral now contains a 'Shrine of the Three Kings', which attracts a steady stream of pilgrims.

In 1903/4 some fragments of the bones and garments were returned to the Basilica of Saint Eustorgio in Milan, where they are kept in the Three Kings altar close by the empty Three Kings sarcophagus.

1Zoroastrianism is a religion founded by a Persian prophet, Zoroaster, in the 6th Century BC.2Although none of these names are particularly Persian, some argue that Caspar and Gaspar are corruptions of 'Jaspar' which is the Persian for 'Keeper of the Treasure'.