Christmas in Lebanon: The Nativity Crib Content from the guide to life, the universe and everything 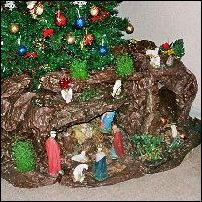 Christmas in Lebanon is not an image that forms easily in most people's minds. It seems difficult to equate Middle Eastern or Arab nations with Christianity, despite the fact that many of the Arab Christian communities date from the first century. The essence of any happy religious ritual in Lebanon is the home. Family, food, festivities and fun are at the centre of the drama and excitement.

The crib1 is the physical representation of the Nativity scene - showing the image of the day Jesus was born. Tradition dictates that the infant Jesus was swaddled and laid in a manger instead of a cradle, that Mary and Joseph watched over him and the farm animals warmed him with their breath. A shepherd boy is also reputed to have led in the kings who followed the star to Bethlehem bearing their gifts of frankincense, gold and myrrh. In many Christian cultures and traditions, a crib is placed beneath or alongside the tree at Christmas. The figures are often made of porcelain or wood and are available in all sizes, depending on fashion, purse and space available.

Unlike Christmas in the West, the Christmas tree is not so important in Lebanon. It has crept in but has a more commercial feel that many people reject. Recreating the scene of Jesus's birth within the home is still considered to confer a blessing on the home and family, and many Lebanese Christians adhere to this tradition wholeheartedly.

On the first of December, the crib is finally assembled. This is a job for the whole family that takes much planning and forethought, design and cunning.

The crib is normally set up in the formal sitting room. This is usually a dusty, cold room that comes to life exclusively to entertain guests. A whole corner of this room is cleared of furniture and a skeleton shape of wooden crates is carefully arranged. Over this shape, a specially-made paper2 is unrolled, draped and pressed around the crates. An alternative preferred by many is to use rough jute sacking. This, of course, is to set the scene. You step away when done and instantly you see a cave in a mountainside.

For many years, the use of a cave in the Lebanese nativity scene was questioned and queried for its authenticity. Many people argued that as Jesus was born in a stable, then a stable should be used. However, the tradition of using the cave scene is shrouded in the mists of time. It is an old tradition with little documentation as to its origin and many adhered to the old way despite the criticism. Only recently, the BBC aired a programme called Son of God. In it there is evidence presented that, in fact, Jesus was born in a cave, and not a stable.

Next comes the greenery: for weeks beforehand, the house would have been covered - windowsill to windowsill - with wet cotton wool sprouting beans and seeds: chickpeas, broadbeans, lentils, oats and wheat. This indoor Christmas jungle is sprouted in stages so there is a veritable forest of different heights to work into the design. These are placed in nooks and crannies around the mountainside among the figures of young children, sheep, goats and donkeys.

One memorable year, in one particular crêche scene at a restaurant in Antelias, the lady owner of the restaurant recreated a whole mountain village scene. Again, the family is traditionally involved with every stage of development so she and her husband, with their sons and daughters, built little wooden homes, a tannour (an outdoor clay bread oven), a grinding mill complete with donkey, tiny wooden farm animals and shelters, a farmer and his wife, playing children, scrabbling chickens, and so on. The shelters and homes were made by her sons and her daughters had fashioned and dressed figures made from twigs and nuts. She then used gathered sticks, twigs, stones and flour to perfect effect in completing the detail of the scene. As an added source of visual delight, she had sprouted some seeds in pine cones which open when watered and close as they dry out. The attention to detail can be stunning.

Above the cave there is always an image of the archangel Gabriel and just outside, one of the kings, waits his turn to visit baby Jesus. Inside is a dark-haired and serene Mary, a protective Joseph and a young shepherd boy leading the kings in to offer their gifts to the blessed infant.

If there is a 'tree', it is often a fir tree branch, scarcely decorated but topped with a star. If there is no tree, this guiding star is placed above the scene, on a wall or even hung from the ceiling.

An Occasion for Prayer

The Nativity scene is traditionally used as a shrine within the home and is the place for prayer - especially of the rosary. On the night before Epiphany (6 January), the Maronite3 tradition dictates that Jesus passes at midnight and blesses the homes of the faithful. A dough is hand-kneaded by the matriarch of the household with new flour, olive oil, salt and water and fashioned into a little container around a new coin. This is hung from a tree near the front door overnight. At midnight, the family gathers around the crêche to pray the Rosary.

On Epiphany, the coins and dough are taken down and kept as talismans and the crêche is dismantled and put away for the next 11 months.

1Also known as a crêche.2A bit like brown wrapping paper with paint splattered all over it.3Roman Catholic eastern rite following the teachings of the 4th Century hermit, Maroun.