The Holy Rosary Content from the guide to life, the universe and everything 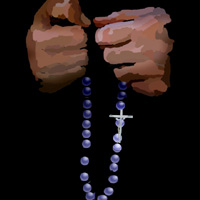 The Holy Rosary is a form of prayer that consists of a number of 'decades' - or ten 'Hail Mary' prayers with an 'Our Father' in between. During each decade, we meditate on one of the Mysteries of the Rosary. In the Roman Catholic Church the practice is usually completed with the aid of rosary beads, a loop of 60 beads used to count the prayers as they are said. To 'say the rosary' is to complete a full cycle of the beads with the initial and final prayers. It's often said that a rosary is a sign of devotion, though non-believers and cynics might view it as a sign of someone with too much time on their hands.

History of the Rosary

The name rosary comes from the Latin roserius meaning garland of roses. Early Christian artefacts of the 4th Century resembling cribbage boards have been unearthed, and are said to be devices for counting prayers. Monks of the Eastern Rite churches use knotted ropes to count devotional prayers. The use of beads is not unique to Christianity. St Francis Xavier reported they were astonished to see rosaries being employed by the Buddhists of Japan, while Muslims have for centuries employed beads or Tasbih to count the devotional names of Allah.

There are various explanations as to where the current Catholic Rosary tradition stems from. Some have suggested that the rosary is a gift from Our Lady1; others have suggested that the tradition only goes as far back as the 14th Century. However most sources seem to suggest the current format of the rosary is a culmination of various traditions stretching back thousands of years. The widely accepted origin links the Marian Psalter or the Rosary with the psalm-singing of the early church. Those who could not read the psalms were instructed to instead say 150 'Our Father's and 'Hail Mary's.

St Dominic de Guzman popularised the Marian Psalter in the form we have it today (150 'Hail Mary's, with each tenth 'Hail Mary' followed by one 'Our Father') when Our Lady encouraged him to pray it that way in response to the Albigensian heresy. This association is why the Rosary is known as the 'Dominican Rosary', and is the method outlined bellow. Our Lady also appeared to the children at Fatima and asked that the Rosary be prayed daily, including the 'Fatima Prayer', as part of what must be done in order to prevent Russia from spreading its errors throughout the world.

The Prayers of the Rosary

I believe in God, the Father Almighty, Creator of Heaven and Earth.
I believe in Jesus Christ, His only Son, our Lord.
He was conceived by the power of the Holy Spirit and was born of the Virgin Mary.
He suffered under Pontius Pilate, was crucified, died, and was buried.
He descended to the dead. On the third day He rose again.
He ascended into Heaven, and is seated at the right hand of the Father.
He will come again to judge the living and the dead.
I believe in the Holy Spirit, the Holy Catholic Church, the Communion of Saints, the forgiveness of sins, the resurrection of the body, and life everlasting.
Amen.

Our Father, Who art in Heaven; hallowed be Thy name;
Thy kingdom come; Thy will be done on earth as it is in Heaven.
Give us this day our daily bread;
And forgive us our trespasses as we forgive those who trespass against us, and lead us not into temptation;
But deliver us from evil.
Amen.

Hail Mary, full of grace, the Lord is with thee
Blessed art thou among women, and blessed is the fruit of thy womb, Jesus.
Holy Mary, Mother of God, pray for us sinners, now and at the hour of our death.
Amen.

Glory be to the Father, and to the Son, and to the Holy Spirit,
As it was in the beginning, is now, and ever shall be,
World without end.
Amen.

O my Jesus, forgive us our sins, save us from the fires of hell, and lead all souls to heaven, especially those in most need of Thy mercy.

Hail, Holy Queen, Mother of mercy, our life, our sweetness and our hope.
To thee do we cry, poor banished children of Eve.
To thee do we send up our sighs, mourning and weeping in this valley of tears.
Turn then, most gracious advocate, thine eyes of mercy towards us.
And after this our exile, show unto us the blessed Fruit of thy womb, Jesus.
O clement, O loving, O sweet Virgin Mary.
Pray for us, O holy Mother of God.
That we may be made worthy of the promises of Christ.
Amen

The Mysteries of the Rosary

(Said on Mondays, Saturdays, Sundays of Advent, and Sundays from Epiphany until Lent)

The Luminous Mysteries (Said on Thursdays throughout the year) was introduced by St Paul II in response to the call of Pope John VI for a renewal in Marian Devotion.

Said on Tuesdays, Fridays, and daily from Ash Wednesday until Easter Sunday

There is no prescribed time or place to say the Rosary and this combined with the portability of Rosary beads has been a factor in the popularity of this form of prayer in Catholic and other traditions. Commonly the Rosary is said as part of a daily devotion that may take place within a community group. Some choose to say the Rosary before receiving the Sacraments, notably the Sacrament of Reconciliation. It may be said when a loved one dies, is in need, or ill. It can be said as an offering or thanksgiving. However the Rosary is not part of the Catholic Mass, despite the depictions of the popular media.

How to say the traditional Rosary is outlined below:

The Beads and other Denominations

Rosary beads come in a variety of shapes and sizes, and in materials ranging from crystal to plastic. More commonly they are 55 beads arranged in a loop connected by a medal depicting the Sacred Heart of Mary. From this drops five further beads and crucifix.

Although references to Mary were all but dropped from the liturgy and doctrine of the Protestant churches during the Reformation, there has been a recent renewal in Marian devotion among some Protestant denominations. As a result, the Rosary in both the Dominican and an Ecumenical form is becoming more commonly practiced by members of these churches.

1Mary, Mother of Jesus Christ.2Meditation is just one way that the mysteries can be observed after each decade. Some people choose to read the scripture associated with each mystery at this point, others may use prayer cards or pictures to help them understand the Mystery.3Neither the Creed nor the Hail Holy Queen are actually part of the Rosary and may be omitted.