Perfume Content from the guide to life, the universe and everything 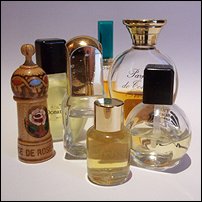 Perfume: from the Latin phrase per fumum meaning through the smoke. The phrase was later adopted by the French as parfum to describe the sweet smell of incense drifting through the air.

Every day millions of people splash or spray perfume in some form or other, but they seldom give thought to its long and very illustrious past. Since the Mesopotamians first discovered incense around 4,000 years ago to massage their olfactory system1, our love affair with fragrance has developed to a multi-billion pound international industry.

The Dim and Distant Past

The ancient civilisations burned aromatic woods, resins and incense as part of mystic and religious ceremonies. Egyptian Pharaoh Hatshepsup popularised the use of such scents during burials and rites, and led expeditions to find new and more interesting fragrances around 3000 BC. The Egyptians were renowned for packing the tombs of their dead with valuables for use in the afterlife, and incense was one of their most treasured possessions. At the opening of King Tutankahmun's tomb some 3,000 jars of perfume were found, and even 3,000 years since they had seen the light of day - they retained their fragrance. Egyptians were also fastidious about their personal hygiene and enjoyed relaxing in their baths. They were under order to take at least one scented bath per week since it was thought this would protect the skin against the drying effect of the sun and the arid conditions.

The Bible makes frequent mention of fragrance. The most notable is in the New Testament, where the gifts of frankincense and myrrh are presented by the Magi for the newborn Jesus. However, even in the Old Testament perfume was an important commodity, as can be evidenced by God's instructions to Moses:

And the Lord said unto Moses, Take unto thee sweet spices, stacte, and onycha, and galbanum; these sweet spices with pure frankincense: of each shall there be a like weight: And thou shalt make it a perfume...
- Exodus Chapter 30 V 34 and 35.

A recipe for the most holy perfume, if you like, but not for common usage. The scriptures go on to specify this particular perfume is only for the Lord, and it was indeed a capital crime to make it for personal use2.

The Greeks were also renowned for their love of perfume, and perfume shops were regular meeting places for the citizens prior to their daily bath. Indeed, the Greeks are credited with the invention of the first liquid perfumes consisting of heavy oils mixed with powdered fragrances. These oils were stored in elongated gold and glass bottles known as alabastrums. Later the carrier oils such as olive oil and almond oil were mixed with essential oils from lilies, roses, anise and orris root to please the senses.

The process of extracting the essential oils from plants was discovered by an Arabian doctor, Avicenna3 - who first extracted rose oil. Prior to his experiments all liquid perfume was made from mixing oils with crushed petals or herbs, which made for some very 'heavy' fragrances. Rose water proved to be a great success and opened the floodgates for the extraction of other essential oils for perfumes.

The Romans were also famous for their love of the bath, and to this end they had an unctuarium which was a shelved room, to house the unguents, oils and essences required to luxuriate in style. Not entirely satisfied with making themselves smell sweet three times daily, the Romans also perfumed their dogs and horses. In a novel way to spread scent during festivities, they released perfume-covered birds to disperse the scents, sort of the earliest air freshener.

In England perfume came to the fore during the reign of Queen Elizabeth I, since her delicate nose could not tolerate the smells of the day. Billy Connolly once said that the current Queen thinks the world smells of paint, because everywhere she goes there is some bloke with a paintbrush touching the place up just in front of her. On the same basis Queen Elizabeth I lived in a perfumed world where her staff would travel before her spreading sweet scents.

With the establishment in France of the Guild of Glove and Perfume-Makers in 1656, the popularity of the perfumed glove was assured. Yes, perfume was so essential to bury other more earthy smells that perfumed gloves became a must-have for the aristocracy. In the 18th Century La Cour Parfumée4 of Louis XV and Madame de Pompadour lavishly spent perfume on clothes, fans, furniture - and even allowed it to replace soap and water for washing.

Perfume came in many variations from the most concentrated, (usually 20 - 25% essential oils), to eau-de-cologne (with a concentration of only 5%). Eau-de-cologne originated in Italy and was first marketed by the barber Gian Paolo Feminis. He moved to Köln, in Germany, and sold the first perfumed water,   Aqua Admirabilis, in 1709. It was made from grape spirits, oil of neroli, bergamot, lavender and rosemary, and was marketed as a cure-all for ailments such as stomach aches or gingivitis (bleeding gums). The French were swift to pick up on the popularity and named it Cologne - their own pronunciation of the town of Köln. The first colognes were not for wearing as fragrance, but for drinking.

Napoleon was another lover of fine perfume and supposedly went through two quarts of violet cologne per week; add to that the 60 bottles of double-extract jasmine every month and you get the picture of a very fragrant little Emperor. Josephine had a taste for stronger perfumes, and was particularly fond of musk. It was rumoured that even 60 years after her death, the smell of musk still lingered in her boudoir.

By all accounts perfumes were, in those days, used to mask smells rather than to enhance.

By the turn of the 20th Century bathing was making a come-back and perfumes were on the increase again, with the single fragrances of lily-of-the-valley, violet, lilac and rose being particularly popular. By around 1910, compounds which could effectively bind the fragrances together were introduced, and perfumes were evolving to what they have become today.

The Sweet Smell of Success

Paris, with its rich perfume history, soon became the world centre for the industry, and the major perfume houses were based there. Before long, the bottles became almost as important as the contents. François Coty was the first to recognise the importance of the bottle, and quickly formed a partnership with one René Lalique. The Lalique perfume bottles went on to house the fragrances of many leading perfume makers. The Baccarat and the Brosse glass-makers soon followed, and a whole new facet of the perfume industry was introduced.

In recent times, even jewellers have become involved in the perfume trade by selling their own fragrances. The market for their exquisite bottles has grown, and many collections begin with the purchase of a single designer bottle of perfume.

Celebrities have also jumped onto the fragrance bandwagon, with perfumes from Elizabeth Taylor, Kylie and the Beckhams to name a few. Their scents are generally selected by the celebrity from a range of pre-prepared fragrances supplied by an established perfume house. The celebrity will select their favourite fragrance and perhaps suggest some minor changes that they feel befits their personality. Their adoring public will then ensure a commercial success for both the celebrity and the perfume house.

France now produces around 30% of the world's perfume, soundly beating Germany into second place with only 14%, and the USA finishing third with a mere 12%.

If Music be the Food of Love - Pick a Perfume!

The modern perfumier has a choice of some 3,000 ingredients, including around 50 completely synthetic chemicals. The average perfume consists of at least 50 of these elements. The elements are grouped into 14 distinctive odour families, which are then split into a further three categories, known as notes. The notes used to create the perfect perfume come from these three categories and are blended with three basic rules in mind:

The skill of the perfumier is to select and blend these notes to make the beautiful music that becomes the perfume we will all want to buy.

A Nose for It

The nose did not evolve solely to prop up our spectacles; it is a very complex feature. The human olfactory surface would cover about the size of a postage stamp, whereas an average sheepdog's would need the size of a handkerchief. The human olfactory membrane has over ten million receptors of twenty basic types, which can differentiate some 10,000 different smells. Pretty amazing really, but if you can't tell the difference between your tea and coffee until you taste it, you could be anosmic - lacking a sense of smell.

ICI have commissioned some research into the subject of the senses, and the conclusions appear to be that the senses are as important today as they ever were for our total life experience of emotions and memories. Smell, in particular, can evoke strong memories: mothballs may remind us of Granny's wardrobe; freshly-cut grass, the long hot summers of our youth; and nutmeg of cold winter evenings. At the most basic level, a smell can be used by a baby to identify its mother.

The perfume industry, like any other, is driven by the lure of massive profit-potential, but unlike most others5, is led by the nose. To be a perfumier, an extremely sensitive, sharp sense of smell is the most important asset. The creators of perfumes are known as 'noses', and they have the final say in whether a perfume goes into production or not. A 'nose' will usually serve at least a six year apprenticeship, and may never make the grade. The initial test requires them to be able to identify the scents of various petals while blindfolded. They must then train to recognise the components of more elaborate fragrances. The end result being that they can identify perhaps one hundred ingredients of a perfume and the precise quantity of each component in the mix. No mean feat.

Having established that the 'nose' is perfectly tuned, they may then go on to blend their own perfumes using mouillettes6 and a myriad of precious oils.

The 'nose' has recently been immortalised in the novel Perfume: The Story of a Murderer by Patrick Süskind, which is a fictional account of a perfumier murdering to create the perfect perfume. The movie of the novel, also called Perfume and starring Ben Whishaw, should not be confused with the real life of the average perfumier.

1This is the part of your nose that deciphers smells.2If you are considering making this perfume perhaps you should bear this in mind.3Otherwise known as Abu 'Ali al-Husayn ibn' Abd Allah ibn Sina, born in Iran in 980 and died in 1037. Avicenna was the most famous philosopher and scientist of Islam.4The Perfumed Court.5Other industries which employ the services of 'noses' are tea and coffee blending, and wine.6Strips of a type of blotting paper which are dipped into various essential oils and fragrances to produce the desired scent.