Leeches Content from the guide to life, the universe and everything 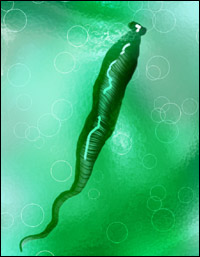 The idea of leeches sucking your blood may be as disconcerting as having maggots eat dead flesh from a wound. The leech, however, is a fascinating creature, and although most famous for sucking the blood of its hosts, there is more to them than this not entirely accurate image.

To put leeches in context, they are a type of segmented worm - like earthworms, although leeches tend to be more like a flattened pear shape, with the mouth at the thin end. All segmented worms are in the phylum Annelida1, and they are divided into three classes: the polychaetes (marine worms such as bristleworms), the oligochaetes (earthworms and other freshwater worms) and the hirudineans (leeches).

While broadly similar to earthworms, a true leech2 differs by having a consistent number of segments3, each of which is always divided into two or more rings (annuli), and by having a sucker at both ends of its body that it can use to move, rather than the bristles of other annelids. Many of the aquatic leeches can also swim in a similar manner to eels.

Leeches, like earthworms, are hermaphrodites4, but the reproductive systems vary between the different families of leeches. Leeches have internal fertilisation systems: most mating is achieved by the implantation of a 'spermatophore' (sperm package) into their partner. This implantation can by done either via a protrusible penis or by the hypodermic implantation of the spermatophore into the body of the partner. The sperm are then transported to the eggs where fertilisation occurs, and cocoons are formed. While many leeches leave the cocoons to develop by themselves, in the leech family Glossiphoniidae, most species have the cocoons attached directly to the parent. This allows the parent to protect and care for the young as they develop. This includes providing food (prey) for the young leeches after they hatch.

All leeches are carnivorous invertebrates5, though they are not all parasitic bloodsuckers. There are at least 700 species worldwide, filling a number of predatory niches in aquatic (or at least moist) environments. They require dampness because their thin skin and lack of internal organs means that they find it almost impossible to control water loss, either by dehydration or osmosis. Many species of leech wait for the prey to come to them and subsist on other invertebrates such as earthworms, insects, pond snails and freshwater clams. These leeches are either ones that swallow their prey whole, or ones that spear the prey with an extendable tube which is then used to suck their victim's juices out.

The other species of leeches comprise the bloodsucking varieties, some still using the hollow spear-like proboscis, but most having two or three sets of jaws with which to attach themselves to their larger hosts as an external parasite. The jaws resemble curved saw-blades with tiny extremely sharp teeth making either a V- or Y-shaped bite (depending on the number of jaws).

Leech use through the ages

Leeches have been used for centuries – possibly since the Stone Age - though modern medicine has outgrown the early rationales for their use. One explanation for blood-letting was that disease was caused by evil spirits, and that these could be removed with the bad blood. There is evidence leeches were used by the Egyptians as long ago as 1500BC. There are further references to medicinal blood-letting in Arabic, Sanskrit, Persian, Greek and Chinese literature. European medical thought was influenced by Galen, physician to Roman Emperor Marcus Aurelius in the 2nd Century AD. Galen advocated blood-letting as part of his medical theory of the four temperaments (sanguine, phlegmatic, choleric and melancholic) that diseases resulted from the imbalance of what Hippocrates identified as the four humours of the body (blood, phlegm, black and yellow bile).

Most uses are medical and based on the leech's ability to consume blood, but one bizarre use, of questionable effectiveness, was the Tempest Prognosticator - using the response of leeches to changes in atmospheric conditions in order to predict storms.

Leech For The Weekend Sir?

The medical use of leeches for blood-letting was prevalent in Europe and America in the 18th to mid-19th Century, particularly in France (millions were used each year in Paris alone) and was often associated with Barber Surgeons. The species used for blood-letting was (and is) usually the freshwater leech Hirudo medicinalis.

Blood-letting fell out of favour after the 1830s when experiments revealed that it wasn't an effective treatment for most diseases. The leech removed blood and left a wound that continued to bleed for some time - this did not cure the patient. However, the 1884 discovery that blood did not clot in leeches' stomachs eventually led to the identification of the effective anti-coagulant enzyme hirudin in the 1950s. This leech by-product has become widely used. Leeches themselves are also still used today because of their ability to significantly aid recovery of blood circulation following surgery.

Some surgery - for instance, the reattachment of a severed finger - can require the blood flow to be re-established. This is done by reconnecting the major arteries and veins. Veins, however, can be difficult to find and connect. If not enough are reconnected, the blood may initially enter the reattached part but not be able to exit. This stops fresh, oxygenated blood entering and the reattachment procedure will fail. Leeches can assist here. If applied to the damaged tissue they can both actively suck out excess blood and also secrete in their saliva: hirudin, which prevents coagulation; a vaso-dilator causing a widening of blood vessels in the dermis encouraging blood flow to the area; a form of histamine, encouraging the capillaries to become leaky; and an anaesthetic so that the host doesn't feel their jaws slicing through the skin to expose the blood vessels beneath. Together these prevent the tissue from dying off, allowing the body to re-establish good blood flow in the damaged area in a few days.

Leeches are also familiar to people who have travelled through wet tropical jungles and swamps and have emerged with uninvited leeches dangling from their flesh. How did the leeches find their prey? Leeches do have eyes (between two and ten) as well as photo-receptive cells scattered over their bodies, but these are pretty basic and unlikely to differentiate more than changes in intensity of light and maybe some movement. Leeches tend to be nocturnal and shun bright light. More unusual sense organs can allow some leeches to locate prey by detecting vibrations (such as movement through water), by smell (following a chemical gradient toward the prey) or even by passive sonar. Bloodsucking leeches tend to be alerted by sensing movement and then home in on the carbon dioxide exhaled by the prey.

One incident that may make you think twice before drinking unfiltered water was the decimating effect leeches apparently had on the soldiers of one of Napoleon's armies in the Syrian desert in 1799. Allegedly, the soldiers drank water containing leeches. These attached themselves to the insides of the soldier's noses, mouths and throats, engorged themselves on blood, and caused some soldiers to die of suffocation; others by loss of blood. Although the story is anecdotal the risk is genuine, and if you can't remove them by gargling with alcohol or hydrogen peroxide it may be necessary to puncture an engorged leech with a sharp object.

What to Do if a Leech is Attached to You

Don't panic. Trying to remove a leech by burning it with a lit cigarette, applying salt, shampoo or insect repellent or just pulling at it, may cause the leech to regurgitate its meal and leave an infected wound much worse than the one the leech alone would have left.

Usually leeches will drop off easily by themselves when they have consumed a meal6. If you can't wait, leeches can be removed using a fingernail to push the anterior sucker (where its mouth is) aside (the one at the thin end of the leech), and then doing the same with the posterior sucker (at the fat end of the leech), being careful not to let it reattach itself. If you are in good health and keep the wound clean7 you will be unlikely to suffer any ill effects from the leech. It is possible to be made unwell by the symbiotic bacteria in the leech's gut: possible complications being wound infections, diarrhoea or septicaemia. This can be avoided by using pre-emptive antibiotics for deliberate medicinal use of leeches.

Leech information can be found in various places:

1Annelid: segmented worm, each segment being a ring shape or annulus.2Technically the Euhirudinea. Some of the hirudineans while classified as leeches don't share all the other defining features, such as 32 posterior segments. For instance the family of Acanthobdellida have bristles (chaetae) and 29 segments, while the Branchiobdellida lack bristles but only have 15 or 16 segments.3True leeches always have 34 segments, two anterior and 32 posterior ones.4Hermaphrodites have both male and female reproductive organs.5Creatures that feed off other animals but have no backbone. Incidentally, the word 'invertebrate' was coined by the French biologist Jean-Baptiste Lamarck.6A single feeding event can be up to five times its own bodyweight in the case of medicinal leeches and it can take six months before the leech needs to feed again.7A leech wound may continue to bleed for up to 18 hours due to the anti-coagulant in the leech saliva, and in tropical climates minor injuries easily become infected.8Biopharm's logo is of a medicinal leech bite, looking very similar to the Mercedes Benz car logo.