Medical Maggots Content from the guide to life, the universe and everything 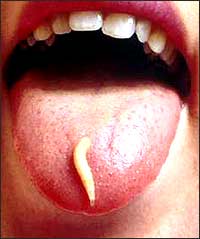 Over the centuries medicine has come a long way. What one finds nowadays, though, is that some of the things that were seen as primitive and disgusting in previous generations are now being recognised as powerful and useful tools.

In days gone by, healers used to use maggots to deal with flesh which was infected. The maggots ate away the dead and rotting flesh of the patient and eventually the patient had a sore, but healthy wound.

On a TV documentary about a man lost in the Australian bush the audience were informed that he had injured his leg in the plane crash and was very concerned that gangrene would set in and finish him off. Flies laid their eggs on the wound and soon the little maggots were feasting on the bloke's infected knee. As he was very weak he was unable to prevent this happening. He then went on to confess that this infestation probably saved his life.

In recent news items it has been revealed that modern medics are using maggots for exactly this purpose. And you probably thought their only purpose was for catching fish.

This is currently one of the medical nightmares of modern hospitals. MRSA (methicillin resistant staphylococcus aureus) is a superbug that doesn't respond to the standard treatments. However, in 1999 Dr Steve Thomas of Princess of Wales Hospital in Bridgend, Wales found that his maggots got stuck into an MRSA infected wound and within 48 hours the wound was MRSA negative and was healing well.

Will Any Maggots Do?

It seems you do need to be fussy about your selection of larvae (maggots). The Greenbottle Blowfly Larvae are the bees knees when it comes to converting rotting dead flesh to juicy fat maggots.