Orchestral Percussion - the Kitchen Sink Department Content from the guide to life, the universe and everything 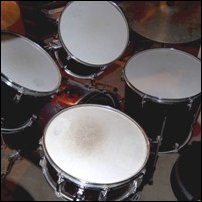 The Percussion section of the orchestra consists of all the instruments that you hit or shake to make a sound. There is a huge number of different instruments including drums, bells, gongs and even xylophones, earning it the title 'The Kitchen Sink Department', because everything except the kitchen sink is included.

There are many jokes about the triangle player who gets paid for a night's work when he plays a single note on the triangle. In fact, the typical percussionist has a very busy job: he or she may need to play as many as ten different instruments in a single performance. Since many of the instruments are large, the player must go to the instrument, being allowed to walk around during performances. If it is not physically possible to play all the instruments, additional players will be required. Some 20th Century pieces of music require as many as five percussionists.

The percussionist must have a good knowledge of music. Some instruments such as the xylophone are capable of playing tunes, so the percussionist must be able to read music notes. All percussion instruments require a very good sense of rhythm and knowledge of how it is written down. While a rock drummer gets by with a few basic rhythms, ad-libbing drum rolls and so on where appropriate, an orchestral player must play exactly what the composer wrote down.

The percussionist also needs to keep quiet for long periods when no percussion is required. Players are expert at counting bars (the musical measure of time) so that they can sit twiddling their thumbs but still come in at the right place. Legend has it that one percussionist left the stage during a performance, kept counting bars in his head while he attended the birth of his child in the hospital across the road, then came back on time with a drum roll at the end of the symphony.

The rest of this entry outlines some of the major percussion instruments in the orchestra.

The Timpani, also known as the kettle drums, are big round-based drums. A single one is called a timpanum, but this word is never used because they always come in sets or two, three or four. These drums are struck with a stick with a padded head, giving a deep, rounded sound. Timpani play definite notes, so they must be tuned. Each drum can produce a few different notes: they have foot pedals which change the tension in the drum head, changing the note produced. Timpani are required in so many orchestral pieces that the timpani player normally specialises in this instrument alone, not playing anything else. The player spends most of his or her spare time tuning the drums and will be seen lying across the drum at the back of the orchestra, trying to tune it quietly without interrupting the music. The best place to hear timpani is in Carl Nielsen's Fourth Symphony where two full sets of timpani attempt to drown out the entire orchestra.

This is a small two-sided drum. It is small enough to be carried but is normally mounted on a stand. There is a metal rattle called a snare inside it which vibrates very loudly against the lower drum head. The drum is struck with a hard-ended stick. For a slightly less intrusive sound, the snare can be disconnected, in which case this is called a Side Drum. To see a Snare Drum in action, watch a performance of Ravel's Bolero. The snare drummer has to beat out an unvarying rhythm, getting louder and louder, for a full 15 minutes.

The bass drum is enormous - about four feet across - and is played with a huge padded hammer. It produces a loud, dead thump which is like being punched in the stomach. This is used to great effect in the 'Dies Irae' in Verdi's Requiem.

The cymbals are two flat metal plates held in the hands and crashed together. This can be used to produce one of the loudest, most shocking sounds of the orchestra. Little old ladies have been seen to jump up to six inches out of their seats at the cymbal crash at the start of the last movement of Mahler's First Symphony.

If a cymbal crash is to be cut short, the player jams the cymbals into his or her armpits, making a well-padded jacket essential. A single cymbal can also be played by hitting it with a stick.

In Beethoven's day, the cymbals had just been introduced into Vienna from the East. Along with the triangle, they were considered to be characteristically Turkish. It became popular to include 'Turkish marches' with cymbals and triangles in compositions; Beethoven put one into the final movement of his 9th Symphony.

The xylophone consists of an array of hard wooden blocks of different sizes which are struck with two hard-ended sticks. The blocks are arranged like a piano keyboard, so that tunes can be played in any key. Saint-Saëns uses the xylophone for the dancing skeletons in his Danse Macabre.

This is like a metal xylophone. The sound is like a load of tiny bells, and is very clear and simple. It is used for ethereal sounds in Holst's The Planets.

Tubular bells are hanging metal tubes of different lengths which are struck near the top with a padded hammer. Tunes can be played on them, but they are rarely used for more than short phrases. Mahler uses tubular bells in his 6th Symphony to represent the cowbells of the Austrian countryside.

The Tam-tam is an enormous gong. The sound it produces is best described as 'bwash'. You can hear it in Stravinsky's The Rite of Spring.

The tambourine is an instrument designed to be held in one hand and shaken, or bashed with the other. Some tambourines have a membrane across the frame like a small flat drum. Others have just the frame, without the drumhead. They all have loose disks or enclosed bells attached to the frame, which jingle when shook. This instrument is heard in lots of early Motown records as Jack Ashford of the Motown backing band the Funk Brothers rarely appeared at a recording session without his tambourine. Buskers and clowns use tambourines to entertain crowds as much to create music. There are songs dedicated to the instrument, such as 'Mr Tambourine Man' (a Number One hit for The Byrds in 1965) and 'Green Tambourine' by the Lemon Pipers.

This is a simple bar of metal bent into a triangle and hung from a string. When hit by a metal striker, it makes a jangling sound. See the cymbals for an example of its use in the 'Turkish March'.

These are shallow wooden cups which are clapped together. They are sometimes used in Spanish music. The castanets in the orchestra are hinged, with a handle attached to one, making them easier to handle than the loose Spanish type used by flamenco dancers.

A block of wood struck with a stick producing a sharp 'tok tok' sound.

The whip is a small device made of wood and leather which makes a cracking sound similar to that of a horse-rider's whip without the need to wave it around and injure other members of the orchestra.

These are African drums, played as a pair, by striking the drum heads with the hands.

Two cylindrical hardwood sticks are struck together, providing a clacking rhythm. These are popular in Latin American music.

The obligatory Christmas rendition of Prokofiev's  Troika Sleigh Ride uses Sleigh Bells. These tiny bells are mounted on a stick and jangled.

Although Mahler used tubular bells in his 6th Symphony to represent cowbells, he went one step further in his 7th Symphony, bringing the cowbells themselves onto the stage.

Another Mahler peculiarity, an enormous wooden hammer is used to strike the ground in his 6th Symphony. This hammer is about 5 feet long. It is said to represent nails being driven into a coffin.

Both Wagner and Verdi have Anvil Choruses in their operas, where the singers must strike anvils while singing. In one recording of Wagner's Das Rheingold, as many as 18 anvils were used.