Harpsichords Content from the guide to life, the universe and everything 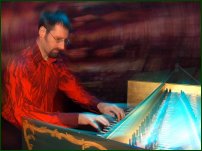 Several otherwise discerning musicians have harboured hostile feelings2 towards the harpsichord since its re-introduction after a fallow period in the 19th Century. However, its place at the centre of nearly all Baroque ensembles, and its enormously rich solo literature, have ensured its healthy survival for the foreseeable future.

The harpsichord can be described as a mechanised harp or, more accurately, psaltery3. Wire strings, originally of brass4, are stretched across a wooden frame shaped to the harmonic curve5. Each string is sounded by a plectrum, mounted on a smooth stick called a 'jack' which rises vertically, guided through a slot, when a key on the keyboard is pressed. The plectra were originally quills, such as were used on the medieval psaltery and lute; mostly now they are made of synthetic material.

The notes produced are clear and can have a very carrying tone. In the 18th Century the harpsichord was often voiced with very tough quills, so that its sound could penetrate the largest orchestra; the keys were sometimes so hard to depress that an unpractised hand could scarcely play it at all6. Normally the harpsichordist would be the director of the ensemble, and would play from the same line of music as the bass instrument of the group, filling the harmony either with the help of figures written below the notes, or by reading from a full score, or both. Fully written-out harpsichord parts for Baroque ensemble music, such as in Bach's Sonatas, are the exception.

The term 'Italian harpsichord' commonly denotes the earliest model: a smallish instrument with one keyboard and two sets of strings. Two jacks stand on each key, their plectra facing in opposite directions, one plucking a string to the left, the other plucking a string to the right, tuned to the same pitch. The jacks can be disengaged by sliding one whole set sideways, away from contact with the strings, but it seems that historically this was only done while tuning the instrument; both sets of strings would normally be left 'on' while playing.

The larger 'Flemish harpsichord' has two keyboards, or manuals, stepped up like an organ's. Generally there are three sets of strings and jacks: one for the lower manual, one for the upper, and one set that can be operated by either manual. One set of strings is tuned an octave higher than the other two sets, and called a 'four-foot stop' after organ usage7. Any set of jacks can be engaged or disengaged, the manuals can be coupled and uncoupled, and varieties of sound and volume can be chosen by combining these different 'registers', as well as by using devices such as the 'buff stop' which slightly muffles the strings, or the 'lute stop' which engages an extra set of jacks to pluck the strings very close to the nut8. This stop was often mechanised in such a way as to prevent the normal register of jacks (further along the string) from plucking at the same time. One registration would normally be chosen for a whole movement of a piece, but variety could be added by changing from one keyboard to the other. Solo pieces such as Bach's Goldberg Variations and an entire genre of French pieces—'Pièces Croisées'—make use of the independence of one hand per keyboard, each roaming freely between treble and bass9.

The two-manual harpsichord is called the 'Flemish' or 'Ruckers' model after its most famous developer, Andreas Ruckers of Antwerp; French and English makers generally followed his lead, while developing their own refinements.

The first harpsichords, as described in and around the 15th Century, and seen in surviving examples from the early 16th, were single-manual jobs and often quite small. One distinct variety was the 'virginals', perhaps so called on account of being suitable for young ladies to play at home; a set or 'pair' of virginals was a small rectangular harpsichord whose jacks came up through holes in the soundboard, giving it a pleasant clucking sound. A 'spinet' is a small single-manual, single-register harpsichord with its strings set at an angle to the keyboard; by contrast the Italian or Flemish harpsichord's strings run (like tracks) straight ahead of the player, and the virginals' run straight across from left to right.

Because of the way in which the sound is produced, a harpsichordist cannot shape musical phrases by swelling or diminishing the sound of successive notes. Each time a key is pressed, it will produce a note of more or less the same volume. Instead, phrasing is done by varying the details of touch and timing: notes can be distinguished by making them longer or shorter than their neighbours, chords can either be spread or attacked crisply, and notes can be sounded slightly early or late (creating the 'agogic accent'). With sensitive playing a surprising range of articulation can be achieved; the music of François Couperin and J S Bach, among many others, invites performers to a seemingly unending exploration of the harpsichord's expressive power.

Music for the Harpsichord

Three of the top composers for the harpsichord were exact contemporaries: François Couperin (1668 - 1733), Domenico Scarlatti (1685 - 1757) and J S Bach (1685 - 1750). Apart from the Goldberg Variations, an astonishing compositional tour de force, Bach wrote Preludes and Fugues, Suites, Sonatas, Inventions, and Concertos for the harpsichord10. He also wrote wonderful fully-composed harpsichord parts, not merely figured bass parts, in Sonatas for harpsichord with violin, with viola da gamba, and with flute.

Bach's sons Wilhelm Friedmann and Carl Philipp Emanuel also composed excellently for the harpsichord, as did some elder relations of Couperin, especially his uncle Louis (c1626 - 1661) whose 'unmeasured' Preludes are particularly outstanding. They make sense only on the harpsichord, and provide a challenge to the performer who must deduce a rhythmic structure from notes written all in the same time-value.

Jacobean England produced two notable collections of music for the virginals: the Fitzwilliam Virginal Book (297 pieces by many composers, collected by Francis Tregian while in prison, and named after the museum that now houses his manuscript) and Parthenia or the Maydenhead of the First Musicke that ever was printed for the Virginalls (1613). Otherwise early composers generally wrote music that went equally well on organ or any other keyboard instrument; but Frescobaldi and Froberger are among the acknowledged antecedents of Louis Couperin's harpsichord style.

Almost all Baroque music is based on the continuo concept, analagous to the rhythm section of a jazz band; so in effect all Baroque composers wrote for the harpsichord, and it is an essential part of the orchestra of Handel, Vivaldi, and Telemann, and of many 17th and 18th Century chamber ensembles and opera bands.

A Time Out of Favour

At the end of the 18th Century, around the time of the French Revolution, the harpsichord, along with its intimate playmates the recorder and the viola da gamba, went severely out of fashion. Various technical reasons have been offered to explain this, but it may simply be the case that they were 'relics of old decency' too redolent of the ancien régime to be welcome in the new, egalitarian, Romantic age. Happily their presence, if not their ascendancy, has since been restored.

1In fairness, we must remember that Beecham died in 1961, before a generation of excellent players, restorers, makers and tuners had emerged to sound the instrument's depths and rediscover its possibilities.2The composer Ralph Vaughan Williams compared the sound of the harpsichord to 'the ticking of a sewing machine' and Percy Scholes quoted 'a performance on a bird-cage with a toasting-fork' from an unnamed wit.3By comparison, the piano is a mechanised hammer-dulcimer, with an iron frame and steel strings.4Latterly some of the strings are of steel or phosphor-bronze.5The harmonic curve is derived from the need to double the string-length at every twelfth string, in an instrument that uses uniform strings. This would soon require unfeasibly long bass strings, so in practice the lowest strings cease being uniform and are instead made increasingly heavy.6A good touch was highly valued, and required cultivation. C P E Bach, author of a most valuable book on harpsichord playing, recommended players to practise on the clavichord, an instrument painfully sensitive to varieties of touch.7A fourth 'sixteen-foot stop' is found in some 18th Century harpsichords. This may reflect the use of the harpsichord as a practice instrument for organists, in a time when a second person was needed to pump the bellows of an organ.8The nut is the cut-off point at the end of the string nearest the player.9Scarlatti's Sonatas also make frequent use of crossed hands, but here tonal contrast is not required; they are all playable on a one-manual harpsichord.10The fifth Brandenburg Concerto, though not called one, is in effect a harpsichord concerto.