Recorders Content from the guide to life, the universe and everything 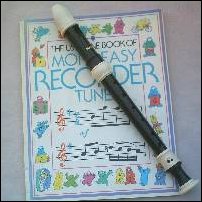 The recorder is a musical instrument of great antiquity. Like its cousin, the flute, it produces a high-pitched, breathy sound. It has a range of about two octaves, somewhat less than the flute. Recorders are not very loud and as a result are not used in orchestras or bands, but they are well suited to small groups and chamber music. Recorders come in a range of different sizes from tiny to taller than the player! The most common versions of the recorder are the descant, or soprano (about 30cm long) and the treble, or alto (about 45cm long).

This Entry presents general information about the recorder. If you want to learn to play one, go on over to the Entry How to Play the Recorder.

How Does it Work?

The recorder is a pipe, usually made from wood or plastic, with a mouthpiece at one end. You blow into a slot in the mouthpiece called the 'windway'. The air is directed against a hard edge called the 'labium' to produce a note. The note is then varied by covering or uncovering holes along the length of the pipe.

Recorders have eight holes along the pipe, including one thumbhole on the back and seven finger holes on the front. The lowest two holes are usually 'doubled'; that is, each hole actually consists of two smaller holes side by side, which are both covered by the one finger.

What's a Recorder and What's a Flute?

The word flute originally meant any sort of instrument that you blow into which uses a hard edge to make the sound. The recorder was a type of flute. Now, the word flute usually means the instrument which is held horizontally across your body. You blow sideways across the hole, using your lips to direct a stream of air against the edge of the hole. In a recorder, by comparison, the windway is positioned so that the air automatically hits the edge, so it is much easier to get a sound out of a recorder.

In other languages, the recorder is still called a flute. In French it is a flûte à bec or 'beaked flute'; in German it is a blockflöte or 'block flute' and in Italian, a flauto dolce or 'soft flute'.

What About the Flageolet?

The recorder is often confused with another instrument, the flageolet. They both produce sound in exactly the same way, the only difference is the number of holes: a recorder has eight while the flageolet has only six.

Recorders come in various sizes. The smallest ones produce very high-pitched shrill sounds, which have been likened to having nails driven into your head. The largest recorders produce soft, mellow sound. Some of these are so big that the player can't blow in the end and reach the finger holes at the same time. A curved metal tube called a crook or bocal is often used to bring the player's breath to the end of the instrument.

Here is a table of the main types of recorder.

Why is it Called a Recorder?

The word recorden in Middle English meant to sing, warble or practise a tune.

The recorder has a very long history. The instruments were popular as far back as the 14th Century. The earliest existing recorder is one found in the moat of a castle in Dordrecht, Holland. It has been dated to the early 14th Century. Unfortunately, it can no longer be played, but replicas of it have been made and played.

In the 15th and 16th Centuries, it was common to have groups of recorders of different sizes to play together. These groups were known as consorts. The recorders had a limited range, of about 1 1/2 octaves, but produced a loud sound and blended with each other well. This type of recorder is now called a Renaissance recorder.

In the 17th Century, the design of the recorder was changed somewhat. It now had a bigger range and could play all semitones accurately in tune, making it better able to play the Baroque music of the time. Unfortunately, the Baroque recorder was not as loud as the Renaissance recorders. Although Baroque recorders were still made in different sizes, the fashion of playing groups of different recorders together lessened somewhat and the recorder became more of a solo instrument - the most common size by far being the treble or alto size (about 45cm).

With the increase in popularity of the orchestra, recorders became unpopular, because they were not loud enough to play with the other instruments. Around the end of the 18th Century, they were entirely supplanted by the flute and music which had been written for recorder was played by flutes. Recorders and the techniques used to play them were forgotten.

At the beginning of the 20th Century, there was a revival of interest in the music of long ago, along with the instruments used to play it. This happened mainly in the UK and Germany. Instrument makers started to make recorders again and the techniques for playing them were rediscovered. In Germany, the adoption of the recorder by the Youth Movement as an instrument for playing folk tunes led to millions of recorders being produced in the 1930s. Since then, there has been a steady increase in the number of quality recorders available and of people able to play them.

The recorder will never be a mainstream instrument, but it will continue to give pleasure to a devoted band of followers for many years to come.