Trombones Content from the guide to life, the universe and everything 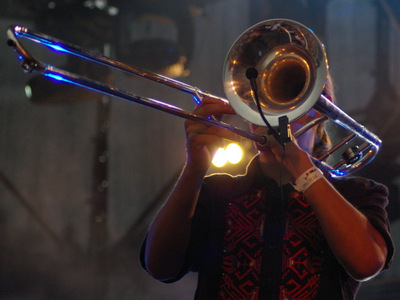 The trombone, whose name is Italian and literally means 'big trumpet', is a musical instrument used in brass bands and orchestras. It consists of a long cylindrical metal tube, folded back into a shape like a paperclip, usually made of brass, which has a cup-shaped mouthpiece at one end and widens out into a bell at the other end. The most distinctive feature of the trombone is the slide, which is a section of the tube which can slide up and down to shorten or lengthen the tube so the trombonist can produce different notes; the longer the tube is, the deeper the sound produced.

How Does It Work?

The trombone is a member of the brass family of instruments, not simply because it is usually made of brass, but because the sound is produced by the player's lips buzzing together1, which produces a noise at the mouthpiece end of the instrument. The musical aspects of the noise are reinforced and amplified by the tube while the less pleasant ones are filtered out. This produces one of the most beautiful sounds of any brass instrument, with a tone more mellow than that of a trumpet. But then, anything is more mellow than a trumpet.

Tightening the lips and blowing harder produces different harmonics, which are higher-pitched notes in harmony with the base note. Moving the slide out lengthens the tube, lowering the pitch in a continuous range by as much as six semi-tones. By combining different harmonics with different positions of the slide, a full chromatic scale can be played and because the slide moves smoothly the trombone is also capable of playing 'in between the notes', or sliding up or down between two notes. This distinctive effect is, in fact, rarely used in trombone music as it can be very tiresome if overdone. This feature also makes the instrument quite difficult to play, as an accurate sense of pitch is needed by the player. Unlike most other brass instruments, the trombone does not have set notes produced by closing and opening specific air-holes, but rather the player must know intuitively how much the slide is to be extended. Anyone who has experimented with a sliding whistle will appreciate this.

The most common trombone is the tenor trombone, which plays an octave lower than a trumpet. It has a range of about two and a half octaves with a lowest note of E2 - the second E on the piano keyboard. There are larger versions called bass trombones which play deeper, and some trombones have an extra section of tubing which can be switched in using a key called a 'trigger' in order to produce extra low notes.

Trombones are among the oldest of brass instruments, having developed from the trumpet in the 15th Century, and were originally known as 'sackbuts', which is thought to have derived from a French word meaning 'push-pull'. The original sackbuts were very similar to a modern trombone but with a narrower bell.

The sackbut was the first brass instrument which could play any note; trumpets and horns could only play notes which were available as harmonics, which meant they were limited in the music they could play. The slide allowed the early trombones to play any note, so they were very suited to playing in groups. They were often made in three different sizes - bass, tenor and alto - and played in a group known as a 'consort of sackbuts'. Such consorts were popular in church music, as they could play the same four-part music as was sung by the choirs of the time.

The association of trombones with religious music continued for many years, well into the late 18th Century - so much so that in Germany, tradition has it that the end of the world will be announced by an angel playing the last trombone! The trombone's appeal was not, however, restricted solely to the church, as evidenced by the fact that Bach wrote several cantatas for accompaniment by trombone.

The Role of the Trombone

The trombone is mainly used as a harmony instrument, providing backing for other instruments, and compared to other orchestral instruments such as the violin or oboe very little solo music has been written for it. Important works include the concertos for trombone and orchestra by Groendahl, Jacob and Gregson. The trombone player Christian Lindberg has commissioned many new pieces.

The trombone is still used occasionally in classical music as an echo of the spiritual music of the original sackbuts with one notable case being in Mozart's opera, Don Giovanni. The hero sees a statue of the man he has killed and, as a joke, invites it to dine with him that night. A chorus of trombones plays some holy music and the statue replies 'I'll be there', creating one of the most hair-raising moments in any comic opera.

In the brass band, the trombone is an important part of the texture, but again it plays mainly harmony parts, and rarely the main tune.

The Trombone in Jazz

The trombone is a very popular jazz instrument and is the harmonic foundation of most Big Band arrangements. For example, Glenn Miller, leader of one of the most famous big bands of all time, played the trombone and his arrangements were written for four trombones, with himself playing a fifth from time to time.

In addition to this, there have always been some very gifted soloists. Two of the most influential players were Jack Teagarden (1905 - 1964) and JJ Johnson (1924 - 2001). Johnson's technique in particular demonstrated the trombone's flexibility to a level that had not even been imagined previously. Some of the younger players, like Ray Anderson, seem to cross the technical limitations of the slide trombone again and again.

1The basic principle of all brass instruments is this farting noise which is known in the UK as 'blowing a raspberry' and in the US as the 'Bronx cheer'.