Timpani Content from the guide to life, the universe and everything 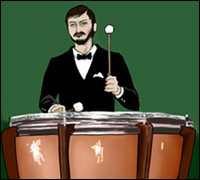 A Physical Description of Timpani

Timpani are very large drums. They consist of a large round metal (usually copper) barrel with a skin2 stretched tight over the top. The skin is the part that you hit and it is also known as the head. The barrel is usually on wheels so it can be moved about easily. Older timpani may have just 'stick-leg' stands. The pitch of the drum varies with the size of the drum; larger drums have deeper pitches. Diameters vary from about 30cm to 90cm. Each drum has a range of about an octave but can only play one note at a time. Before a piece is played the drum is adjusted to play the required note: occasionally the player will have to change notes in the middle of the piece (a difficult thing to do, especially if the drum does not have an accurate gauge, or if there is only one bar of rests in which to tune). A pedal at the bottom of the drum is placed up or down to adjust the note by changing the tension of the skin over the drum. Fine-tuning can be carried out by means of small handles above.

Generally a score will call for two or more notes on timpani, meaning the average piece will feature at least two timpani. In an orchestra, these are situated in the percussion section, towards the rear, and can be extremely loud. Generally timpani players are very versatile as they have the ability to play many other percussion instruments as well3.

Timpani are hit with two sticks or mallets; these come in different sizes and hardness. Usually the sticks are wooden with some form of round, padded head. On softer mallets, the head is made of felt. Harder mallets may just have a leather covering over the round part. Hundreds of years ago, some sticks were just plain wood. The particular pair of mallets chosen for a piece will depend on the dynamics of the piece and what the rest of the ensemble is doing. Sticks can be changed during a piece, to get different tones for different parts of the piece. Sometimes small, round felt dampers are placed on the head of the timpani to make them slightly quieter and reverberate less.

The timpani is a large and exciting instrument. This means that you can do more than just hit the top of it! Sometimes the side of the copper barrel is hit with hard or soft sticks during a piece. It makes an interesting metallic noise. Pieces written for percussion ensemble sometimes have the timpani doing new and interesting things. For example, in some particularly modern pieces timpani are hit with hands, played with cymbals and other objects on top, and have the tuning pedal moved up and down quickly to make a glissando with a 'boing' sort of noise. This sound features in the theme tune from Grandstand4.

The only solo pieces or concerti written and performed for timpani are quite recent. However, timpani provide backing in many pieces. You will be able to hear timpani being played in any concerto for timpani, most works for percussion ensemble, many classical symphonies and more modern music such as the theme tune to 2001: A Space Odyssey5.

Quite a few concerti for timpani have been written in recent years, usually featuring five or eight timpani. Timpani may also be used in percussion ensembles. They usually provide a bass backing and don't carry the melody.

Beethoven's violin concerto, in a version arranged for piano by the composer, contains large passages of timpani. The timpani have a 'battle' with the piano. Something similar occurs in Carl Nielsen's 4th symphony, where two sets of timpani battle with each other. Josef Haydn even wrote a special symphony called the 'Drum Roll Symphony' (No. 103). Unfortunately, apart from two solo loud drum rolls in the first movement, the piece actually does not contain much timpani!

1The singular form would technically be timpano or timpanum, but this is rarely used in English. In fact, timpani is now incorrectly considered to be the singular form, and timpanis is often used. There is an alternative spelling of tympani.2This was traditionally an animal skin, but now plastic is used most often.3However they usually don't do so in one orchestral piece. The auxiliary percussionists will swap and change smaller instruments, but the timpani part is so important that the timpanist stays with it for the whole piece.4About twelve bars in, the rising boing sound.5This piece is the opening section of Thus Spake Zarathustra by Richard Strauss.