Gustav Mahler: The First Symphony Content from the guide to life, the universe and everything 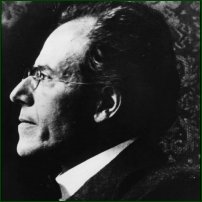 The animals of the forest accompany the dead huntsman's coffin to the grave; hares carry the banner, then comes a band of Bohemian musicians, followed by singing cats, toads, crows, etc., all playing their instruments...

Symphony No. 1 in D major

Strange sounding and modern to the ears of late 19th Century audiences it may have been, but the first two movements of the four-movement version of Mahler's First Symphony that we hear today are quite conventional in structure. The first movement, in D major, in the established tradition of classical symphonies has its second subject in the home key's dominant of A major, while the second movement is in a conventional A-B-A sonata form; a Scherzo with a central Trio. In the last two movements however, convention has been left behind and Mahler is speaking his own language.

Mahler himself ascribed the title 'Titan' to the symphony, although the allusion to the novel of that name by Jean Paul must not be taken too far. Mahler's reference was merely to a strong, heroic figure, one who battles with the struggles and adversities that life deals him.

Is the work autobiographical? The inclusion of material from the song cycle Lieder eines fahrenden Gesellen suggests it might be. This set of four songs (originally there were six) Mahler wrote for, and dedicated to the singer Johanna Richter, with whom he had had an unhappy love affair. The material of the second movement is based on an early song Hans und Grete.

Introduction to the First Movement

The slow D minor Introduction to the first movement is a piece of pure picture painting. Mahler described it as depicting Nature awakening from a long Winter's sleep. The strings play high octave As in harmonics. We hear cuckoo calls (here unusually portrayed by the interval of a falling fourth) and distant trumpet calls – the interval of a fourth is something of a recurrent motto in this symphony. These calls lead to the movement's main theme, in D major, taken from the second Gesellen song (Ging heut' Morgen übers Feld), before the mood returns to the music of the Introduction. The remainder of the movement is based almost entirely on the Gesellen material, developing it extensively and leading to a climax, with fanfare brass. The movement finally scurries to a conclusion.

The second movement is a Ländler, in A major. The Ländler is a rustic Austrian waltz-like dance, and movements based on it are common in Mahler's symphonies. It is introduced by a figure played by the cellos and basses, featuring the interval of a fourth. The stomping bass rhythm of this figure is derived from the song Hans und Grete. The middle of the movement features a beautiful little F major Trio, before the Ländler returns to complete the movement with a flourish on woodwind and brass.

The third movement is the D minor Funeral March depicting the scene from the woodcut: The Hunter's Funeral Procession. It starts with a muffled drumbeat, alternating D and A – the interval of a fourth again. This leads into a canon on the children's rhyme Bruder Martin, otherwise known as Frère Jacques. A central Trio in G major is based on material from the fourth of the Gesellen songs (Die zwei blauen Augen von meinem Schatz), after which the Funeral March returns, and the movement ends quietly, as it began, with the alternating D and A drumbeats.

Without a break, the final movement begins, in F minor: a violent outburst, a cymbal crash (known to have raised unsuspecting elderly ladies bodily from their seats!) Strings compete with the woodwind and brass for control of the middle ground. As the energy starts to dissipate, we hear the main theme of the movement in the horns – an irregular march. In a brief period of calm, Mahler gives us his second subject – an achingly beautiful passage for violins accompanied by horns. As this fades quietly away, themes from earlier in the movement are developed, leading to an early statement of what will be the strident brass chords at the end of the symphony. However Mahler is not done yet; we are still only mid-movement. After a pause, the music with which the symphony began, nature awakening, returns, complete with trumpet and cuckoo calls.

In the recapitulation, Mahler revisits his themes, before the main theme of the movement is brought back, leading to a climax. In the coda, strident, D major, bell-like chords bring the symphony to a triumphant conclusion.

A work entitled 'Symphony I' was sketched in 1885, possibly during Mahler's time as Musical and Choral Director at the Theatre in Kassel, in which case it would have been in the first half of that year. The Andante movement, known as Blumine, certainly derives from incidental music that Mahler wrote while at Kassel to accompany a play: Der Trompeter von Säckingen. It is quite possible that the Scherzo may date from even earlier – a 4-hand piano fragment of this movement is known. Throughout, the symphony quotes from the song-cycle Lieder eines fahrenden Gesellen, which was certainly written in 1884. Whatever the genesis of this symphony, it is clear that the main part of the composition was done in February and March 1888.

The first public performance was of a five-movement work entitled 'Symphony in Two Parts'. Part I comprised three movements: Introduction and Allegro comodo, Andante, and Scherzo; Part II comprised two movements: Funeral March and Attacca: Molto appassionato. Mahler conducted this performance as part of the Philharmonic Society's second subscription concert of the season, which took place at the City Hall, Budapest, on Wednesday, 20 November, 1889. Given the conservative tastes of the Budapest public, familiar only with the classical symphonic repertoire, the symphony's Part I was better received than its Part II. The work was clearly not to the taste of the critics either, one asking why Mahler had provided no programme to explain his symphony. Particularly hurtful to Mahler, who above all saw conducting as a necessary evil, and composition as his true purpose in life, would have been the comment by Viktor von Herzfeld, critic of the Neues Pester Journal, who suggested, ...Mahler the conductor belongs in the first rank of his profession, but he resembles the others in that he is nothing of a symphonist1.

At the first performance, the symphony had no published programme to explain the work, for which, as already mentioned, he had been criticised in the press. For its second performance, Mahler decided to bow to the then current vogue for providing audiences with texts to aid the understanding of 'programmatic' music. He entitled the symphony 'Titan, a tone poem in the form of a symphony', after a book by the early 19th Century novelist Jean Paul, one of Mahler's favourite prose writers. The two parts and the individual movements were also ascribed titles:

In the sub-title to the Funeral March, the reference is to a woodcut engraving, attributed wrongly by Mahler to Jacques Callot, entitled The Huntsman's Funeral, in which we see the animals of the forest accompany a dead huntsman's coffin to the grave. Mahler went on to describe some of the movements further – 'The Introduction [to the first movement] depicts the awakening of nature from its long winter sleep', while the final movement 'follows [the Funeral March] like the last despairing cry of a deeply wounded heart'.

Early in 1893, Mahler revised the symphony, removing the Blumine movement, but he restored it in August, prior to the second performance. This took place at the Ludwig Konzerthaus in Hamburg, the city where Mahler was now Kapellmeister at the Stadtoper, on Friday, 27 October, 1893. The symphony occupied the second half of the concert. The first half included six of Mahler's songs from Des Knaben Wunderhorn, as well as Beethoven's Egmont Overture, two arias by Marschner and Adam, and Mendelssohn's Overture, Fingal's Cave. This time, the audience reception was excellent – much better than it had been at Budapest. The critics acknowledged Mahler's skill at orchestration, but were still generally averse to the unfamiliar content. However, Ferdinand Pfohl, critic of the Hamburger Nachrichten, called it an 'important work of genius'.

The symphony's third performance took place when it was scheduled at the 13th Allgemeine Deutscher Musikverein in Weimar on 3 June, 1894. Mahler was unable to conduct the early rehearsals personally, and left the task to Richard Strauss. To Mahler's dismay, he arrived at Weimar to find the orchestra in poor shape, tired after a long season, and ill-prepared. Worse still, he found that the festival schedule only allowed time for one more rehearsal with the orchestra. For this hearing, Mahler dropped the descriptive text but retained the programme from the Hamburg performance. The symphony had been included in an incredibly long concert, lasting over four hours. The work was less successful with the audience than it had been at Hamburg: there was more booing than applause. The critics also remained unconvinced.

This was the last occasion when the symphony was performed (by Mahler) with the Blumine movement. After the performance, Mahler removed it permanently and the movement disappeared until the mid-1960s, when it was rediscovered by the Mahler scholar, Donald Mitchell.

The next performance, the fourth, was at an all-Mahler concert in Berlin, on Monday, 16 March, 1896. This time, the symphony was given in the form we know it today, as the 'Symphony in D major'. Very few tickets were sold – most were given away – and the hall was half-empty. The concert started with Todtenfeier, described as the 'First movement of the Symphony in C minor for full orchestra' – soon to become the Second Symphony. This was followed by the Lieder eines fahrenden Gessellen, sung by the Dutch bass-baritone Anton Sistermanns. The audience responded warmly to both pieces, but booing started after the D major symphony's 'Funeral March'. The response of the Berlin critics was true to form. Typical was the view expressed in the Vossische Zeitung – The Finale of the First Symphony was multi-coloured, interminable, slipshod, vulgar...a succession of odds and ends disguised in a charlatanesque ornamentation of instrumental effects2.

Mahler did not conduct the symphony again for two years. Despite its shaky start, it has become one of Mahler's best-loved and most performed symphonies.