Queen's Speech Bingo Content from the guide to life, the universe and everything 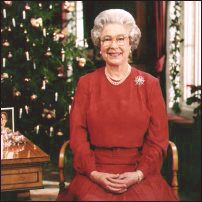 Each Christmas, at this time, my beloved father broadcast a message to his people in all parts of the world. Today I am doing this to you, who are now my people...
— The opening words to the Queen's Christmas message, 1952.

There are very few events which bring the British together as a nation, but one tradition has done so since 1952, and it occurs every Christmas Day at 3pm. This is the time when families, having gorged themselves stupid on a turkey dinner, will repair, sherry in hand, to the lounge and switch on the TV.

The National Anthem will sound. Drunken patriarchs will attempt to stand up, urging others to do so, and bark at the kids to switch off their noisy toys and pay attention. For this is the time that Her Majesty the Queen delivers, with perfect diction, her annual Christmas message to the Commonwealth of Nations.

Many incorrectly refer to this broadcast as the 'Queen's Speech', but the oration which properly bears this name is the one which she delivers from her throne in the House of Lords on the annual opening of Parliament. In fact, that speech is not written by the Queen, but by her Government, and it outlines the legislation which the politicians plan to introduce during the next parliamentary session.

Neither was the Christmas message originally written by the monarch. The tradition was started by her grandfather, King George V, who made his first broadcast on the fledgling BBC Radio service in 1932. His inaugural speech was written by the author Rudyard Kipling.

Children, of course, find the whole thing boring. Maybe this speech is preceding a family movie they want to watch, or maybe they just want to plug in their new games console. Some families make a point of waiting until the speech is over before they open presents, so the kids could be getting very excitable indeed. So how can we keep them quietly occupied for 10 minutes?

The answer is to play a game where they have to pay careful attention to the broadcast, and that game is Queen's Speech Bingo!

It's not too difficult a concept to grasp - you have a bingo card with some words and phrases which might crop up during the course of the speech. When you hear them, you strike them off, and the winner is the first to get a line. We'll include a few sample cards at the end of this Entry, but you may like to have a go at preparing your own - you just have to guess what she is going to say.

What is She Going to Say?

In her Christmas message, the Queen invites us to share her thoughts. It's not just a 'state of the Commonwealth', it's part sermon and part round robin letter, too. Here are some themes to consider - we've also suggested a few key words to watch out for in each category.

To give you an idea of the likelihood of each, we've analysed Her Majesty's past Christmas messages and indicated the frequency that each suggested word has occurred1. You can find the full list of historic speeches on the British Monarchy website.

Prince Philip and I went to Ottawa for the Centenary celebrations and it was a most moving occasion. Canada has every reason to feel proud of her achievements in the last hundred years.
— 1967.

Last July we had the joy of seeing our eldest son married amid scenes of great happiness, which made 1981 a very special year for us. The wonderful response the wedding evoked was very moving.
— 1981.

The Royal Family has for many years invited the media to share their everyday lives (in a somewhat controlled manner). Royal births and jubilees are likely fodder for the Christmas message, as are the less happy times, too. In 2001, both the Queen's mother and sister lost their lives. In 1992, not only was the Royal Family suffering matrimonial troubles, but Windsor Castle was partly gutted by fire. On each occasion, the Queen shared her grief with the nation3.

The devastating tsunami struck countries around the Indian Ocean causing death and destruction on an unprecedented scale. This was followed by a number of vicious hurricanes across the Caribbean and the inundation of the city of New Orleans. Then in the autumn came the massive earthquake in Pakistan and India.
— 2005.

The Queen is always likely to share in the nation's successes on the world stage, and sporting events obviously spring to mind. Her daughter Anne has long been a member of the British Olympic Association, and the Queen herself performs the ceremonial opening of the Commonwealth Games. On the other side of the coin, the world's natural disasters will often get a mention, particularly if one of the Royals has visited the aftermath.

Today I am speaking to you from the Library at Windsor Castle, in a room which was once occupied by Queen Elizabeth I. This is my home, where for many years now my family and I have celebrated Christmas.
— 1982.

At regular intervals throughout the year, the Royal Family will decamp en masse to one of their country piles - Sandringham, Balmoral or Windsor - where they can spend a few weeks out of the limelight, riding, shooting pheasants or walking their dogs around the estate.

Ones to avoid: 'corgi' (0) - oddly, Her Majesty has never referred to these by name in the Christmas message.

We all have something to learn from one another, whatever our faith - be it Christian or Jewish, Muslim, Buddhist, Hindu or Sikh - whatever our background, whether we be young or old, from town or countryside.
— 2001.

One of the most fruitful QSB categories, Her Majesty is the head of the Church of England. In her message, she will always seek to remind viewers about the true meaning of Christmas, and will offer a very personal view on religious and moral issues.

And also today I want to draw attention to another group of people who deserve our thoughts this Christmas. We have all been conscious of those who have given their lives, or who have been severely wounded, while serving with the Armed Forces in Iraq and Afghanistan.
— 2007.

Two of the Queen's grandsons, William and Harry have served with the British Armed Forces, and members of the Royal Family often visit those regiments of which they are Colonel-in-Chief.

A few weeks ago .... I met in my home a group of people who are working for better understanding between people of different colour, different faiths and different philosophies - and who are trying to solve the very real problems of community relations.
— 1976.

Her Majesty is reportedly well-informed about the social problems affecting not only the UK and Commonwealth, but the whole world, too.

My daughter, as President of the Save the Children Fund, saw some of these volunteers looking after refugee children in the Far East. Nowhere is the voluntary effort more active than in charities and organisations devoted to helping children to survive the hazards to which they have been subjected.
— 1979.

Members of the Royal Family are patrons of all kinds of societies and charities, and attend regular engagements to offer their support.

The United States was born in bitter conflict with Britain but we didn't remain enemies for long. From our reconciliation came incalculable benefits to mankind and a partnership which, together with many countries of the Commonwealth, was proved in two world wars and ensured that the light of liberty was not extinguished.
— 1976.

The Queen is well-known for her very correct use of the English language. She will often use the pronoun 'one', and will correctly say 'my husband and I'. Look out also for a wide, well-chosen vocabulary, often including words of many syllables.

Don't make the cards too big. It's decidedly difficult predicting exactly what the Queen is going to cover, and the speech is not particularly long. In recent years it has been supplemented by video footage of the events she describes, which has tended to reduce the length of the message. A simple three-by-three grid should be sufficient.

You could make up ready-completed cards, or if you prefer a variation, you could hand out blank ones, then have players select the words from out of a hat - write them on peel-off sticky labels for convenience. If you're into making home-made Christmas crackers, then why not include a Queen's Speech Bingo card in each?

In recent years the speech has often been leaked to the media a few days before Christmas, so you might want to make up your cards in advance of this.

Finally, don't forget to wrap up a small prize for the winner.

1We've lumped similar words together, so, for example, the frequency for 'visit' includes 'visit', 'visits', 'visiting' and 'visited', but not, say, 'visitor'.2A reference to one of Prince Philip's well-publicised gaffes. In 1986, addressing a group of Edinburgh university students in Beijing, he said, 'If you stay here much longer you'll all be slitty-eyed.'3Contrary to popular belief, the phrase annus horribilis did not appear in her 1992 Christmas message. The Queen did however use it in the speech she made to the Guildhall, London one month earlier.