The Truth About Noise Content from the guide to life, the universe and everything 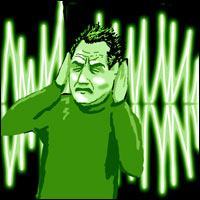 First of all, that neighbour practising bassoon is not producing noise - not in the strict sense of the word. One of the definitions of noise is that it doesn't contain any useful information. While the neighbour's bassoon practising might be highly annoying, out of tune and off-tempo, the sound contains a lot of information in the form of pitch, phrase, direction and amplitude. If you can figure out - by analysing the sound - that it comes from somewhere (your neighbour's apartment, the street, the children's room) and if you can identify that it's a certain type of sound (a bassoon, an internal poker vibrator, a dental drill), then it is not noise - technically speaking, of course.

Then, noise is not only related to sound. Flickering or speckled images on the TV screen, due to bad fine-tuning for example, are a good example for visual noise. In fact, any random fluctuation of any measurable or perceptible entity, such as sound pitch, light brightness, voltage, temperature, colour, content of data, is defined - in a general sense - as noise.

Third, noise is not worthless. Our brains are conditioned to recognise and to process noise better than any supercomputer. Our brains actually expect to get information along with some noise. For that reason, completely noiseless information, an image for example, is often perceived as artificial. It is often convenient to add noise to digitally generated or sampled art, like music or pictures, so that the final product has a more natural texture. There are other more special, scientific and complicated uses for noise, but let us not get lost in details here.

In a mathematical definition noise results from uncorrelated, random events1. The sequence of heads and tails in an idealized coin tossing experiment is one simple example for a sequence of uncorrelated, random events. The produced sequence of heads and tails can be considered to be pure noise. Since noise does not contain any information. It is not possible to use it to make predictions or physical statements and it is not possible to figure out by analysing the previous results whether the next is going to be a head or a tail. The impossibility to use a random sequence of heads and tails, or numbers, to produce a statement, doesn't make noise useless. Noise can be used to generate random numbers, as used for example in cryptography - but this is a topic of its own.

While there is large academic interest in noise and randomness in general, there is - using that strict definition - no such thing as pure noise in the real world, with the possible exception of quantum mechanical systems. In a real experiment with coins, to stay in our picture, the outcome could be predicted if one would be able to compute the motion of the coin considering all the involved parameters (the tossing speed, the influence of the air viscosity on the turning of the coin, etc.). The resulting sequence of heads and tails - the 'noise' - is in reality pseudo-noise. In scientific conventions it is possible to hear people muttering about 'deterministic' and 'non-deterministic noise'. But let us forget about that 'pure academic noise' discussion.

Amounts and Flavours of Noise

In a more neutral, or practical definition, noise is statistical, uncorrelated fluctuations of data - if they are due to deterministic processes or not is, for the time being, irrelevant. Using that definition it is possible to analyse and to characterize noise.

One of the stringent conditions that define noise is that the fluctuations must be uncorrelated. In other words, the sequence of values that make up the fluctuations must not show any patterns in order to be called noise. Sets of data can easily (with the aid of computers this is not a problem nowadays) be checked for repeating sequences or patterns via an autocorrelation analysis. The absence of repeating patterns is one of the necessary criteria for noise.

The second criterion states that fluctuations have to be statistical. In other words, the mean value has to be a constant. A sequence of non-repeating numbers increasing linearly, for example, is not noise (as someone would be able to use the sequence to make predictions). This second criterion is also easily tested. As a consequence, one random number or one measurement alone cannot be considered to be noise - noise will always be a product of a sequence of numbers or measurements.

How Much Noise is in There?

The amount of noise cannot be quantified by itself - this is similar to affirming 'strawberries taste better' (better than what?). As with the taste of strawberries, noise can only be measured in relation to something else that can be quantified, an amount of signal. For this reason noise is quantified as a proportion between signal and noise, which is a quantity called the signal-to-noise ratio (abbreviated SNR). Usually, the higher the SNR the better.

The Different Flavours of Noise

The statistical distribution of the values that make up noise - the spectrum of the noise - can be analysed. (To obtain a spectrum all one has to do is to ask the following question: 'How frequently does a certain value appear in relation to all other values?' This question is asked for every value of interest. If the results are sorted according to the frequency, you get a frequency spectrum.) The spectra can be shown to have different shapes, leading to various types of noise, and descriptions for noise, some of which will be explained in the following.

White Noise: If the frequency spectrum is flat, that is, all values occur in all frequencies, then the noise is called 'white' - in analogy to the spectrum of white light, in which all colours (frequencies) are present with the same intensity. White noise is also the 'pure academic noise', the one and only, real noise we talked about above. All other forms of noise are pseudo-noise. However, it is not possible to obtain true white noise from real life things, because there is no such thing as infinite or zero frequency. In spite of this, noise can be 'white', however, within a certain range of frequencies.

Black Noise: Like 'darkness beams', black noise doesn't exist as such. Black noise is, paradoxically, just a specific form of white noise. It is white noise with opposite signs, it is the noise that cancels out white noise, or in a sense 'anti-noise'. The term 'black noise', however, has found some usage as it can be used to suppress certain ranges of 'noise' (eg, reducing the roar in the passenger cabins of airplanes).

Pink Noise (1/f-noise): In real-life fluctuating things, the frequency of the fluctuations determines the involved energy. If something is fluctuating very rapidly, there's much energy involved, if something is fluctuating slowly, there's little energy involved. With this in mind, it is often more useful to look at a spectrum of 'energy per time', or power-spectrum, instead of the energy spectrum, or frequency spectrum itself (one punch per second hurts more than one soft touch per second - same frequency different power). In order to get a constant power-spectrum, the frequency spectrum decreases with 1/f. In analogy to white noise, this type of noise is called pink, as visible light with that frequency spectrum would be pink. This kind of noise is often found in the world of acoustic gadgets: A pink-noise generator (used to test audio systems), for example, generates random sound pitches with equal power (energy per time).

Brown Noise (1/f2 noise): This is a special form of noise, and is not named after a colour (or digestive sounds), but after botanist Robert Brown (1773 - 1858), of 'Brownian Motion' fame. In this particular case the fluctuations occur like in a 'random walk' or in diffusion: The final result is white noise (the random numbers are everywhere), but for a finite interval of time the numbers have a higher probability to stay close to the previous value than to move far away from it.

Shot-noise : The amplitude of noise often depends on the intensity of the measured signal, because the noise of the background adds up with the noise from the measured property. Shot-noise increases linearly with the square-root of the (signal) intensity. Shot noise plays a key role in the detection of intermittent data, for example laser pulses or sequences of ones and zeroes through a wire. It is called shot-noise in analogy to the distribution of bullet-holes produced by a shotgun.

1Note that random events can be correlated. Such events do not produce noise.