Round Robins Content from the guide to life, the universe and everything 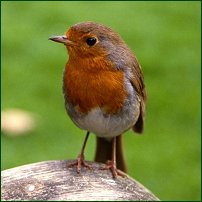 Have you even received a round robin? Or signed one? Or helped create one? Or played in one? Or possibly watched one skipping along your garden path? The problem is that in each of those cases, you would have been doing completely different things. Several diverse activities and objects are called round robins, though some are better known than others.

Overweight little redbreasted fellow. Often seen out and about in winter. Rather too fond of worms and fruit for his own good. The name 'robin' is really something of a nom de plume1; his real name is Erithacus Rubecula. There's some distant American relation who keeps trying to pass himself off as 'robin' as well, but his real name is Turdus Migratorius.

The way the term was used in the 18th Century has no connection to the oversized avian. Then, it referred to a letter of protest, like a petition, signed by many people. The name derives from the practice of the signatories writing their names in a circle, or round, so that no one name stands out above another. This was done in order to conceal the identity of the ringleader and hopefully prevent reprisals against them. It is thought that the crew of a ship may have sent such a letter to the captain, declaring their intention to mutiny unless their conditions changed.

A modern round robin letter, though, is something of the other way around. It's a letter written by a family at the end of the year, copied, and sent out to everyone they know with their Christmas card. Typically this letter contains glowing descriptions of the family's year, explaining how (for example) the father of the clan has moved up the company into an even better position and so they can how afford the speedboat they've always wanted, how young Felicia is excelling in her riding lessons and how little Tarquin has constructed a scale model of the Eiffel Tower out of building blocks although he hasn't even started school yet! Broadcaster and parliamentary sketch-writer Simon Hoggart has made it his mission to ridicule, and so hopefully shame the writers of this kind of round robin. Maybe it would help if the recipients of such round robins ganged together and presented the senders with an 18th Century round robin. Or maybe not.

More often referred to as chain letters, this type of letter is also known as a round robin. It's a letter that a 'friend' of yours has sent you, having been sent it from a 'friend' of theirs. The letter generally has quite pointless content, but ends by proclaiming a gypsy curse on you if you don't pass the letter on to ten of your friends. Of course, if you are any kind of friend you will do no such thing, and just throw the offending piece of paper into the bin, cursing the sender for being gullible enough to forward it to you in the first place.

A round robin story is one that several (well, at least two) people write in turns. The order in which they write is decided before the story is started, though if there are only two people, then they only have to decide who goes first. Once all that is worked out, the first author writes the first paragraph, which hopefully begins with the words 'It was a dark and stormy night'. Once complete, the story is passed to the second author to write a paragraph following on from the first, and the story is passed on again. This continues until the collective authorship decides the story is finished, or just decides to do something else, and so stop.

A slight variation on this form of round robin is where a group of people work on a piece of craftwork, be it knitting, crochet, cross-stitch or some such, one at a time. When each member of the group has finished their part, the work is then forwarded to the next person in the group.

A round robin league competition is one where each player (or team) in the league plays each other a fixed number of times, in an order generally decided in advance by the organisers of the competition. For example, the English Football League plays in a round robin format. During the course of the football season every team in each league (be it the Premiership, the Championship and so on) plays every other team in that league twice - once at their home ground and once away.

In computer systems, 'round robin' is a method of allocating a small number of resources to a large number of clients, where each client requires the use of the resource for a short time. For example, the clients might be PCs on the World Wide Web, and the scarce resources might be servers serving up webpages. If there is only one server, then everybody gets served in the order the requests arrive, but if there are two or more servers, some method is needed to decide to which server each client gets allocated.

Round robin is a fairly crude allocation method - if one server is more powerful and finishes its work quicker than the others, no account is taken of this. Nevertheless, it is very simple to implement and is often used in the computer world.

Burglary by the rotund. Perhaps being apprehended by the presently-portly Burt Ward, wearing an outfit reminiscent of his role in the 1960s TV version of Batman. All right, perhaps not.