Being an Away Supporter at a Football Match Content from the guide to life, the universe and everything 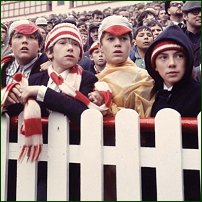 Maybe you're sick of giving money to a chairman you hate, but still want to go to games. Maybe you're one of the committed few who will willingly get up at 5am to travel the length of the country to see your team get hammered 6-1 and then not get home until gone midnight on a regular basis. Maybe you've noticed that the away fans at your ground always seem to be singing louder, jumping about more, and just generally having more fun. The reasons for it are plentiful, but there comes a time in almost every football fan's life that they decide 'I want to go to an away game.'

Step One: Choosing your match

The first thing any prospective travelling football fan needs to do is work out where it is that they will be travelling to. When doing this, a number of things need to be taken into account.

There are two ways to get hold of a ticket for a football match. These can widely be considered to be the 'right' way and the 'wrong' way. The first way is to go about it the same way you go about getting tickets to a home game. Phone or visit your team's ticket office, usually located on the same bit of land as the stadium whose team it services, or use your club's official website. The second way is to buy from a ticket tout. This course of action is widely considered to be the 'wrong' way as it will leave you substantially out of pocket as your ticket will not cost you anything like the figure printed on it and will probably leave you surrounded by home fans, home fans who will treat you appearing uninvited in their section of the ground insulting their team in much the same ways as they would treat you appearing uninvited in their front room insulting their family photographs. Expect stern disapproval as a matter of course. If you find yourself in this unenviable position you will at least get to indulge any spy fantasies you have. Try not to be noticed by anyone by covering up any club shirts or badges you have and don't leap around if your team score. Whatever you do, don't stand on your seat, whirl your scarf around your head and sing your club's anthem. That would just be stupid.

Travelling to an away game requires a certain amount of preparation. At the very least you will need three things:

Once you have secured these three items, you may want to think about ancillary provisions: a bottle opener2 will let you access any drinks you take with you without ruining your teeth; a pack of cards or a personal stereo to help long journeys pass more quickly; and a mobile phone to allow you to let your non-travelling friends know how much fun you're having. If you choose to drive, a map or directions to your destination and a thermos flask of something to keep you awake may well be needed.

Once you're fully prepared, it's time to set off.

Everything in life carries an element of risk, and going to a football match is no exception. As such, you should be prepared for any potential pitfalls that you may stumble across on your journey. The two main potential risks facing a travelling football fan are opposition fans and the police force.

Assuming you have a ticket, haven't managed to find any hooligans or antagonise the police force you should be able to find the stadium. Sometimes you will have to negotiate a baffling series of directions intended to keep you away from home fans, other times you will be allowed to freely mingle. In either case you should head to the turnstile your ticket corresponds to and enter the ground. You should now be free to watch the match in a loud, unruly and generally excitable fashion. Then after the final whistle goes, it's time to go home.

Well maybe it's not time to go straight away, as some grounds will request that travelling fans remain inside the stadium for up to half an hour to allow home fans to disperse. Other grounds don't just request this; a line of stewards and police will be deployed by the exits to make sure you stay inside. After you are allowed out, all that remains is to head home. This is perhaps the most simple task of the day for those who drive to games, so long as they can remember where they're parked. For those using public transport, the risks present before a match are still a concern, as is finding your way back to the train station because taxis are scarce outside stadia and buses attract huge queues. If the station is within walking distance there will often be signposts directing you towards them, whereas if it isn't, you will probably have to join one of those queues.

If you do get to the train station without a hitch, you still may not be home and dry. If, for whatever reason, you live in a different city to the team you support then predictably you may not want to get the same train as the majority of your team's fans. Unfortunately, the police may have instructions to put every away fan onto a particular train, so to avoid an unplanned trip to your home ground you may want to take proof of your address to the game with you.

Once you are home, you'll probably want to put your feet up, have a cup of tea and watch the football highlights from other matches but rest assured within a few days your mind will wander and you'll be planning your next away match adventure. There are 92 clubs in the English football league5 in any given year, and each of them has a stadium so there are plenty of potential trips in your future!

1Although it is well worth remembering that your team's fiercest rivals may not be local. For example Manchester United and Leeds United are separated by 40 miles, a small mountain range and a history of sometimes violent antipathy.2Preferably a flat one with no sharp edges that can be in no way misconstrued as a weapon.3They like to refer to themselves with gang names such as 'The Red Army', 'The Headhunters' and 'The Service Crew'.4Those which remain open, as well as the pub closest to the ground may well be 'Home Fans Only'. Don't kick up a fuss and threaten to write to your MP; it's just the way it is.5And the Premier League, which while being the top division of the English football league is administered separately.