The Uses and Gratifications Model of the Media Content from the guide to life, the universe and everything 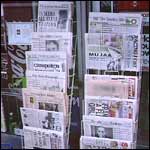 The mass media is a huge phenomenon. Through the various different platforms, print or broadcast, the media is able to reach millions of people like no other force. Without the media, powerful speeches by politicians would affect no one, local events would remain local, and performances by great actors would be seen only by the people in the immediate audience. The media overcomes distances, and builds a direct relationship with the audience. Many sociologists have attempted to explore what effects this has on society, and how the media fits in to our social network. Through many programmes of research, including focus groups, surveys, questionnaires, clinical studies and plain hypothesising, a number of models describing the media's relationship with audiences have been drawn up.

Initially, researchers approached the subject from the angle of how the media is able to manipulate audiences, injecting messages into their minds. This 'hypodermic' model, as it was later termed, became rejected after closer examination. The 'Uses and Gratifications' model represented a change in thinking, as researchers began to describe the effects of the media from the point of view of audiences. The model looks at the motives of the people who use the media, asking why we watch the television programmes that we do, why we bother to read newspapers, why we find ourselves so compelled to keep up to date with our favourite soap. The underlying idea behind the model is that people are motivated by a desire to fulfil, or gratify certain needs. So rather that asking how the media uses us, the model asks how we use the media.

The model is broken down into four different needs.

The surveillance need is based around the idea that people feel better having the feeling that they know what is going on in the world around them. One of the genres this is often applied to is news. By watching or reading about news we learn about what is happening in the world, and as the news is usually bad news, this knowledge leaves us feeling more secure about the safety of our own lives. This idea might seem a bit strange, that the more we know about tragedies the safer we feel, but sociologists argue that ignorance is seen as a source of danger, and so the more knowledge we have the safer we feel. When looking at the news it's easy to spot news items that give us this reaction. For example if it wasn't for watching the news we might be unknowingly left with five pound notes that are worthless1, or become vulnerable to the latest computer virus2, or end up in a hospital with an awful track record3.

It's not just news that fulfils the surveillance model however, the theory can also be seen in many consumer and crime-appeal programmes such as Watchdog4, Rogue Traders5 and CrimeWatch6. These appeal directly through the idea that they are imparting information that people need to know. The programmes talk far more directly to the viewer, and even try to get the viewer involved in the programme. Because these programmes deal purely with national and local concerns, without such vagaries as world news, the issues ostensibly have the potential to affect the viewer directly. By watching the programme we are finding out about which particular insurance companies are a con, how mobile phone muggings are taking place and the tricks plumbers use to charge us through the roof. This knowledge of life's potential pitfalls gives us the feeling that we are more able to avoid them (though in reality it's hard to see how this actually happens).

The surveillance model then is all about awareness. We use the mass media to be more aware of the world, gratifying a desire for knowledge and security.

The personal identity need explains how being a subject of the media allows us to reaffirm the identity and positioning of ourselves within society. This can most be seen in soaps, which try to act as a microcosm of society as a whole. The characters in soaps are usually designed to have wildly different characteristics, so that everyone can find someone to represent themselves, someone to aspire to, and someone to despise. For example you might feel close to a character who is always falling victim to other people, and this connection might help you to understand and express your own feelings. You may also really like a character who seems 'cool' and leads a lifestyle you'd like to lead. This relationship could act as a way to channel your own life, helping you to set goals to work to. Finally there may be a character you really can't stand. By picking out their bad characteristics and decisions ('oh, she shouldn't have done that'), it helps you to define your own personal identity by marking out what you're not like...

The use of the media for forming personal identity can also be seen outside soaps. Sports personalities and pop stars can often become big role models, inspiring young children everywhere (which is why there's such an outcry when one of them does something wrong). Even the 'seriousness' of news can lend itself to gratifying personal identity, by treating news anchors as personalities, rather than simply figureheads relaying information:

Watching the news with my grandma is a nightmare. She's always commenting on the newsreader's clothing, hairdo or mannerisms.

Relationships with the Media

Many people use the television as a form of companionship. This may seem sad, but think about how many times you've watched the TV on your own, or with other people but sitting in silence. The television is often quite an intimate experience, and by watching the same people on a regular basis we can often feel very close to them, as if we even know them. When presenters or characters in a soap die, those who have watched that person a lot often grieve for the character, as if they have lost a friend. Some events can even cause media outcries, such as the imprisonment of Deirdre from the TV soap Coronation Street, which caused many national newspapers to campaign for her release. We also talk to the TV a lot. Not many football fans can sit through a televised match without shouting at the players or the referee, and many people tell characters what to (or not to do) next.

The more we watch the same personalities, the more we feel we get to know them. Reality TV shows such as Big Brother give us such a feeling of intimacy with the participants that they can become part of our lives. Even though the relationship is completely one-sided, it's easy to see how we can fall in love with TV personalities.

Using the Media Within Relationships

Another aspect to the personal relationships model is how we can sometimes use the media as a springboard to form and build upon relationships with real people. The EastEnders strapline 'Everyone's talking about it', despite being a clever marketing tactic, does hold up when looking at social uses of the media. Having a favourite TV programme in common can often be the start of a conversation, and can even make talking to strangers that much easier. There's also some studies that suggest that some families use sitting around watching the television as a stimulus for conversation, talking to each other about the programme or related anecdotes while it is on. This kind of use (as well as some of the others), is heavily satirised in the BBC sit-com The Royle Family.

The diversion need describes what's commonly termed as escapism - watching the television so we can forget about our own lives and problems for a while and think about something else. This can work with positive programmes, such as holiday shows or the constant happy endings in the Australian soap Neighbours, which help to cheer us up and forget our own problems, and with negative programmes, such as the bleak EastEnders or a tragic film, which help to put our own problems into perspective ('At least my life's not that bad!').

The diversion model also accounts for using the media for entertainment purposes, such as a good spy film, and for relaxation (slumping in front of the telly, don't care what's on). The media can give us emotional release and also sexual arousal, which includes a sexy scene in a film as well as pornography.

Altogether, the Uses and Gratifications model outlines the many reasons we have for using the mass media, and the kind of functions that the media can play within our lives.