Potato Crisps - A History Content from the guide to life, the universe and everything 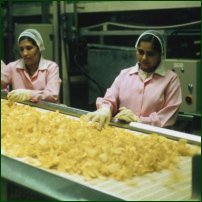 George Speck, the father of the potato crisp, was born in 1822 of a Native-American mother1 and an African-American father. His father was a jockey and when George grew up he took his father's professional name, which was Crum. Following early career moves as a tracker and trader, Crum eventually found his niche in life as a chef. George Crum was what his countrymen would call 'ornery' and in a fit of pique one evening in 1853, he invented what could arguably be called the Western world's favourite snack.

Crum was a chef at Cary Moon's restaurant in Saratoga, New York. He had a bit of a reputation for being bad-tempered and diners were generally loathe to return food to his kitchen because of this. It was rumoured that, should a meal be returned to Crum, it might have been replaced with a better meal but was just as likely to be sent back even more inedible than it had been in the first instance. Diners saw Crum as a challenge and while some would storm out in protest at his behaviour, others would try to test his patience.

One evening, a particularly hard-to-please customer returned his French fries because they were too thick. Crum tried again to prepare the perfect chip and it was again returned as it was too thick. When the meal had been sent back to the kitchen for the third time, Crum decided to cut the potatoes so thinly that they couldn't be pierced by a fork and to overdo the seasoning just enough to choke the diner. To Crum's surprise, the diner was delighted and ate the lot.

George Crum had presented the world with the first potato crisps. They were put on the menu of Moon's Lake House and soon became a local delicacy known as Saratoga Chips2. Before very long, they were being served at all the best restaurants.

Some years later, William Tappendon took up the marketing and manufacture of crisps and is credited with taking crisps out of the restaurant and into the grocery shop. In 1895, Tappendon first made his crisps in the kitchen, but due to demand turned his barn into the world's first potato-crisp factory. Tappendon sold his crisps to local grocers in Cleveland, Ohio, and crisps were on the move.

By the mid-1920s, crisps were turning into big business in the United States. In the early years, they were sold in paper bags from large bins in the grocery stores. The crisps at the bottom of the bin weren't usually very crispy at all by the time the grocer sold them, a problem solved by the next great innovation. In 1926, Laura Scudder, who worked in her family's crisp business, hit on the idea of selling the crisps in sealed bags. Scudder had her staff iron waxed-paper sheets into the shape of a bag and, ingeniously, iron-seal the top of the bags when full. The packet of crisps was born.

The first British potato crisps were manufactured by a man called Carter in 1913. He reputedly discovered them in France, not the US, but they weren't available to the masses until Smiths Potato Crisps Company Ltd formed in 1920. Smiths was another family business. Mrs Smith washed, cut and fried the potatoes in the couple's North London garage. Frank Smith packaged them in greaseproof paper bags. The crisps were then sold from his pony and trap around London. He would also include a twist of salt3 for flavouring. Crisps were so popular that within a year, the couple had to move to larger premises and employ 12 staff members.

Smiths felt the pinch during the Depression and Frank Smith left the country to expand his business in Australia. Things didn't look good, though, when the company went into voluntary liquidation in 1932. This could have been the last we heard of Smiths Crisps, were it not for Smith's friend and colleague George Ensor. Ensor purchased the company three months later and Smith's Crisps (Australia) were born - the leading shareholder was Smiths Crisps UK Ltd.

The company thrived and during World War II it was rumoured that little blue bags of salt weren't the only things found in Smiths crisps. Apparently, the women packing the crisps would also sometimes pack little pieces of paper with their names and addresses on them to draw the attention of any lonely soldiers. Following the end of the War, production at Smith's had to be increased and crisp factories as we know them today began to take shape.

Henry Walker was a very successful pork butcher from Mansfield. He moved to Leicester and eventually London. Things began to go wrong for Walker during the War - due to rationing, Walker's shop was picked dry by 10am each day. Things were getting tight for the small business. Henry and his managing director RE Gerrard realised that diversity was needed. Since potatoes weren't rationed, crisps could be the future of the business. Facing bankruptcy in 1948, the ready workforce went into production in the upper floor of the meat factory at Oxford Street, Leicester and Britain's most popular crisp went into production.

In 1947, a Scottish baker, William Alexander, was having similar thoughts about potato crisps and started to produce them when he had completed his early-morning baking shift. William named his crisps after the Golden Wonder potato, originating from the Arbroath area in Scotland. Golden Wonder was the first company to produce ready-salted crisps and dispense with the need for the little blue bag. They were also the first crisp company to introduce 'proper' flavour to crisps, with cheese and onion in 1962.

Crisps didn't make it to Germany in a commercial sense until 1951, when Heinz Flessner started the Stateside Potato Chip Company with his wife Ella. The Flessners' market was mainly American soldiers based in Germany. Flessner packaged his crisps in glassine bags and hand-delivered them to US Army Post Exchanges. Within a decade, Flessner had two factories operating full-time and was well-established in the consumer market.

Heinz was a shrewd businessman and he arranged a meeting in Frankfurt with his American, British and Swiss associates to form an alliance. The Frankfurt Convention was historic: it was at this meeting that Flessner, Harvey Noss (USA), David Sword (UK) and John Zweifel (Switzerland) won approval for a European regional affiliate, which in 1956 became the European Snack Association, a trade association solely for the purpose of advancing savoury snacks.

In the 1950s, crisp packets were none too reliable when it came to sealing in freshness. In order to combat this and keep the crisps crisp, the manufacturers packed them in sealed crisp tins. This practice continued until the manufacturers solved the problem in the early 1960s, just in time for the launch of flavours.

When Golden Wonder introduced cheese and onion-flavoured crisps in the 1960s, the floodgates were opened and every crisp manufacturer began to search for the perfect flavouring for their crisps.

The ensuing search produced some popular results, including smokey bacon, prawn cocktail and Smith's response to Golden Wonder, salt and vinegar. The crisp market in the UK became increasingly competitive in the 1960s and 1970s, producing some very interesting flavours for the delectation of an increasingly demanding market. Such gems as tomato ketchup, Worcester sauce, Branston pickle and sausage4 flavour have been fed to the masses over the years, but the most outlandish flavour ever has to be hedgehog.

Yes, in 1981, Welsh pub-owner Philip Lewis began the manufacture of hedgehog-flavoured crisps. Lewis allegedly interviewed travelling gypsies, who apparently enjoy the occasional baked hedgehog, and took their advice on the taste and flavourings required. While the flavour did catch on, Lewis had to change his advertising from hedgehog 'flavoured' to hedgehog 'flavour' due to advertising standards, as the crisps did not actually include any hedgehogs. He later admitted that the hedgehog crisps were a faux pas.

Walkers are today's market leaders in the UK, with sales topping an amazing £480million. Their good fortune arose from their simple non-compliance with the industry norm. The crisp industry had a 'gentleman's' agreement which ensured their flavours would be easily recognised. For example, ready-salted crisps were sold in dark blue packets, salt and vinegar in light blue and cheese and onion in green. Walkers decided to throw the cat among the pigeons in the 1980s when they relaunched their product; they changed the colour of their packets to blue for cheese and onion and green for salt and vinegar. The resultant confusion led to a great increase in their sales of salt and vinegar. This was capitalised on by the recruitment of Gary Lineker in the 1990s to appear in their commercials. He appears as the face of Walkers crisps even today, amid the outrage about sporting heroes advertising 'junk' foods.

Research has shown crisps to be of low nutritional value and high in fat and salt. While they are not recommended as a daily staple, they do seem to have become something of a lunchbox snack for school children. The British government was so concerned about our appetite for the crisp that a major advertising campaign was launched in an attempt to curb our enthusiasm. On billboards across the country, a poster of a child drinking a five-litre bottle of oil with the tag 'What goes into crisps goes into you' was hoped to discourage the parents of the children5 who consume a packet a day.

With the rapid rise in popularity of the crisp, many additives such as food preservatives, artificial colouring and flavouring have become the norm. In an industry which produces goods around the clock with the emphasis on quality and flavour, a new trend is emerging. There has been an unexpected rise in interest and demand for hand-made crisps. The new hand-made crisps are free from the additives of the factory-produced items. This makes for easier marketing and a certain superiority over the mass-produced item. George Crum would surely be proud.

To reflect the higher quality and price of hand-made crisps, the flavours do not include sausage and tomato or scampi. For the more refined palate, there are lamb and mint sauce, maple-smoked barbecue and seasonal delights such as blue stilton and port and cranberry, sage and thyme6. These crisps are available alongside the factory crisps at major supermarkets. Manufacturers of hand-made crisps, such as Kettle Foods Ltd, are going even further in providing an organic range, with organically-grown potatoes fried in virgin olive oil - organic crisps for the new generation of more discerning customers.

There is no doubt that the major crisp manufacturers will fight back with renewed advertising and the development of 'healthier' crisps, but in the meantime, a little of what you fancy does you good.

1 She was a member of the Huron tribe.2Crisps have always been known as chips in the US.3A little piece of blue paper containing a drop of salt and twisted to seal.4An h2g2 Researcher claims credit for suggesting this flavour to the Golden Wonder company around 1988.5It is estimated that almost half of UK children eat a packet of crisps every day, which translates (according to the government) to five litres of cooking oil per year.6Not to be confused with the Walkers Merry Crispmas range, which includes roast turkey with Paxo sage and onion flavour.