Forks Content from the guide to life, the universe and everything 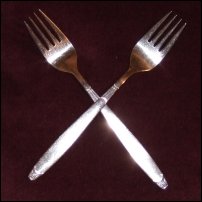 A fork is a hand tool used for transporting things. Small forks are used to transfer food to the mouth. Larger forks are used to move other things, and to break-up clods of soil. Here we will deal mostly with the small, food-moving kind, but most of the description is valid for forks of all kinds.

For ease of reference, anything that is picked up with a fork will be referred to as stuff.

Structure and Method of Use

A fork is usually made up of two parts, the head and the handle.

The handle is designed to allow the user to move and apply pressure to the head of the fork in comfort, and so is usually reasonably rounded and of a size which is easily held in the hand. Some forks have their blade and handle made out of the same material, eg wood or metal. Many use different materials, as the differing desired characteristics of blade and handle can often be best met by two different materials.

The head of a fork is made up of a number of prongs, more properly called tines. These are a set of parallel spikes designed to be pushed into stuff. The narrowness of the individual tines gives a very high effective pressure (force per unit area) at their tip with a relatively modest application of force. This pressure causes stresses in the stuff and the bonds between its molecules to break, allowing the movement of the tines into the body of the stuff.

Once the tines are embedded in the stuff, friction tends to keep them there, and it effectively becomes part of the fork. It can be manipulated, dipped in gravy or other substances, and brought to the mouth, without the hand of the user having to make direct contact with the stuff, nor with the gravy, nor with the other substances. The need for friction to secure the stuff makes the movement of liquids using a fork an inefficient process.

In manipulating food, the fork is often used in conjunction with the knives, providing lateral stability for the stuff being cut.

The fork is versatile in that as well as the spearing method of securing stuff, it can also be used in a similar manner to a spoon, being used to scoop up solid stuff using the curve of the tines to hold the stuff. Certain users, notably British ones, tend to pile stuff on the back of the tines, ie on their convex surface, often with the aid of mashed potato and gravy. This can provoke amazement in less dextrous fork users.

The best number of tines in the head of a fork is determined by a number of variables, and the optimal value depends on the use to which the fork will be put.

A fork with a single tine is not, technically, a fork, but is a spike. Spikes are little used for manipulation because, though easily penetrating the stuff, they provide too little friction to allow the reliable movement of the stuff without it falling off. The spike can be inverted to mitigate this problem, but the stuff can fall of during the act of inversion, and having to keep the spike inverted is inconvenient and messy. Also, a spike does not prevent the rotation of the spiked stuff, as it only has a fixed relationship with the stuff about its own long axis. This is a severe problem as it makes cutting stuff difficult and can lead to gravy problems.

A modified spike, deformed along its long axis to provide an automatic and permanent inversion is widely used for other purposes, and is called a hook.

A two-tined head is still easy to push into the stuff, offers more (but still limited) friction, and (like all higher numbers of prongs) prevents the rotation of the stuff so long as the fork itself is not allowed to rotate. Two-pronged forks are often used specifically to hold stuff against a cutting surface whilst a knife is used. This mitigates their inherent lack of friction, but the cut stuff is usually subsequently moved using both the fork and the knife together, as the two-tined fork is unreliable for this purpose unassisted.

Three tines still allow easy entry into the stuff, offer better friction and prevent rotation. They suffer from the disadvantage that the tines are widely spaced, and thus prone to stick into the tongue if used without the required degree of attention. Three pronged forks are not unknown, and offer a slight advantage in simplicity of construction relative to the four-tined fork. The central prong is often an extension of the handle or that piece of the head support which fits into the handle (the shank or tang). Toasting forks often have three tines. The horizontal orientation of this type of long-handled fork, in use, makes its lack of friction less relevant, though the tines are often slightly bent to prevent loss of toast. The three tined toasting fork makes toast with slightly better butter retention than a four-pronged one.

Most forks have four tines. This gives them good penetrating power, good friction and good rotation control. The tines are not too widely spaced, making them tongue friendly. Four tines appears to be the optimum number for most applications, given the constraints imposed by the uses to which forks are put and the materials from which they are commonly made.

Forks with higher numbers of tines start to loose ease of penetration as the force applied by the user is spread out among more tines, reducing their effective individual pressure on the stuff. This means that they need to be sharper to match the penetrating power of, say, a four tined fork. This makes them less friendly to the mouthparts. Given the limit in head width imposed by the typical human mouth, forks with many tines tend towards having the effect of a cutting tool or chisel, which does not perform in a sufficiently fork-like manner.

Once at the mouth, the friction holding the stuff on the head must be overcome to allow the stuff to be released. The required force is usually applied by inserting the head of the fork into the user's mouth, closing the lips around the stuff, and withdrawing the fork whilst retaining the stuff in the mouth.

There are many forms of fork, each suited to their task and shaped by thousands of years of design based on the experiences of their users and makers. New materials continue to extend the possibilities of fork design. The story of the fork is not over yet. Oh no.