The Ebbelwei-Express - An Unusual Tram in Frankfurt am Main Content from the guide to life, the universe and everything 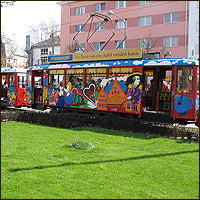 Ebbelwei or Ebbelwoi1 are the Frankfurt dialect names for Apfelwein, which translates as 'apple wine'2.

The Ebbelwei-Express is a special tram which runs through Frankfurt am Main, Germany. It's a traditional tram which carries tourists and locals through the city letting them sightsee and drink Ebbelwei, Apfelsaft (apple juice) or mineral water, eating pretzels and listening to folk and schunkel3 music.

The Ebbelwei-Express was opened on 5 February, 1977. It uses the old k-style double-axle, which has been in service since 1949. The last regular tram of this series was replaced in 1978. The newly-created and specially-painted Ebbelwei-Express was also due for replacement. However, due to its huge success, it was reprieved and is still running today - after 30 years - and will probably continue for years to come.

Currently there are four Ebbelwei-Express trams and six carriages in service. The trams are still the k-series type.

The starting point is at Frankfurt Zoo.The tour goes through the Old City, passing the Römerberg, Paulskirche, the Hauptbahnhof (main station) and the Messe. It then goes back along Hauptbahnhof, crossing the river Main and travelling through Sachsenhausen (famed for its apple wine taverns), back over the Main to the zoo.

The tour takes approximately one hour. One beverage (apple wine, apple juice or mineral water) and one small bag of pretzels are included in the price.

The Ebbelwei-Express can be chartered for groups, and tours other than the fixed one can be chosen. During a private tour you can watch members of staff leave the tram now and again to manually adjust the points4.

A regular service runs every 35 minutes between 1.30pm and 5.30pm on Saturdays, Sundays and most public holidays.

The Ebbelwei-Express can be chartered at times that fit into the schedule drawn up by the VGF (Verkehrsgesellschaft Frankfurt am Main mbH, translated as the Frankfurt Transport Authority).

At the time of writing5, prices are as follows:

This costs €77 plus VAT6 per hour and includes a tram with 22 seats and standing room for eight people. The minimum rental period is two hours. More details are available at the Ebbelwei Express official website.

1Pronounced: Ebblvoy (Spelling varies, being an example of dialect). Another common expression is Äppler.2This is comparable to 'real' cider.3Schunkeln (Pronounced: shoonkln) is the dance that two, or preferably more, people do to German 'Oompah' music. It involves swaying left and right to the music in 6/8 time - sway left, two, three; right, two, three - linking arms and holding your beer mug in front of you. This is a traditional German dance that often takes place at a fest, for example Oktoberfest in Munich.4The mechanisms that enable trams and trains to change from one rail to another.5February, 2006.6This was 16 per cent at time of writing.