Blue Cheeses - a Taster Content from the guide to life, the universe and everything 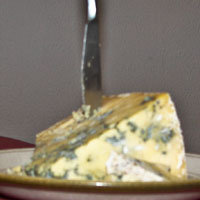 To many, there are few things more satisfying to the taste buds than blue cheese. Now, you may be aware of blue cheese as a component in salad dressing, and perhaps have had it crumbled over a steak, but very few people are aware of the subtle variations of blue cheese available .

What is Blue Cheese?

Simply put, blue cheese is any cheese with a bluish mold purposely grown on the cheese as it is aged. Blue cheese is traditionally aged in caves, where the mould lives, for a few months to over a year. There is a distinctive 'musty' smell associated with various forms of blue cheese, and blue cheese is usually a 'soft' cheese, which can be served dried or moist.

While many use the two spellings interchangeably, technically, a bleu cheese is aged in France. Some excellent Blue cheeses are made in countries across the world, including Europe and the United States. Generally, if it is not made in France, it's a blue.

There are many variations of this luxurious food. The cheeses are generally named after the region in which the cheese is aged.

As stated before, your standard 'blue' cheese can be made just about anywhere. Due to the organic nature of the aging process, a cheese labelled 'blue' can vary quite a bit. An excellent blue will be moist but not soggy, be squishy and crumbly to the touch, and emit the trademark musty smell. The cheese should be white with greenish-blue molding. The taste is salty to the tongue and a bit bitter to the palate. If your cheese smells of ammonia, it is generally inedible, although it will do you no harm.

Stilton is a blue from England. It is drier than a standard blue, and its coloration a little yellower. Because of its hardness, it is usually not sold crumbled but in a wedge or wheel. To the taste, the molding is a bit sweeter, the cheese a bit more bitter than standard blue. The odour is also a little 'funkier1.' than the standard blue.

Double Gloucester is also an English cheese, and unique in that it incorporates a blue-like cheese with a harder, cheddar-like cheese. The two tastes combine to make a unique concoction that will appeal to many cheese lovers. The taste is a combination of the blue and cheddar, and smells likewise.

The king of blues is 'Roquefort'. Made only in the Roquefort region of France, this excellent cheese is truly the food of the Gods. Roquefort has an especially salty taste, and is best served very moist. Roquefort is an acquired taste, and is the most expensive of the blues, sometimes costing more than $8 a pound.

How to Enjoy Blue Cheese

Blue cheese is excellent served crumbled over any meat, or a fillet of white fish. Crumble it over baked potatoes, sprinkle it on a wedge of lettuce with chopped bacon, or even on a hamburger. A traditional method of consumption is simply with a glass of port or a hearty Burgundy. Anyway you decide to enjoy it, give yourself the time to enjoy the odour and texture of each bite.

1American English has at least two meanings for the word 'funky'. One of which denotes a certain James Brown papa's-got-a-brand-new-bag-git-up-on-yer-good-foot groove factor. The other means 'smelly'.