Jacket or Baked Potatoes Content from the guide to life, the universe and everything 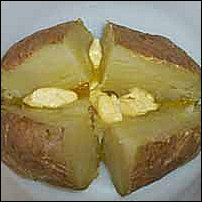 Probably one of the most deliciously simple dishes ever to come out of the kitchen, the jacket potato has become one of the most popular dishes on earth. Usually, any place where food is served will provide a well-cooked and well-filled jacket potato; but avoid eating them at any school/college/university canteen as they have been mass prepared and certainly lose some of their appeal.

First, select a large potato, such as a King Edward. Then, take a skewer or another sharp-pointed instrument, as long as it's clean, and prick the surface of the potato gently.

To check if the potato is done, gently stab it with the skewer; if it feels soft, it's done; if it's hard, come back later. If it's mushy, throw the potato away and get your mother to cook them next time.

Put the potato on a microwave-proof dish, put the microwave on to full power, and cook the potatoes (one at a time) for 8 - 10 minutes each. Microwaved potatoes are hot. Very hot. Always wear oven gloves if you want to handle them.

Any jacket potato must be filled, otherwise it wouldn't be a jacket potato. Anything can be used for a filling... and be adventurous; but remember, you are going to have to eat the end product. Once you have chosen the filling, simply split the potato into two lengthways; spread a little butter over the insides of the potato, and pour the filling over the top. An alternative method is to scoop out the potato from the skin, and mash it up with the filling, before scooping it back in. This method is particularly favoured by children.

Here are some favourite fillings to make the perfect jacket spud: