There's no such thing as an election without rumour, scandal, and downright lies. Here's the latest news from the campaigning front.

The big count and post poll party has already started in the Concert Room of the Flat Cap & Muffler Sports & Social Club. Get yourself over there and enjoy the fun!

A winner has now been announced. See The Results here. 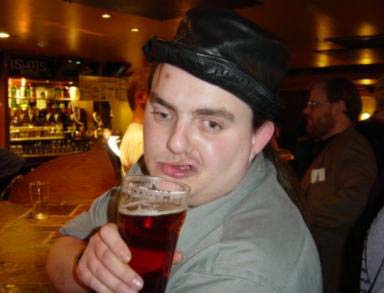 It seems that ever since last weekend's incident involving some incorrect choices when it comes to manifesto writing, the Monster Raving Badger Party and it's leader 2Legs (pictured left) are lurching from one disaster to another. Not content with losing his running partner to a breakaway party and the badger vote to a rival, his first lady Lil Ol' Me has left him for new rival, Jack. Both Lil and Jack have so far declined to comment.

Left with a plumetting opinion rating, 2Legs may either be going out in an alcohol fuelled blaze of glory in his usual style, or stand as vice president of his own party with pseudo-deity Nighthoover as Premier. As is usually the case with 2legs, both are almost certainly going to happen sooner rather than later. 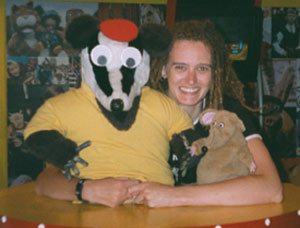 With the Monster Raving Badger Party still recovering from yesterday's revelations, Mina (pictured right), leader of the I Haven't Got Time For This Party managed to find some time in her busy schedule for canvassing the badger minority vote. It's widely believed that these handful of votes will be the key to success for whoever manages to secure them. Rumours of whether Mina is pledging to supply free instant mashed potato to all badgers upon her appointment as Premier have yet to be verified.

All round good egg Hypatia and her Ozark party may have a hidden agenda with regards to the race for Presidency of h2g2. According to the alternative dictionary "The Deeper Meaning of Liff" by Douglas Adams, Ozark is defined as "One who offers to help just after all the work has been done". Vice presidential candidate Jodan flatly denied the definition, claiming in fact that Ozark is nothing more than a mountain range. More speculation of underhand tactics abounded with The Evil Army announcing their full support behind Ozark, as claimed by Evil Army spokesperson Commander SuperMoo. The move could provide Ozark with enough military might and the time machine required to start a bloodless coup of the previous administration five years ago, as well as preventing the H2G2 Anonymous scheme from ever being founded.

MRBP breakaway party They're Not People They're Hippies, headed by Serephina appear to really the They're Not People They're Lunch party. First on the menu is her Minister of Pizza, Footbacon, who has literally become Minister on Pizza, to served to the Returning Officer as a bribe. When asked what she thought about this, Footbacon nervously said "I'm thinking of defecting to Reddyfreddy". Serephina attempted to complete the brainwashing of Footbacon by persuading her that Reddyfreddy didn't have a catchy jingle and was too obsessed with hegemonies, but it was cleverly thwarted with a well timed reference to Serephina's choice in underpants. The Returning Officer has yet to receive his Footbacon pizza.

Monster Raving Badger Party candidate and "king" of h2g2, 2Legs sent shockwaves through his own campaign and the community yesterday by apparently promoting the burning of witches as an election pledge. His running partner, Serephina who is a respected expert in the field, resigned her post and formed the They're Not People They're Hippies party in retaliation. A spokeperson for the Monster Raving Badger Party has so far declined to comment.

Have you got any gossip or dirt to dig up on any of the candidates? If so, post it in the forum below.