The Ultimate DisneyToon Studios Animated Film Guide: 2010-2015 Content from the guide to life, the universe and everything 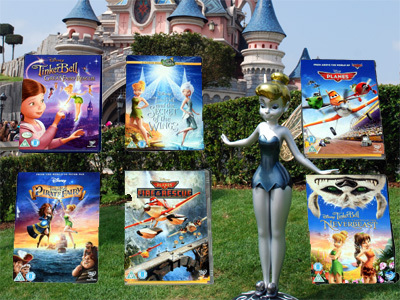 DisneyToon Studios was the second animation studio founded by the Walt Disney Company organisation. Unlike the prestigious Walt Disney Animation Studios, DisneyToon Studios dealt with low-budget animated productions which often had limited cinema or direct-to-video releases. It had been founded in 1990 as Disney MovieToons with the aim of adapting Disney's popular television cartoon series, made by Walt Disney Television Animation1, for the big screen. It involved teams of animators in Disney-owned studios based all around the world2.

It soon began churning out sequels to many of Walt Disney Animation Studios' most successful films. Although animated films are by their nature a commercial art form, the studio, renamed DisneyToon Studios in 2003 and placed under the control of Sharon Morrill, soon gained a reputation for emphasising commercial success to the point that the artistic merit of what was released was considered irrelevant. They even released Disney Television Animation's half-finished abandoned projects, leading to further criticisms and associations of poor quality with the Studio's outputs.

Disney acquired a more prestigious animation studio following the merger with Pixar in 2006. This merger led to Pixar's John Lasseter becoming Chief Creative Officer of Pixar and Walt Disney Animation Studios. In 2007 he also gained control over DisneyToon Studios after the film Tinker Bell's budget spiralled out of control and led to Sharon Morrill being fired. He believed DisneyToon Studios should develop their own identity and their policy of making sequels to classic films was demeaning and detracted from the originals. By 2010 only the Tinker Bell series remained, although plans were underway to develop a second series loosely inspired by Pixar's Cars films.

This is the only film in the series not to be set in Pixie Hollow. It would appear that the Griffiths live southeast of London, but London looks quite small with Big Ben being near the countryside. Dr Griffiths, despite being an English character, uses Americanisms such as 'trunk' rather than 'boot'.

Another highly enjoyable entry in the Tinker Bell series, concentrating on the value of friendship, and unifying in the face of adversity. There are some enjoyable touches, with Scribble the librarian fairy facially resembling Stephen Hawking while the Keeper looks just like Einstein. Megan Hilty replaces Kristin Chenoweth as Rosetta.

This story was based on an idea by John Lasseter, the writer-director of the first two Cars films. Set in the same world, the film follows the same basic plot as those films, featuring a race with the hero facing an arrogant opponent. Brent Mustangburger had appeared in Cars 2 as the race commentator, while Skipper and Sparky had appeared in 'Air Mater', an episode of Cars Toons: Maters Tall Tales.

Although the plot is incredibly predictable, there are still plenty of details to pick up on. The characters played by Val Kilmer and Anthony Edwards were based on their characters Goose and Ice Man in Top Gun. In the Iceland to Germany section of the race the aircraft fly through Neuschwanstein Castle in Bavaria, which inspired the appearance of the Disney Castle. Also many of the clouds and landscapes in the background appear in the shape of different aircraft.

The film was so successful at the box office that it was the eighth most successful animated film of the year5.

This enjoyable film contains numerous links to Peter Pan, including Hook, Smee and the Tick-Tock Croc. This is a bit confusing as the first film in the series, Tinker Bell, featured Wendy only a few years younger than when she was seen in Peter Pan, yet Hook here in this film set later is roughly 20 years younger. Fairy characters that appeared in previous films in the series can be seen attending the Four Seasons Festival. Another reference is to The Wizard of Oz where, like in this film, poppies put people to sleep.

Also called Planes 2: Fire and Rescue, this is a better film than the first, having a more original plot that doesn't copy the first two Cars films. That said, the plot of the heroic racer crashing and coming to terms with choosing an alternative career would feature in Cars 3 (2017), which does it much better.

Like the original, this made the top ten most successful animated films of the year, coming eighth6.

This was not expected to be the final film in the series, or indeed the final DisneyToons Studios film, as another Tinker Bell and Planes film were in development. This is the only film in the series not to concentrate on Tinker Bell, instead focusing on her friend Fawn, who is now played by Ginnifer Goodwin, the third actress to voice her. Many of the regular Tinker characters such as Fairy Mary, Bobble and Clank do not appear either.

Despite many of the films having a short cinematic run, the majority of DisneyToon Studios' income was from the home entertainment market and video (DVD and Blu-Ray) sales. Although new films in both the Tinker Bell and Planes series were planned, Disney announced in June 2018 the immediate closure of DisneyToon Studios, with 75 animators and other staff losing their jobs. The reason given was the decline of home video sales since the rise of online video streaming services. Although Disney Television Animation would continue making occasional feature-length direct-to-video films, it was felt that having an entire animation studio dedicated to this declining area was superfluous, especially as Walt Disney Animation Studios had embraced the concept of making sequels to their films, making Ralph Breaks the Internet (2018) and Frozen 2 as big budget official films rather than low-budget, lesser releases.

Also in mid-2018 it was announced that Walt Disney intended to acquire 21st Century Fox, including Blue Sky Studios, the animation studio most famous for the Ice Age series. This deal was finalised in 2019. Disney being set to acquire another prestigious animation studio was another reason for no longer needing DisneyToon Studios.

There was an additional factor in the Studio's closure. John Lasseter had fully supported the continuation of both the Planes and Tinker Bell / Disney Fairies series. In late 2017 he admitted sexual misconduct7, resulting in an initial six month leave-of-absence followed by an announcement that he would step down at the end of 2018. It was no longer considered appropriate to continue to support projects such as Planes and Tinker Bell that he was closely associated with. He was replaced as Chief Creative Officer at Pixar by Pete Docter, who had directed Monsters, Inc (2001), Up (2009) and Inside Out (2015), while Jennifer Lee, writer/director of Frozen (2013), was appointed Chief Creative Officer of Walt Disney Animation Studios.

1Walt Disney Television Animation was renamed Disney Television Animation in 2011.2Disney Animation Australia, Disney Animation France also known as Disney Animation Paris, Disney Animation Japan and Disney Animation Canada.3There are different video standards – NTSC in America, which has 525 scan lines and 30 frames per second (fps) and PAL in most of Europe (except France, which uses SECAM) with 625 scan lines and 25fps. When converted from film NTSC duplicates every fourth frame to compensate for the higher frame rate while PAL does not, meaning that unedited films released in Europe are 4% shorter than the same unedited film in America; a film with a 100-minute runtime in the US is 96 minutes long in Europe.4The extras on the Tinker Bell DVDs state that male fairies are called 'Sparrowmen', but this is never mentioned in the films themselves.5After Disney's Frozen, Illumination's Despicable Me 2, Pixar's Monsters University, DreamWorks Animations' The Croods and Turbo, Sony Pictures Animations' Cloudy with a Chance of Meatballs 2 and Blue Sky Studios' Epic6Following Disney's Big Hero 6, DreamWorks Animation's How To Train Your Dragon 2, Blue Sky's Rio 2, Animal Logic's The Lego Movie, DreamWorks Animations' Penguins of Madagascar and Mr Peabody & Sherman and Shin-Ei Animation's Stand by Me Doraemon.7Lasseter admitted he had on numerous occasions grabbed, kissed and made inappropriate comments regarding female members of staff, often, but not always, following the consumption of alcohol.