The Ultimate DisneyToon Studios Animated Film Guide: 2006-2009 Content from the guide to life, the universe and everything 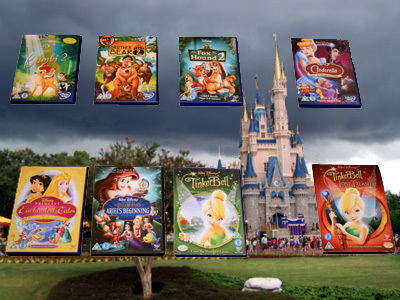 Between 1990 and 2015 the Walt Disney Company had two animation studios using the Disney name. The prestigious Walt Disney Animation Studios, the one everyone remembers, makes films classed as 'Walt Disney Classics', while the other animation studio, DisneyToon Studios (headed by Sharon Morrill, the most senior woman at Disney) both adapted Disney's popular television cartoon series and made direct-to-video sequels to Walt Disney Animation Studios films. Occasionally their films were released in cinemas.

In the early 2000s, Disney seemed to have lost direction. Many of Walt Disney Feature Animation's films had flopped, including Fantasia 2000 (2000), Dinosaur (2000), Atlantis: The Lost Empire (2001), Treasure Planet (2002), Home on the Range (2004) and Chicken Little (2005). Rather than making sequels to Disney's recent financial failures, DisneyToon Studios had instead turned to making adaptations of Disney's earlier, successful films. This had attracted criticism from those who felt that making a sequel 50 or 60 years later without any involvement from those who had made the original film cheapened, exploited and detracted from the original.

Making a successful animated film is a commercial art form. While the Walt Disney Animation Studios' prime purpose is to make a profit, it has also continuously pushed the boundaries of what is possible in animation. DisneyToon Studios' focus, however, seemed purely commercial to the total exclusion of the art. Particularly as its President Sharon Morrill had a background in business, not art or animation.

Below is a summary of the films made by DisneyToon Studios during this period. Recurring characters and actors are shown in Bold. Please note that Disney use both numbers and Roman numerals interchangeably, so that a film titled 'II' on screen may have '2' on the front cover of home media releases and vice versa. Also mentioned is whether the films pass the Bechdel Test (this can be summarised as whether the film involves two or more named female characters who have a conversation together that does not include or mention any male characters). The film's European runtime is also included1.

Also known as Bambi and the Great Prince of the Forest, this is a sequel to Disney's third flop. The film is not based on Bambis Kinder: Eine Familie im Walde (Bambi's Children: The Story of a Forest Family), author Felix Salten's 1939 sequel to Bambi.

The original Bambi was rush-released during a financial crisis at Disney. Approximately ten minutes' worth of story was never completed and, in the scenes that were rush-finished, the eye and skin colour of several characters including Thumper's sisters and Faline change from scene to scene and even during scenes. This makes Bambi II one of the few DisneyToon sequels to be technically superior to the original film. Many of the cut scenes were included in this film, which is technically a midquel2 to the original. Some of the original oil-painting backgrounds were scanned into a computer and re-used.

Despite the original story's setting in Austria, Disney populated the forest with animals more familiar to American audiences. Bambi is shown as a white-tailed deer rather than a roe deer. Although Patrick Stewart steals every scene he is in, one cannot help but wonder how the film would be had it starred a genuine Austrian actor instead, such as Arnold Schwarzenegger. On release, Bambi II held the record for the sequel released the longest after the original, being made 64 years after Bambi. Patrick Stewart was the only actor in this film to have been alive when the first film was released. It has the distinction of being both the last Disney film and the last animated film to have a VHS release.

This film is particularly suitable for very little children but is unlikely to entertain older children for long.

Joaquin Phoenix chose not to return to play Kenai. This is one of only two DisneyToon Studios films in which the sequel has a higher rating than the original on film website Rotten Tomatoes3. Although the standard of animation is much lower than that of Brother Bear, the story is much more engaging. The cast also impressed Disney officials enough for Patrick Dempsey to be cast as the main male in Enchanted in 2007 and Mandy Moore would play Rapunzel in Tangled (2010).

This film has quite an impressive soundtrack, which was recorded in Nashville, Tennessee. This was the last Disney film to use the 'Walt Disney Pictures' stripy castle on a blue background logo first introduced on The Black Cauldron (1985). The Grand Ole Opry is a real Country and Western radio programme in Nashville.

A strong improvement on the weak Cinderella II: Dreams Come True (2002). The film enjoys the same cast. Prudence, who was introduced in Cinderella II, appears in this film and the baker that Anastacia is in love with appears as a picture in the end credits, but this film does not appear to be a direct sequel to the second film. This was the last film made at Disney Australia's studio before it closed.

This was intended to be just the first in a whole series of Disney Princess Enchanted Tales videos; however, executive John Lasseter cancelled them, despite a trailer promoting the next one, showing Belle singing to Chip, being included on the DVD release. From the quality of this film it is not difficult to ascertain why the tales were cancelled, featuring as it does two shorts with the same moral message repeatedly reinforced with the subtlety of a sledgehammer. The first half's plot is identical to part of Cinderella II: Dreams Come True in any case.

The Aladdin segment does feature three of the original voice cast: not only the original artists behind Jasmine and Iago but also Frank Welker who played both Abu and tiger Rajah. Corey Burton, who had briefly appeared as Prince Achmed in Aladdin, plays Aurora's father King Stefan.

Known also as The Little Mermaid III and The Little Mermaid: Ariel's Beginning, it tells the story of how Ariel restored music to the kingdom of Atlantica and reveals a little about Ariel's mother, who is the spitting image of Ariel herself. Most of the voice cast from the original film returned except Kenneth Mars, who had pancreatic cancer, was replaced by Jim Cummings as Triton. Ariel's sisters have a larger role than in previous films. Tara Strong, who had played Ariel's daughter Melody in The Little Mermaid II, plays Adella and Andrina while Grey DeLisle is Aquata and Arista.

This was Peggy Holmes' first full film as a director, although she had directed some of the 'Belles on Ice' segment in Mickey's Twice Upon a Christmas (2004). She had previously worked with Disney as an actress, dancer and choreographer and had never animated, but her experience as a choreographer was considered invaluable for the numerous dancing sequences. This was DisneyToon Studio's last sequel to a classic film.

Only Tinker Bell appeared in previous films. Characters and actors in Bold would appear in later Tinker Bell films.

Tinker Bell is an amusing and heartwarming film that would change DisneyToon studios forever - it was to be the first film in a trilogy that would launch a whole new merchandise range.

In 2006 Disney purchased Pixar Animation Studios. Pixar's executives John Lasseter and Ed Catmull were appointed to head Walt Disney Feature Animation, with DisneyToon Studios technically outside their jurisdiction. However, Lasseter felt that DisneyToon Studios' output detracted from the original films. He heavily criticised an early version of Tinker Bell in mid-2007. Reportedly it was to be entirely set in modern-day London, but Lasseter declared the film needed a substantial rewrite to become watchable. The cost of Tinker Bell skyrocketed to over $50 million amidst much speculation that the film would be abandoned. After considering Disney's existing vast investment in the Disney Fairies: Tinker Bell series, it was allowed to continue - it was rewritten and the trilogy proceeded.

The expected 2007 release date was pushed back to 2008 and Sharon Morrill was removed from her position. The firing of one of the first female presidents of a major animation studio attracted criticism and so, after a short period in which the studio was run by Disney Studios President Alan Bergman, Meredith Roberts of Walt Disney Television Animation was appointed Senior Vice President and General Manager of DisneyToon Studios in early 2008.

This film features Terence as Tinker Bell's best friend; however, he never features so prominently in any other film in the series. Angela Bartys replaces America Ferrera as Fawn and the Minister of Autumn is now John DiMaggio.

Due to its short cinematic run and being conceived as predominantly a direct-to-video release, Tinker Bell and the Lost Treasure did not make the top ten most successful films of the year list.

In these five years DisneyToon Studios had all-but abandoned cinematic releases but by the end of this time were beginning to find their own identity. John Lasseter made it clear that DisneyToon Studios would no longer make direct-to-video sequels to existing Disney films and cancelled all other sequels that were in various stages of production. DisneyToon Studio's output would be dramatically reduced, but from then on, instead of undermining and exploiting existing films, they would have to establish their own franchises.

1There are different video standards – NTSC in America, which has 525 scan lines and 30 frames per second (fps) and PAL in most of Europe (except France, which uses SECAM) with 625 scan lines and 25fps. When converted from film NTSC duplicates every fourth frame to compensate for the higher frame rate while PAL does not, meaning that unedited films released in Europe are 4% shorter than the same unedited film in America; a film with a 100-minute runtime in the US is 96 minutes long in Europe.2A sequel is set after the original film, a prequel is set before the original film and a midquel is set during, or in the middle of, the events of the film it is based on.3The other being An Extremely Goofy Movie.4Here 'the Mainland' refers to the human world, particularly London, not Lymington, Portsmouth or Southampton as seen from the Isle of Wight.