The Ultimate DisneyToon Studios Animated Film Guide: 2004-2005 Content from the guide to life, the universe and everything 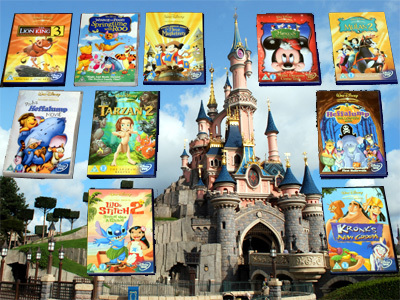 Between 1990 and 2015 the Walt Disney Company had two animation studios using the Disney name. The prestigious Walt Disney Animation Studios, the one everyone remembers, makes films classed as 'Walt Disney Classics'. The second animation studio, DisneyToon Studios, headed by Sharon Morrill, the most senior woman at Disney, both adapted Disney's popular television cartoon series and made direct-to-video sequels to recent Walt Disney Animation Studios films. Occasionally their films were released in cinemas.

In 2003 Disney MovieToons became a division of Walt Disney Features. This decision would mean that only one more of their films would contain material originally made for television and would improve the quality of their output. It was still led by Sharon Morrill. The division gained a new name: DisneyToon Studios. Disney Television Animation continued to release direct-to-video features, but now under their own label.

Below is a summary of the films made by DisneyToon Studios during this period. Recurring characters and actors are shown in Bold. Please note that Disney use both numbers and Roman numerals interchangeably, so that a film titled 'II' on screen may have '2' on the front cover of home media releases and vice versa. Also mentioned is whether the films pass the The Bechdel Test (this can be summarised as whether the film involves two or more named female characters who have a conversation together that does not include or mention any male characters). The film's European runtime is also included1.

Also known as The Lion King 1½, this is a fun, light-hearted midquel2 to the original film. It presents many of the same events from a new, humorous perspective and contains several cameos and jokes. The characters are all voiced by the original actors except Rowan Atkinson does not play Zazu and the young Simba is not voiced by Jonathan Taylor Thomas, whose voice had aged in the previous decade.

What the Dickens? This film is a remake of A Christmas Carol, focussing on Rabbit as Scrooge and with Roo in the role of Tiny Tim. Owl and Christopher Robin do not appear. Nikita Hopkins was replaced by Jimmy Bennett as Roo.

Unusually Mickey, Donald, Goofy: Three Musketeers isn't a spin-off or sequel to an existing film or television series. Instead it was the first feature-length Disney film starring Mickey Mouse, Donald Duck and Goofy3. This also marks a return of Pegleg Pete's wooden leg.

Although a sequel to Once Upon a Christmas (1999) there are several changes: for example Huey, Dewey and Louie live in a different house and Mickey and Minnie's financial situation and homes have completely changed. Jason Marsden replaces Shaun Fleming as Max Goof, who is about ten years older than in Once Upon a Christmas. Kellie Martin, who plays Mona, had previously played Roxanne in A Goofy Movie (1995). Like many Disney films this has a traditional 'book beginning' sequence, but in this case it is a pop-up book.

This is the first computer-animated film by DisneyToon, and except for Mickey and Donald, all the Disney characters appear in CGI for the first time4. Once again there are numerous references to other Disney films, which rewards multiple viewing. 'Belles on Ice' features the alligators and hippos from Fantasia (1940). At the North Pole the SC logo that Huey, Dewey and Louie see had first been used in Disney's The Santa Clause trilogy.

A fairly superfluous film that seems to exist largely to emphasise that Mulan is not a princess by showing the audience three young women who are princesses. The voice cast remains impressive, although Eddie Murphy did not return to voice Mushu as he was under an exclusive contract for DreamWorks Animation following Shrek 2.

This film does not feature Christopher Robin or Owl. Heffalumps had first appeared in the 'Heffalumps and Woozles' song in Winnie the Pooh and the Blustery Day and 'The Horribly Hazardous Heffalumps' song is animated in the same style. One of the Heffalump traps made features a life-ring from HMS Ashdown, named after Ashdown Forest that inspired the Winnie-the-Pooh stories. Despite its cinematic release, it had a disappointing performance at the US box office, being only the 8th highest-grossing animated film of the year5. This led to the next Winnie-the-Pooh film being direct-to-video rather than a cinematic adventure.

This prequel film is known as both Tarzan II and Tarzan 2 and thus is the third film in Disney's animated Tarzan series - feature-length animation Tarzan & Jane (2002) had been produced by Walt Disney Television Animation from three unaired episodes of the series The Legend of Tarzan. Only Tarzan's ape parents are played by the original cast; all other characters are played by new actors. Despite this, Phil Collins again provides the songs.

Lilo & Stitch was one of the few Disney success stories from the first five years of the 21st Century and so was a natural choice for DisneyToon Studios to adapt, keeping most of the original cast although Daveigh Chase was replaced by Dakota Fanning as Lilo.

This film combines the 1996 television special Boo to You Too! Winnie the Pooh with new footage featuring the character of Lumpy. The earlier footage is explained narratively as a tale told by Roo to Lumpy, even though Boo To You Too! Winnie the Pooh did not feature Roo. In the earlier film Pooh said he was scared of Heffalumps as well as Woozles and Jagulars; for this version in which Lumpy the Heffalump is a main character, 'Spookables' was dubbed in.

This film does not feature Christopher Robin or Owl and only briefly features Gofur in the archive footage. The characters in this film are shown drinking cider, or to put it another way, Lumpy downs Scrumpy, despite being underage7. This was the last time Piglet was played by John Fiedler, who had played the role since Winnie the Pooh and the Blustery Day in 1968. As Fiedler passed away before the film was finished Travis Oates recorded the remaining lines. Coincidentally Fiedler died the day after Paul Winchell, the original voice of Tigger.

This is the first DisneyToons Studio direct-to-video film where all the main cast from the original film reprise their role, including John Fiedler as old man Rudy - he died shortly afterwards. Eartha Kitt is a singer who had played Catwoman in the 1967 series of Batman; in tribute her character Yzma had been turned into a cat at the end of The Emperor's New Groove and in this film she appears as part cat, part human. Kronk briefly has his own miniature railway, just like Walt Disney himself.

Over the next few years DisneyToon Studios would continue to make numerous sequels to Walt Disney Animation Studios Classic films. By the end of the decade they would also move away from traditional cel animation and towards computer animation.

1There are different video standards – NTSC in America, which has 525 scan lines and 30 frames per second (fps) and PAL in most of Europe (except France, which uses SECAM) with 625 scan lines and 25fps. When converted from film NTSC duplicates every fourth frame to compensate for the higher frame rate while PAL does not, meaning that unedited films released in Europe are 4% shorter than the same unedited film in America; a film with a 100-minute runtime in the US is 96 minutes long in Europe.2A sequel is set after the original film, a prequel is set before the original film and a midquel is set during, or in the middle of, the events of the film it is based on.3The previous attempt Mickey and the Beanstalk was only half-completed due to Disney's financial crisis and was released with Bongo to make the ninth official Disney Animated Classic, Fun and Fancy Free (1947).4Mickey had appeared in Muppet*vision 3-D (1991) and both he and Donald Duck were in Mickey's PhilharMagic (2003), both attractions at Walt Disney World, Florida.5After DreamWorks' Madagascar, Disney's Chicken Little, Blue Sky's Robots, Aardman's Wallce & Gromit: The Curse of the Were-Rabbit, Laika's Corpse Bride, Blue Yonder Films' Hoodwinked! and Vanguard Animation's Valiant.6Who wears a fishhook similar to Maui's in Moana (2016).7In US English, 'cider' refers to apple juice, whereas in UK English 'cider' contains alcohol. The Winnie-the-Pooh films are set in a fictional version of England.