'The Three Musketeers' - the Disney Animated Film Content from the guide to life, the universe and everything 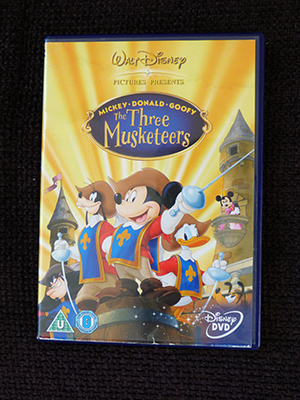 The 2004 animated Disney film The Three Musketeers is the first feature-length movie featuring Mickey Mouse, Donald Duck and Goofy. The three characters had previously appeared together in short cartoons. The idea that Disney could create an animated version of Alexandre Dumas' novel of the same name as a feature length film starring Mickey Mouse had originated in the late 1930s and was finally realised around 70 years later. The movie was a direct-to-video release.

In the film, Mickey, Donald and Goofy are servants to the Musketeers but dream of one day becoming Musketeers themselves. However, their boss is not impressed by how clumsy they are, so promotion seems unlikely. Their chance occurs when Princess Minnie needs protection from kidnappers, but is everything as it seems?

Mickey Mouse plays the role of a small but brave hero. Wayne Allwine provided Mickey's voice since the 1970s until his death in 2009, including in Who Framed Roger Rabbit (1988).

Donald Duck plays the role of a hero who is often too scared to stand with his friends, but has hidden depths nonetheless. Tony Anselmo has provided Donald's voice since the 1980s, including for Donald's appearance in Who Framed Roger Rabbit.

Goofy plays the role of a tall but clumsy hero. Bill Farmer has provided Goofy's voice since the 1980s - he was uncredited in Who Framed Roger Rabbit but appeared alongside Wayne Allwine and Tony Anselmo in the 1987 compilation movie Monster Hits1.

Pegleg Pete, a bear-like cat, is voiced by Jim Cummings, veteran voice actor who has played Winnie-the-Pooh since 1988 but also appeared as Bullet Number 2 in Who Framed Roger Rabbit and had a part in DreamWorks' The Road to El Dorado amongst many other roles. Pete2 plays the role of the heroes' villainous boss.

Minnie Mouse plays Princess Minnie, a sweet yet determined mouse who dreams of finding true love. Russi Taylor came to fame in the 1980s as the voice of Strawberry Shortcake in the animated TV movies about a rag doll and her fellow dessert-inspired friends. She has played Minnie since the 1980s and married Wayne Allwine in 1991.

Daisy Duck plays Princess Minnie's lady-in-waiting. Tress MacNeille has provided Daisy's voice since 1999 but is also known as the voice of other animated characters, including Chip and Gadget in Chip 'n' Dale's Rescue Rangers and Mrs Skinner in The Simpsons.

Clarabelle the cow plays Pete's Lieutenant. She is voiced by April Winchell, who provided the voice of Mrs Herman in Who Framed Roger Rabbit and has played Clarabelle since 1999.

The Troubadour is a turtle who introduces the story and interjects at key points in the movie with music that he plays on his lute. Rob Paulsen, who voiced various characters in Chip 'n' Dale's Rescue Rangers as well as playing Pinky in Pinky and the Brain, provided his voice.

The plot is very loosely inspired by Alexandre Dumas' novel of the same name - in fact we see the comic book that it is based on in the first scene of the movie!

The animation is good - the characters appear just as they have looked since the 1950s, especially the way Mickey's ears face towards the audience even when he turns his head. The film is rated U (suitable for all) - weaponry such as swords and a guillotine appear, but any actual bodily harm is implied rather than seen.

Humour of various kinds is a key feature, from visual comedy such as Mickey losing his Musketeer clothes, revealing his usual red shorts underneath3, to verbal humour such as Daisy innocently saying, 'It's time to cut the cheese!'

The music is an important part of the film - somewhat reminiscent of Fantasia, it mainly4 consists of popular classical themes but with lyrics added by Chris Otsuki. Songs from French Opera feature, as well as other memorable melodies such as Beethoven's 'Symphony Number 5', the 'Blue Danube Waltz' by Johann Strauss II and a medley of music by Tchaikovsky5, with the climax at a performance of The Pirates of Penzance by Gilbert and Sullivan.

The Three Musketeers was released on VHS and DVD in 2004 and appeared on Blu-Ray in 2015. The special features are: a short behind-the-scenes documentary, deleted scenes including an expanded opening sequence emphasising that Dumas' novel is too heavy, hence the comic book was adapted instead, and a commentary on the first few minutes of the film by Mickey, Donald, Goofy and Pete.

Two games are included. 'The Many Hats of Mickey' is an interactive feature in which you can select a hat (such as Mickey's wizard hat from Fantasia) and then see a clip from an original cartoon featuring Mickey (such as Mickey and the Beanstalk or Mickey's Christmas Carol). 'Produce Your Own Opera' invites you to select a scene and pick an opera singer, then the singer sings a song to a popular classical music piece. Fascinatingly this results in scenarios such as a soprano dressed as a pirate singing about cheese, a mezzosoprano dressed as a ladybird singing about homework and a tenor dressed as a knight complaining that his underpants are too tight!

1Monster Hits and Who Framed Roger Rabbit also featured the versatile vocal talents of June Foray.2Pegleg Pete is the oldest Disney animated character - he first appeared as a bear in 1925, three years before Mickey Mouse was animated, and gradually evolved into a cat.3Instead of having to hide his modesty, he was able to strike a classic Mickey pose.4The score was by Bruce Broughton.5Credited as [sic] Pytor Illyich Tchaikovsky.