When Dolls Talk Back: A Brief History Content from the guide to life, the universe and everything 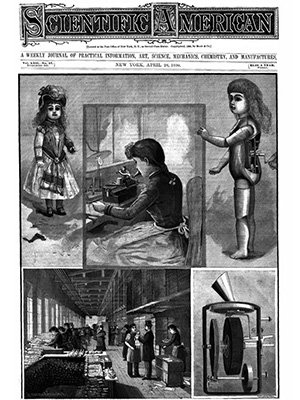 Talking dolls: charming or creepy? What do you think?

In 1890, Thomas Edison found out that customers weren't exactly ready for the talking doll. It didn't help that his model stood 22 inches/55.88 cm tall and weighed a hefty four pounds/1.8 kg. It had a porcelain head - how adorable. Its tin torso housed a genuine Edison cylinder phonograph, which had to be cranked. In other words, it had far too many moving parts and kept breaking down. Worse, the sound reproduction was none too good: as a Washington Post headline grumped, 'They would be more interesting if you could understand what they say.' The price didn't help, either – a doll plus clothes cost a whopping $20, way out of range in cash-poor 1890. After selling fewer than 500 of the 'little monsters' (Edison's words), the inventor shrugged and moved on. Today, these little monsters are rare collectors' items, fetching prices as high as $25,000 on the antiques market.

The Edison Talking Doll made history in its own way. The 18 or so young ladies hired to shout into recording machines – each record had to be made individually, no duplicating equipment – became the first employed recording artists. What did they sound like? You can listen for yourself, courtesy of the US National Park Service1. You can empathise with these early talents as they tried to articulate 'Twinkle, Twinkle, Little Star', only to have complaints appear in the Washington Post. Matching audio to appearance produces a jarring effect2. No wonder little girls didn't love this.

You Can Tell It's Mattel3

In 1959, the Mattel toy company (founded in 1945 by 'Matt' Matson and Elliott Handler, get it?) decided that the world was finally ready for a real talking doll. They invented Chatty Cathy, a talking child surrogate. Cathy had different outfits in her wardrobe, including a winter coat and pyjamas, so that anxious play-mothers could dress her appropriately. Cathy could say 11 different things, including 'I love you'.

Cathy said this because June Foray told her to. Ms Foray, sometimes referred to as 'the female Mel Blanc', was the extremely talented voiceover artist responsible for Disney characters such as Lucifer the Cat in Cinderella, and Rocket J Squirrel in Ward and Scott's Rocky and Bullwinkle, among others. Sometime between 1890 and 1959, somebody had licked the reproduction problem, so now all the Chatty Cathys in the world could have June Foray's voice, and she only had to say 'I love you' once. While other recordings were tried for newer versions of Chatty Cathy, June Foray's voice was so distinctive that Mattel regarded her version as 'official'.

Which is probably why Rod Serling asked her to do some voiceover work for him in 1963.

'My name is Talky Tina, and you'd better be nice to me.'

Rod Serling is world-famous for his science fiction/horror anthology television series The Twilight Zone. The series originally aired from 1959 to 1964, but it is safe to say that these haunting half-hour stories have never been off the air for very long. Generations have found this collection of speculative tales by turns scary, amusing, and thought-provoking. One of the more memorable episodes is called Living Doll: it stars Telly Savalas as a not-very-nice stepfather, and an uncredited June Foray as the voice of Talky Tina, a little girl's new doll and self-appointed protector. The story is far ahead of its time in recognizing some uncomfortable psychological truths about family dynamics.

Talky Tina – a doll that does everything, a lifelike creation of plastic and springs and painted smile. To Erich Streator, she is a most unwelcome addition to his household, but without her, he'd never enter The Twilight Zone.
- Rod Serling's introduction to Living Doll

Talky Tina appears at first to be a charming child's toy. But when Erich Streator is alone with the doll, it launches an escalating campaign of threats against him. Tina's cheerful taunts drive Streator to desperate but futile measures, until at last... well, give up and watch it for yourself. (But keep the lights on: these actors are good, even if the production values are low.) One reason for the lasting fame of this episode is June Foray's performance as Talky Tina, which is pretty amazing considering she created all this evil in a sound booth, without meeting the other actors or Serling.

So, Chatty Cathy: Plastic pal who's fun to be with, or another creepy invention? You decide.

Which is more popular – the cute version of the plastic chatterbox, or the scary one?

Chatty Cathy was much more popular than Edison's talking doll. She sold a lot better, throughout the 1960s and 1970s. In 2007 and 2010, nostalgic former children could even buy Chatty Cathy keepsake ornaments from Hallmark. There are far more Chatty Cathy than Edison dolls around, which is probably why a vintage Cathy doll will only set you back around $20 on eBay. The rarer Canadian version may go for as much as $175. (We understand that, among other variations, the Canadian doll has a different freckle pattern.)

On the other hand, at the time of writing, a Talky Tina doll that says, 'My name is Talky Tina, and you'll be sorry,' is selling for $599.99+$20 shipping and handling on Amazon. It does feature authentic sampled dialogue from the original Twilight Zone episode. So either way you go, you'll be listening to June Foray.

If you get tired of playing with dolls, you can always grab a couple of mobiles and make your Siris talk to each other.

1The National Park Service (NPS) is in charge of the Thomas Edison National Park in Orange, New Jersey.2Though the 1890 versions were much better than the 1888 prototype. That was the one in which the cute little girl doll started talking... and sounded exactly like Thomas Alva Edison. 'Oh, dear mamma, your dollie is tired now; put me in my little bed, dear mamma,' just doesn't have the same effect from a baritone.3From the 1960s advertising slogan that continues, 'It's swell!' These things existed.