Drinking Your Way Through the Apocalypse: The DIY Fallout Shelter Snack Bar Content from the guide to life, the universe and everything 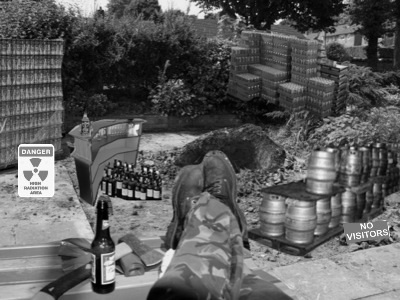 For those millennials who believe that the threat of nuclear war ended shortly after the Cuban Missile Crisis of 19621, we offer a fine example of Cold War planning from the year 1980. It's potentially life-saving, it's decorative, and according to the Federal Emergency Management Agency (FEMA), it will take only five of your man-days to set up.

We refer, of course, to the Home Fallout Shelter Snack Bar. The one you're going to build in your basement in case Mr Reagan pushes that button. With a little effort, you, too, can ride out World War III in the comfort of your own home, with plenty of drinks2 and little cocktail wieners to tide you over.

During the early Cold War, one of the measures proposed in the United States for dealing with possible nuclear attack was to build family fallout shelters in suburban backyards. There were companies that offered this service, as well as plans for do-it-yourselfers available from the government. The propaganda of the time concentrated on two aspects of the problem: fear, and the patriotism involved in participating in survival. Survival was patriotic, after all – it showed the Commies they couldn't win, and it ensured that there would be enough stalwart Americans left to rebuild after the nuclear holocaust. The radio ads were both thrilling and a bit space-age.

Fallout shelters were also controversial in some quarters. Some fallout shelter salesmen recommended that families building fallout shelters make another key purchase: a shotgun. After all, when the sirens blew for the 15-minute warning, less-prepared neighbours were likely to rush your shelter in panic. One might need to fend them off. The possibility of neighbour-on-neighbour violence, as opposed to death from the skies, gave some prospective customers pause.

Science fiction writer Rod Serling produced an episode of his series The Twilight Zone called The Shelter. Serling regarded the question of building fallout shelters as an ethical dilemma. Within two days of its original 29 September, 1961 airing, the show had generated 1,300 pieces of mail. Serling himself mulled over the issue and decided not to build a shelter. In a radio interview he said, 'What kind of a world are we going to? I mean, if there's rubble, and poisoned water, and inedible food, and my kids have to live like wild beasts, I'm not particularly sure I want to survive in that kind of a world3.'

The fashion for backyard fallout shelters declined after the Cuban Missile Crisis of October 1962. The nuclear threat seemed less imminent, particularly in the heady days of détente under Nixon, Ford and Carter. But in 1980, the United States welcomed a new president with open arms: Ronald Reagan, former movie star and now leader of the Free World. During his first term Reagan took a hard line against the Soviet Union, which he termed the 'evil empire'. Reagan's rhetoric alarmed a lot of people, particularly when they realised that he was the man with the nuclear codes. Reagan's sense of humour could be worrying. In 1984, he made a joke while testing a microphone before a radio speech, 'My fellow Americans, I am pleased to tell you I just signed legislation which outlaws Russia forever. The bombing begins in five minutes.' Some people were not amused, including the nervous Russians.

During this period, the bestseller lists were full of apocalyptic stuff, from Jonathan Schell's chilling but factual The Fate of the Earth to the fact-filled (but fictional) novel by William Prochnau, Trinity's Child. Cinemagoers saw The Day After, an influential film depicting the effects of nuclear war on the American heartland. Even if they chose science fiction over fact, they could not escape uncomfortable premonitions of doom: the Terminator series had its beginnings in this nervous era.

So it was small wonder that FEMA – the Federal Emergency Management Agency, the government arm tasked with cleaning up messes such as fire, flood and nuclear disaster – should dust off the Missile Crisis folder and reissue some of those emergency preparedness bulletins. Concerned citizens, for the use of. After all, if Mr Reagan wasn't joking next time, and if the 'Star Wars' shield didn't hold4, it might be best to have a backup plan.

How to Prepare for Nuclear Holocaust in Your Spare Time

What follows was never a secret. In fact, the information was available, totally public domain and free gratis, from the start. If you signed up for FEMA's home-study course in 'radiological emergency management5', you got these bulletins and plans on a regular basis. 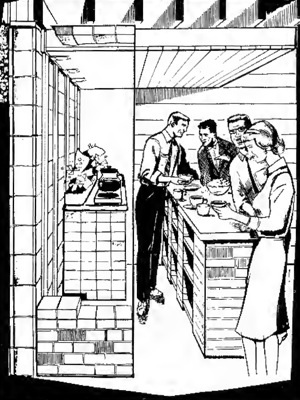 From the cover, it is obvious that this 1980 version of the gracious-living answer to nuclear survival dates from the Cuban Missile Crisis era. The cast of Mad Men appear to be gathered in the bomb shelter, while Don Draper mixes drinks and keeps the chat lighthearted. The setting looks idyllic from a mid-century capitalist viewpoint. But wait! What if, suddenly, those wretched communists attack? Out of the blue, as we always knew they would? Why, nothing simpler. Just fold down the bar's false roof, add some cinder blocks and you can get back to pretending the latest one-liner is funny. Just be sure there are no more than six people at the party. 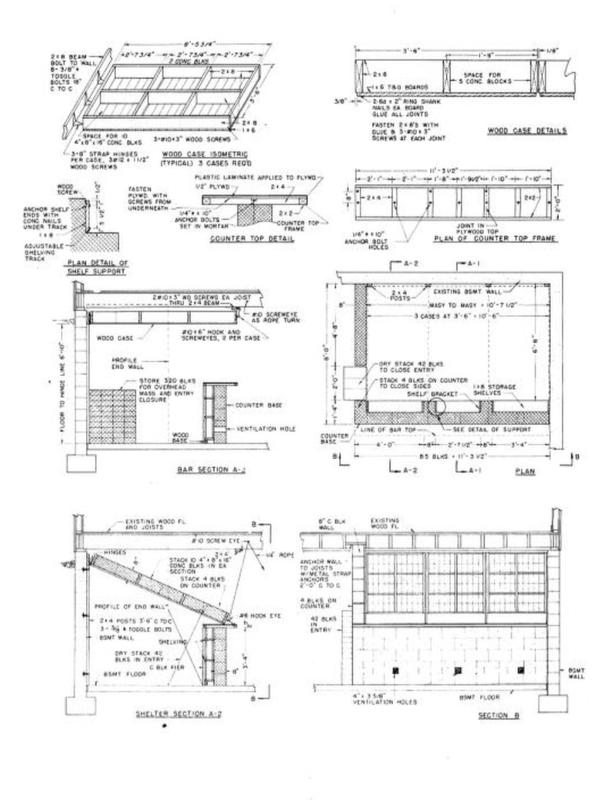 Step 1: Own your land. Or at least have a mortgage on it. After the bombs hit, it will be hard for the bank to collect.

Step 2: Take five days off work. Or enlist another friend or two, and adjust the schedule accordingly. Remember, it takes 'five man-days'. We apologise for the sexist language, but it was the Cold War, and Reagan was president.

Step 3: Collect your materials. You will need:

Step 4: Gather your team and get to work. Follow these easy methods, and within five man-days you will have your own bastion of democracy/cool underground bar.

You see how easy this is? While working, you and your friends can sing cheerful and appropriate songs, such as 'We'll All Go Together When We Go'. Or play a vintage antiwar radio broadcast with Pete Seeger and others.

If you choose to build your shelter, whether for the retro Cold War chic of it all, or as a curious exercise in historical re-enactment, as a hedge against the collapse of Western Civilisation, or even as a cool place to take girls, enjoy your home away from home, courtesy of FEMA. Just pray to whatever you believe in that you never have to use that last step: 'Occupy shelter and fill entry with blocks or bricks.'

1Who are we kidding? It is unlikely that any millennial is concerned with history reaching that far back into the mists of time.2Make mine a Pan-Galactic Gargle Blaster.3Serling was interviewed by Bob Crane, a popular Los Angeles radio host. Excerpts and further information are available here. The episode The Shelter can be found on various video sites, including CBS, its original broadcaster.4The Strategic Defense Initiative, or SDI, was supposed to provide a 'nuclear umbrella'. It didn't work, and the program was popularly dubbed 'Star Wars', on the general belief that this sort of nuclear planning belonged to science fiction, and that somebody had been watching too many movies.5Still available, and you can work online now. It's ten hours' worth of study.6Square-edge boards may be used.7One pound=453.5923 grams.8lbs=pounds. See above.91 pint=473.176 ml. Figure it out.10If you have survived inches by now, you should be able to calculate feet. 1 foot=12 inches.11Drill lead holes 5/32" in diameter, 1-3/8'' deep and shank lead holes 3/16" in diameter, 3/8" deep.