Watching Star Wars - What is The Correct Order? Content from the guide to life, the universe and everything 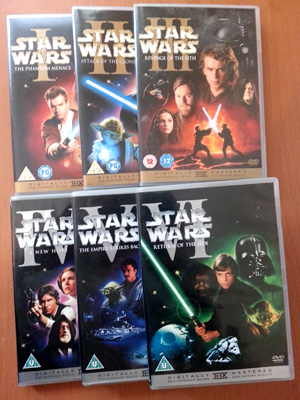 Watching a series of films, on the face of it, is one of the simplest activities available. You simply watch the first film, then progress on to the second. You then continue on in this way, following second with third, until you run out of films. Or out of patience with the inevitable decline in quality.

So why should Star Wars be any different? Why, upon the release of the sixth Star Wars film in 2005, did Star Wars fandom embark on a decade-long argument about the correct way to watch George Lucas' sprawling space opera?

Why Can't You Watch Star Wars in Order?

This innocuous inquiry raises a follow-up question. What is the 'right' order for the Star Wars saga*?

The problem stems from the fact that George Lucas didn't make the Star Wars films in a sensible way – such as starting with the first film and ending with the sixth. He made Star Wars in 1977, which was then hastily re-titled Star Wars Episode IV: A New Hope on the release of the second Star Wars film, Episode V: The Empire Strikes Back (1980). The 'Original' trilogy was then rounded off with 1983's Episode VI: Return of the Jedi.

The fourth Star Wars film, Episode I: The Phantom Menace, was then released in 1999*, meaning that there were now two ways to watch Star Wars. Both of which completely spoil the revelations the series is famed for.

WARNING: If you don't want to spoil these revelations for yourself, just scroll down until you see the subheader entitled 'So How Should I Watch Star Wars?' Don't worry, you probably won't understand much of the intervening text anyway.

Even if you've never seen Star Wars, you'll have heard the infamous 'Luke, I am your father!' misquote*. This reveal shocked audiences in 1980, and it still has the potential to shock audiences in the future.

Unless you watch Star Wars in numerical order. Because Episode III makes it abundantly clear that Darth Vader is Anakin Skywalker – series protagonist Luke Skywalker's father. Into the bargain, it also tells you who Luke's sister is, just in case you were worried about enjoying Episode VI: Return of the Jedi's big reveal.

What's more, thanks to George Lucas' insistence on adding new footage to his films, the final scene of Return of the Jedi makes no sense in chronological order. In this scene we're introduced to the glowing blue actor Hayden Christensen, who makes sexy eyes at the camera. Without the context provided by Episode III, we have no idea that he's supposed to be a glowing blue Darth Vader, making sexy eyes at the camera. Obviously, this wouldn't be an issue if Mr Christensen hadn't been forcibly inserted into the DVD edition of the movie, but that's a different can of worms altogether.

No. Because you'll then spoil the reveals that Anakin Skywalker becomes Darth Vader and that Chancellor Palpatine becomes The Emperor.

What's more, you'll also have run out of genuinely great Star Wars films only half way through your viewing – leaving with you with the 'so bad it's bad', 'so bad it's awful', and 'seriously, the last one was so bad that this looks sort of nearly good?'

A Better Way to Watch? The Ernst Rister Order

Ernst Rister thought there was a better way. And it's this:

The logic behind this is as follows. Films 4-6 are Luke Skywalker's story. This is the most compelling story of the series, and works brilliantly to bookend the saga. What's more, this order only ruins one revelation (Luke's sister) and ramps up the tension of Episode V's cliffhanger ending.

Unfortunately though, this order involves following the series' undoubted high point (V: The Empire Strikes Back) with a film filled with fart jokes, CGI amphibians and obnoxious child actors.

The Machete Order - The Best Way to Watch Star Wars?

Which is why someone on the No Machete Juggling blog came up with the Machete Order:

As you'll notice, this is the Ernst Rister order, with Episode I taken out. This apparently makes the series more coherent by removing a lot of plot holes introduced in Episode I, and means we don't need to put up with Jar Jar Binks.

But, it still means we're forced to suffer through Episode II - a film tied with Episode I for the title of the worst Star Wars film to date*, we still have to deal with plot holes from episodes II and III.

So if the chronological and numerical orders don't work, and the Rister and Machete Orders have problems, what is the right way to watch Star Wars?

So How Should I Watch Star Wars?

If you've watched Star Wars before, here is the best possible viewing order for any Star Wars marathons you have planned:

No need to suffer through those prequels again. And you might want to shut your eyes for the very last scene, because it'll only remind you of the prequels.

If you haven't watched Star Wars before, here is the correct way to introduce yourself to the Star Wars saga:

There you go, three classic films telling the story of a farm boy who saves a princess, and then the galaxy. Once you've watched them, you may want to watch the prequel trilogy of I, II and III.

We advise against it though. They're rubbish.